On Benghazi Ed Markey had the chance to be loyal Democratic politician or truth-seeker, he chose politician

Congressman Ed Markey is the Democratic candidate for the Special Election to fill the Senate seat vacated by John Kerry.   Markey is just a few points ahead of challenger Gabriel Gomez.

Markey has come under intense criticism for his first negative ad against Gomez, which depicted the former Navy pilot and SEAL with an overlay of Osama bin Laden, leading the Gomez campaign to demand that Markey take down the “despicable video.”

A tweet from Markey’s official, certified Twitter account on October 22, 2012, should generate as much if not more indignation.  If it were up to Markey, we never would have known about how the Obama administration misled the public about the attack on the Benghazi consulate.

After the September 11, 2012 Benghazi attack, there were growing concerns about Obama administration talking points that the attack resulted from a spontaneous protest over a movie about Mohammed.  It was politically inconvenient to admit that Benghazi was a pre-planned al-Qaeda-related attack and that the Obama administration ignored warning signs.

Those concerns reverberated in the presidential campaign, and reached a crescendo in the days leading up to the third and final presidential debate on October 22, 2012.

The Romney campaign was hammering the cover-up, including the movie, the talking points and whether the military could have helped rescue the Americans.  The cover-up was so central that on the day of the third debate — October 22, 2012 — left-wing and pro-Obama mainstream media launched a full-throttled defense of Obama and push-back against Romney:

Chris Matthews even led off his pre-debate coverage by confronting a young onlooker, insisting that the consulate attack was over the movie:

Onlooker: “[Romney] doesn’t cover up scandals in the Middle East…. [Obama] said there was a video it was not about the video.”

Indeed, the lead-in to the very first question from Bob Schieffer framed how central concerns about misleading talking points were:

The first question, and it concerns Libya, the controversy over what happened there continues. Four Americans are dead, including an American ambassador. Questions remain. What happened? What caused it? Was it spontaneous?

Was it an intelligence failure? Was it a policy failure? Was there an attempt to mislead people about what really happened?

That is where Markey comes in.

Of all people, Markey should have been sensitive to the need to get to the truth. One of Markey’s constituents was killed in the attack, and Markey met the body upon return to the United States.

Markey tweeted that Romney’s concerns about Benghazi were a “bogus theory”: 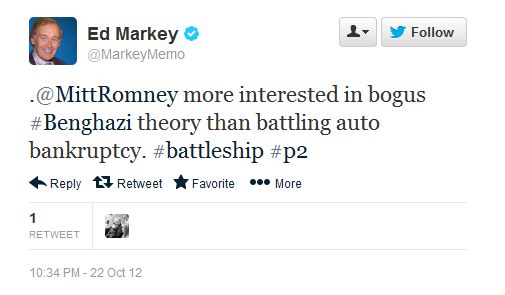 [Note – on some browsers the tweet shows up as 9:34 p.m., but based on the sequence of Markey’s tweets that night, we believe the correct time is 10:34 p.m. as shown on this screenshot.]

As we know, the concerns were not a “bogus theory.” That was just the loyal Democratic party line.

Due to the determination of Congressmen other than Markey, facts have been uncovered demonstrating that the Obama administration’s Benghazi Talking Points had been changed to obscure the truth, and whistleblowers are disputing the movie and protest talking points.

Even Bob Schieffer talks openly of a “cover-up.”

Even Congressman Stephen Lynch (D-MA), who was defeated by Markey in the primary, acknowledges the falsehoods:

Now it’s time for Ed Markey to fess up, apologize for calling Benghazi concerns “bogus,” and to put the truth about Benghazi ahead of being a loyal Democratic politician.

Now it’s time to make sure that Massachusetts doesn’t put this man into the vacant Senate seat!

Instapundit » Blog Archive » GRAPHIC: How The Benghazi Talking Points Were Changed. UPDATE: Flashback — Ed Markey called B… | May 6, 2013 at 9:08 am

Markey is a Massachusetts Hack of the first order. The Dems in this state will pull out the stops to elect him to Kerry’s seat. No more surprises like with Brown.

The beauty of being one of those liberal media outlets is that being liberal means never having to say you’re sorry.

I just wish Romney would spend a few bucks and replay the Candy Crowley Obama defense during the debates and some of the aforementioned liberal hack statements, followed by “I told you so”, or “you get the government you deserve”, but he is too nice, I am afraid.

Wow, I read that line up:

and it almost took my breath away.

They all knew they were lying! They stood against truth!

Here’s to hoping Maryland Ed decides to stage a photo op in a tank. He’s the only person I know that makes Dukakis look manly.

That’s the thing about theories, sometimes they are true.

[…] Which is in Stark Con­trast to what the man who defeated him in the Demo­c­rat Pri­mary said before the elec­tion: […]