I refuse to be drawn back into a Massachusetts Senate race where Ed Markey surely has a wide double-digit lead, having served for 37 years in Congress and being a well-known liberal stalwart.

A new survey of registered voters finds Congressman Ed Markey (D) with a 6 point lead over Republican candidate Gabriel Gomez 42 percent to 36 percent with 797 respondents. The Emerson College Polling Society (ECPS) survey is the first to look at the US Senate seat vacated by Secretary of State John Kerry since the Primary election. There was a 3.4 percent margin of error in the ECPS survey.

According to Felix Chen, President of ECPS, there is a post primary bounce for Gomez, and while the race is currently very close, it may only be a honeymoon period for the Republican who was a virtual unknown just a few months ago.

Both Markey and Gomez have high favorability ratings at 48% and 45%, but Markey also carries a high unfavorable rating of 37%, compared to Gomez who is at 25%. According to Chen, the results suggest Markey may have a problem attacking Gomez, a situation similar to that faced by Scott Brown when he attacked Elizabeth Warren in the 2012 Election; Warren like Gomez had high favorability ratings.

The survey also suggests that Independents are breaking for Gomez at a nearly 2 to 1 rate (46% to 25%) which is typically the ratio that Republicans need to be successful in Statewide Elections here in the Bay state.

There appears to be a divide among voters by gender as well. Markey has 46% of the female vote to Gomez at 29% but Gomez captures 44% of the male vote to Markey at 37%.

The poll is by an Emerson College student-run polling society, but from the website it appears to be under faculty supervision.  The full results and internals of the poll are here, and the party breakdown seems to be in line with recent party identification in Massachusetts.

Both candidates have similar favorable, but Markey starts out with higher unfavorable.  Expect Dems to work hard to bring Gomez’s unfavorable up. 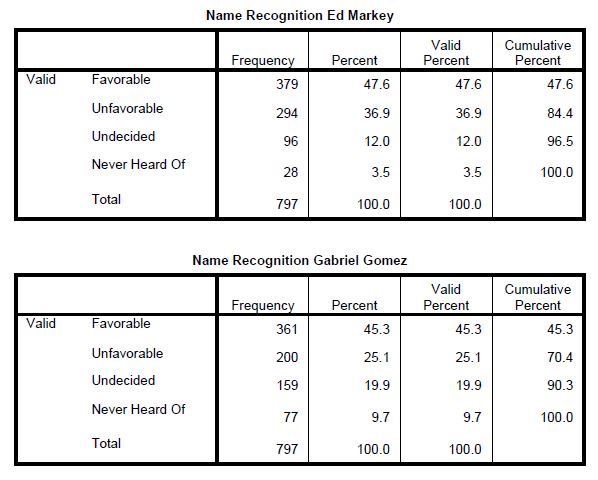 Surely PPP is going to puncture this narrative.  Oh wait:

Is this enough to draw Legal Insurrection back into a Massachusetts Senate race?

Whom the Gods would destroy, first they torment with trying to win a Massachusetts Senate seat for a Republican.

Does that answer your question?

Update — Looks like Markey is reading the same polls, because he just launched his first attack ad on Gomez, featuring a split screen with Gomez and Osama bin Laden: 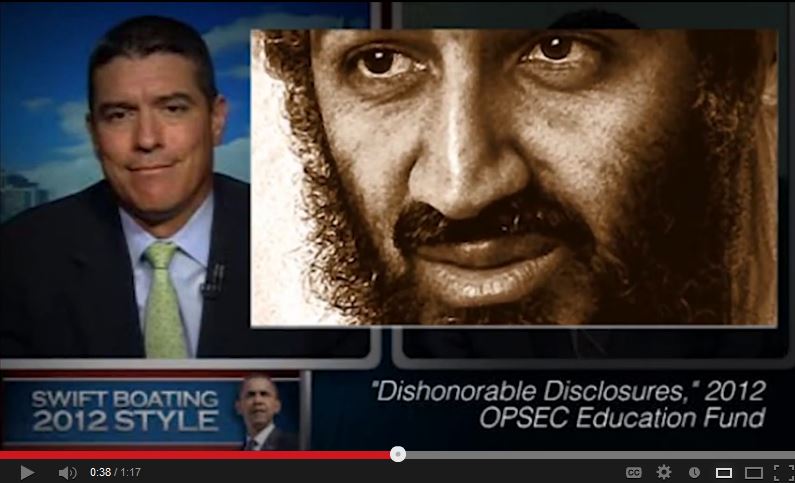 The Poll demonstrates why women shouldn’t be allowed to vote. (Don’t even start; I’m female and disgusted with bone headed liberal women – but I repeat myself.)

I’m female and I agree.

So we’ve got a Democrat Liberal versus a Republican Liberal. Why should I care again?

moderate socialist vs moderate democrat. i’m not inclined to support democrats even when they place an (R) after their names. and this doesn’t carry nearly the same symbolic significance that the scott brown race did.

and imagine having gomez in the senate to gang up with rubio against cruz. no thanks. besides, MA is D+10 and Markey’s district is D+16. this should be a no-brainer for the people of the PROM.

That ad is pretty lame. Gomez is a big meanie for saying things chocolate jesus doesn’t like and lacks the manhood to deal with it.

If massatwoshits doesn’t want Gomez I would like to think he would be welcome in Colorado. The kleptocracy is working night and day to give us a blue-fail makeover.

Actually he’s pretty much the definition of a modern (R). I’ll vote for him I guess, but not contributing anything. He’ll make Scott Brown look like a true conservative.

No way I’ll vote for him. I didn’t vote for Brown first time, either. I voted for Brown against the Cherokee, but I kinda regret it now.

UBL ? What difference at this point does it make?

So many conservatives are disgusted that Gomez is the nominee. There’s talk of not voting. Please, I beg of you to support Gomez and vote for him. No, he’s not the perfect candidate, but you have to consider the bigger picture. There could be a lot at stake here regardless of how Gomez votes and here’s why.

To me, this election will be about one thing: demoralizing the Dems. Remember, to a liberal, everything in politics is black and white despite what they claim. Gomez could be a bigger socialist than Obama, but all that matters to them is he has an “R” next to his name. So they will do what they can to paint him as a right wing extremist. We saw the outright lies about Brown and Romney and it all worked. It was so frustrating to us but only because we allowed it to happen by not voting because Brown/Romney weren’t pure enough. If we can show them that those tactics won’t work this time, and won’t even work in Massachusetts, then that will be demoralizing for them.

Another point to be made is the big picture. Remember what happened after Brown was elected in 2010. His election was such a shock that the narrative changed and ended up putting the Dems on the defensive. That momentum carried until November and look what happened in the House. The same thing could happen this time. The Dems are already on the defensive over Obamacare and the failure of the gun control bill. A Republican winning in MA would further demoralize them and that could easily be carried into the 2014 election season, especially with the rollout of Obamacare next year. Remember, it doesn’t matter to them if Gomez would have voted for Obamacare, all that matters is he has an “R” next to his name.

So in my opinion, this is actually an important election and no conservative should sit it out due to impurity of position. Think of the bigger picture and how the Dems would react to his election, and in the long run, a Gomez victory could prove beneficial to us.