The game plays out every time there is a high-profile act of criminal violence.  There is an immediate media and left-blogsphere search to tie the shooter to a “right-wing” entity … usually the Tea Party movement.

Groups like the Southern Poverty Law Center have created a fundraising machine off of such guilt-by-association fear mongering.

Repeatedly we have seen the attempt to guilt the “right-wing” by association end with a complete lack of evidence of “right-wing” involvement, and sometimes with revelations that the shooter was left-wing and/or a Democrat:

By contrast, there was no media attempt to suggest Obama supporters or liberals in general were violent because an Obama-adoring ex-cop went on a murder spree.  To the contrary, that information was buried.

When it turned out that the Discovery Channel hostage taker was a liberal, Media Matters even cautioned not to draw conclusions:

So when it was revealed that Newtown, CT murderer Adam Lanza and his mother had NRA “certificates,” the media pounced to play up the NRA connection to create guilt by association. 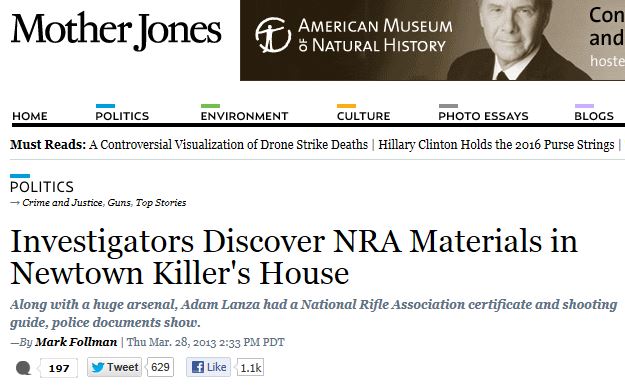 Not surprisingly, Piers Morgan was in the lead: 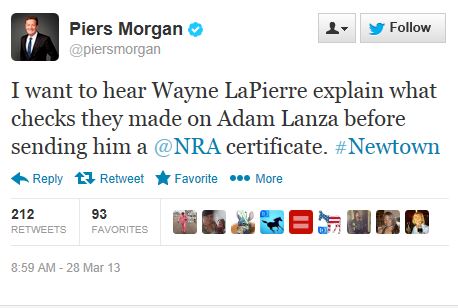 The NRA has reacted vigorously by searching its records and finding that Lanza and his mother were not members.

So what if Lanza had been an NRA member?

Would that have made the NRA and its 5 million members guilty by association?

Of course not.  The NRA promotes safe gun ownership and use, and it training courses emphasize safety.  I know that because I took one of those courses, and I recently joined the NRA (along with the Electronic Frontier Foundation).

While I understand the desire of the NRA to push back against media deception, that’s a necessary but ultimately losing game.  Eventually someone who is an NRA member will commit a murder, not because of membership in the NRA but despite it.

Like the proverbial broken clock, the ghouls eventually will be right.  And if you have accepted their premise that membership or association equals guilt by association, we are bound to lose the argument eventually.

That is how we lose, by playing on their terms.

This is how we win, by pushing back relentlessly on our terms (via Common Cents):

We can only hope that Andrew Breitbart’s prediction (that the “mainstream” media would all be gone in five years) comes true.

don’t you talk dirty to me

Dana Loesch is really good at push back. Notice how we went from gay marriage right back into the gun battle? I guess that is all part of the Republicans super secret plan to repeal Obamacare. If we talk about guns and gays no one will notice the undercover efforts to repeal the law or something.

Just remember when a leftist calls you a ‘hater’, they’re only projecting.

I think you keyed on the correct issue professor. By vigorously denying that they were members they are validating the claim of guilt by association.

Van Jones is a communist. Why would ANYONE want to take his opinion on gun control? And since we’re talking about guilt by association, does this make Piers Morgan a communist as well?

“Jones had planned to move to Washington, DC, and had already landed a job and an apartment there. But in jail, he said, “I met all these young radical people of color — I mean really radical, communists and anarchists. And it was, like, ‘This is what I need to be a part of.'” Although he already had a plane ticket, he decided to stay in San Francisco. “I spent the next ten years of my life working with a lot of those people I met in jail, trying to be a revolutionary.” In the months that followed, he let go of any lingering thoughts that he might fit in with the status quo. “I was a rowdy nationalist on April 28th, and then the verdicts came down on April 29th,” he said. “By August, I was a communist.”” – Van Jones

I found the clip barely watchable — six minutes of three people trying to interrupt each another. I suppose Dana Loesch did as well as can be expected but there has to be a better way to figure out and subvert these infantile formats. My only suggestion is to push even harder on simple points and refuse to allow conversation to move forward until the point is settled in your (her) favor. She came close but still got filibustered a few times.

Was Susan Smith a AAA member when she drowned her kids in a car?

To second the Prof., I recently took the NRA course, joined the NRA, and got licensed to carry in MA. Exercise your rights today.

Marxists can only ‘win’ if their opposition plays by the morally adolescent rules defined by Marxists, which are designed for a barely literate, completely innumerate populace virtually incapable of critical thought. Dana gets this. So did Breitbart. Many folks don’t.

One important point she missed with respect to Morgan’s B.S. reference to the general’s ignorant comment – which must be stressed repeatedly in this context – is that the term “assault weapon” is a MANUFACTURED TERM with no consistent definition, created by politicians in their efforts to prevent the civilian population from owning anything remotely capable of resisting a military or para-military force; it was deliberately chosen to conflate semi-auto sporting arms and actual military, select-fire Assault Rifles DESPITE the fact that weapons typically assigned to this manufactured category are used in a very small percentage of actual crimes.

The other point missed in this discussion was the glaring number of deaths in Chicago last year (every year) despite the strictest gun laws in the U.S. What about the “funeral after funeral after funeral” happening in Chicago? Those tragedies aren’t important to ideologues like Morgan and Jones – they don’t propel the left’s narrative.

Considering how the media hype and glamorization of the anti-hero can also be linked to these mass shootings, we need to find out what newspapers these killers read and what TV shows they watch and see if their car radio has a NPR station preset.

Wonder how many child molesters are in the ACLU. And how about that NAACP officer attacking the rape victim in Steubenville?

I’m told the police found a Harvard diploma when they searched Amy Bishop’s home. Come to think of it, Ted Kaczynski had one of those diplomas too. What the hell is wrong with Harvard?

An NRA certificate is just a piece of paper with your name written on it. An instructor hands the certificate out if you complete an NRA sanctioned firearms class or match. It is NOT an NRA membership. I will be shooting in a sanctioned CMP (Civilian Marksmanship Program) match tomorrow and will receive a similar certificate.

The certificate is handed out upon completion of the course. Nothing is mailed by the NRA. The instructor does not have to even be an NRA licensed firearm instructor. The course just has to follow the rules outlined by the NRA for that particular shooting discipline.

Was misogynist Kennedy driving while Democrat when he drowned Mary Jo and left the scene to cover his political arse? Yes, but that doesn’t make all Democrats guilty, except they chose him to be their leader. Same with Clinton and his personal assaults/war on women.

Obama lies about Benghazi, about Obamacare reducing costs, about reducing the deficit by half … he lies constantly. That doesn’t make all Democrats communist liars, but they are all guilty for choosing one to lead them.

My point is they are so darn guilty, that their only recourse is character assassination of any that reveal their crimes. With Alinsky’s subversive tactics, they always seek to accuse and feign outrage. Hollywood and the media amplify their psychodrama ten fold.

People were outraged that an Iowa paper revealed which schools were left unguarded. But Obama still screams that all children should be left unguarded, apparently so he can have more victims to prop up on his stage, in his never ending campaign to shift blame to the law abiding for his gun free terror zones.

ALL the blame should be shifted to the “gun free zone” policy of the left. They are perfectly willing to let children be endangered and die so they can bask in their self righteousness of “see, I told you guns kill children”.

Chrissy Matthews was surely overjoyed that Newtown happened, just as he was glad for Big Sandy. “THEY” never admit to the planned liability of leaving those kids and their guardians defenseless. Manufactured crisis IS their game plan. We see it in energy, healthcare, the budget …

I attended a Town Hall meeting last night in Des Plaines, Illinois, hosted by Rep. Marty Moylan. During the ‘gun rights’ discussion, one of the females in the crowd brought up the topic of schools being ‘Gun Free Zones’ and asked who’ll protect the children? To the amazement of the crowd, the Rep. quickly pointed out, “that’s not up to me, that’s up to the Police…!” Anyone care to take a guess which party he belongs to???

I’m an NRA member. I’m a NRA certified instructor. Does that somehow make me responsible for Adam Lanza?

When someone passes an NRA sanctioned training class, do they get some sort of document? A certificate, perhaps?

You would get a course completion certificate.

Or, you could take my approach and simply not give a damn what the Left says anymore.