Another one in LukeHandCool’s New Roads School series (also here), taken a few days after the election:

I think each and every one of us feels like a matador now … not in a bullring, but at the Running of the Bulls.

Let us join the left in battle in the popular culture. Culture is the whole ballgame. Let us use wit and common sense as a cape to make them charge wildly. Let us Work!

We are The Lonely Bull(sh*t Fighters).

Hope you can use this picture (and give us a tune). Now politics is over they say. I wonder if getting to the bottom of Benghazi would be considered politics? Or work to be done?

I wonder if the school’s Administer of Signage initially wanted to write “Work Forward!” but ran out of letters? 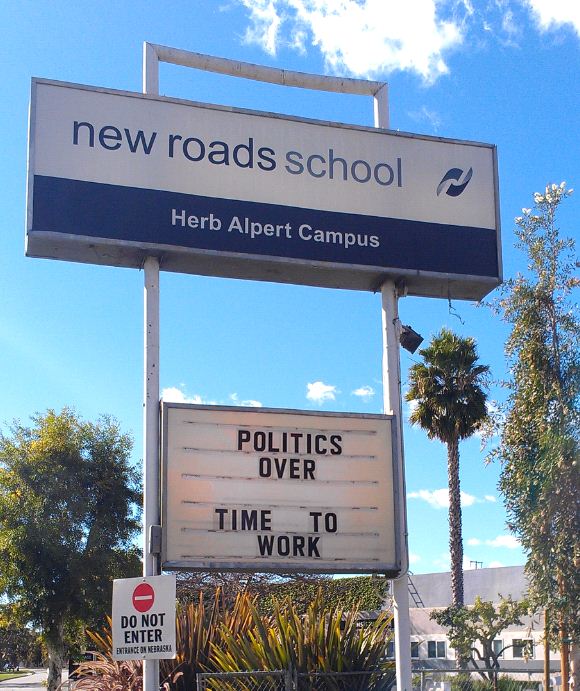 You want Lonely Bullfighter? I hope you can handle 14 minutes of it:

Did you know the NEA has come up with a lucrative training students for values-in-action program it calls Project Love?

And that it wants no more talk of Red and Blue America and calls its social and emotional character education program Purple America as a result? http://www.invisibleserfscollar.com/does-purple-america-come-with-a-toy-dinosaur-or-is-it-just-more-sel/

Now nothing gives a better tool for bullying students than making affective “Growth” in desired values, attitudes, and beliefs towards a more communitarian obligation part of the official measurement of student achievement. Which is precisely what so many of those NCLB waivers to the states actually did.

We have descended into an America where the K-12 schools and colleges and universities (through poorly understood attributes that are part of the Crucible Moment report) are to be measuring what we are to believe and feel and even do politically as required service learning/community engagement. And most of the binding terms are in legal documents few people have read.

We must change the flow of the culture war. Expose the left’s hypocrisy wherever it exists. No more Mr Nice Guy. This is a war which will determine the course and nature of this country.

So many young people take things for granted that my generation would have been amazed at when we were their age. This is where we must win the fight. Ultimately, the low information voter should eventually be getting their information from our side of the aisle.

We must have people willing to present conservative ideals on TV, in the movies, on screen and in newspapers, books and magazines. These days, everything we do is mocked as though it is not good and decent. Or honorable. Or something we, as people, should aspire to. I’ve taken to watching TV from back in the 60s again because the entainment value was very high and the messages were palatable.

Not today. It’s all agenda driven. Traditional values are mocked..considered evil and backward. We have to stop this. We won’t be winning elections if we are unsuccessful.

I’m sorry but I was watching the Golden Globes last night and I was totally offended by it. Ergo, this rant.

As Andrew Breitbart said, politics is downstream from culture.

But the stream of pop culture is now polluted and has gone from entertaining to assaulting the traditions, values, and mores that made us great.

They aren’t poking fun in an endearing way at what made us successful; they’re trying to deligitimize those things and deny our exceptionalism.

We have to find a way to go from triage to counterattack.

Let’s join Greg Gutfeld and Dennis Miller and others and with wit and satire as capes, lead these running bulls off the edge of a cliff.

LukeHandCool (who realizes you could never spell culture without cult, but, you know what he means … unless you’re one of them)

About 40 years ago, 20th Century-Fox had an advertising campaign built around the phrase “Think 20th.” It was posted on a billboard outside the studios on Pico. My late and greatly lamented friend Saul David, producer of such gems as Fantastic Voyage, Our Man Flynt, and Von Ryan’s Express, was a staff producer there at the time. One night he climbed up on the scaffolding below the billboard with a brush and a bucket of black paint…to insert a comma between Think and 20th.

I’ve got a C-note for anyone who finds a way to turn the word “school” on the New Roads sign to “apples”.

Make it a T-coin (trillion-dollar coin) and you’ve got yourself a taker.

You’ll need one for parking meters of the future.

And it will only buy you 5 minutes. I don’t know if I can get up there and paint that in 5 minutes.

It would have been better if they had just put arbeit macht frei on the marquee.