Posted by William A. Jacobson Thursday, February 9, 2012 at 07:00am 19 Comments
More Sharing Options

When I first read it, I thought it said “nag.”

Apologies to Herb, but in being forced to parent against the extracurricular political agendas which seep into the curricula of the liberal Santa Monica-Malibu school system, I often feel like “The Lonely Bulls**t Fighter.”

I guess the Komen Foundation retreating with its tail between its legs still merited a kick from this school.

LukeHandCool (who, as a young boy, would spend an inordinate amount of time staring at the album cover of Herb Alpert & the Tijuana Brass’s “Whipped Cream & Other Delights.” Hence his lifelong love of whipped cream … and other delights). 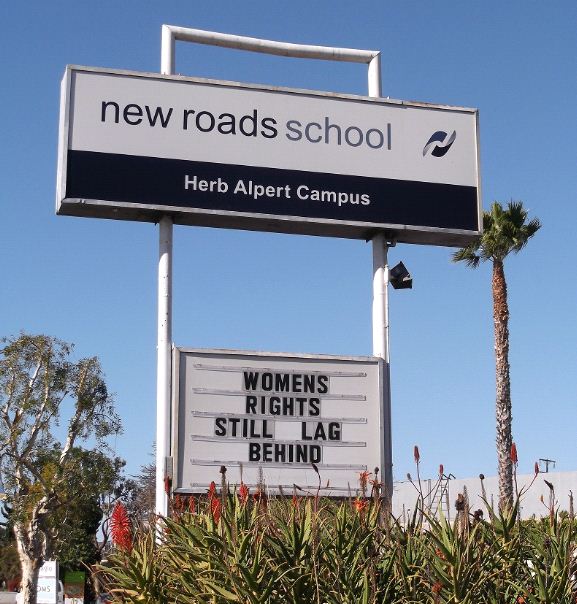 I LOVED that album! (But not for the same reason ;~)

Kitty, I remember holding that album cover with outstretched arms at every conceivable angle to my eyes … hoping against all odds that I could somehow make that two-dimensional plane seem three-dimensional.

Alas, my visual experiments proved futile (I also used a magnifying glass to see if any of the whipped cream was transparent under careful, magnified scrutiny).

I remember reading Steven Spielberg lamenting today’s kids’ addiction to video games. He said sometimes the best thing for a boy to do to expand his imagination is to just sit in a room, bored, with nothing but his day-dreaming imagination to keep him occupied.

Any and all creative synapses of imagination in my brain … I owe to that girl on that album cover. It’s amazing how a young boy’s imagination can run wild with something as simple as an album cover.

I agree with Luke about the cover art.

I know that location well, having passed it many times on Olympic Blvd. Each week (maybe each day?), there’s a new insufferably smug and sanctimonious lefty slogan on the sign. Makes me wonder about the propagandizing that must go on inside.

As for the album cover, I think I now know where my love of Latin jazz comes from. 🙂

The small cross street (it doesn’t run through to Olympic and dead ends at the north side of the school) is … Berkeley.

Wow. They’re like Reverend Wright: still in the ’60s.

I remember when I broke with Women’s Liberation Movement. I was in law school, and I had just finished a course in family law, when I found a recent copy of Ms. magazine in my doctor’s office. I used to read it every month in college, but of course I had stopped reading much of anything outside schoolwork once I had started law school.

There was an article about family law listed on the cover, and I was eager to see their take on the Uniform Child Custody Jurisdiction Act, as well as the many resources women now had to protect themselves and their children in the event of divorce. There had been seismic changes in the law. This was in the mid-80s.

Surprise, surprise. This article was nothing but how women get treated badly in court, don’t have the rights they should, and and get cheated economically every time. It was not designed to help anybody, but to make a person feel helpless and angry, instead of able to deal with some of the harsher realities of life.

I put the magazine down, never bought another. I finished law school, tripled my income afterward, and made a new life for myself and my infant son.

The word “behind” is sexist code.

As a member of my high school band, we played many, many Herb Albert hits at football half times. Oh, the memories that video brought rushing back…

Thanks for the memories…

Oh, and let’s pray that the rest of the country can reverse Left Coast liberalism….

How could they get converts and subscribers if they tell women everthing is rosy? This is a business just like Jesse Jackson runs a business. By fear mongering, envy and hate.

Playwright David “I’m no longer a brain-dead liberal” Mamet lives in Santa Monica and mentions this school and its sign in his new book “The Secret Knowledge.”

Some time ago I posted about my son’s fourth-grade teacher overruling his pick of Ronald Reagan as the subject for his study and performance as an historical Californian.

All the fourth grade students pick a figure, and decorate one of those big tri-fold poster boards with text and graphics and glue on faux-memorabilia. They stand this up on a desk with a large window cut out through which they give their first-person account of the life of the person as that person. Parents mingle around and sit at the opposite side of any desks they choose to listen to those students’ tellings of their subjects’ lives. The parents are free to visit the other fourth grade classrooms, too.

Well, our son was the only kid in class whose choice was overruled by the teacher (she had him do an African-American man … instead of Reagan … I’d never heard of him). This is the same teacher who had a life-sized cardboard President Obama standing in her classroom. I remember talking about it here on LI because I remember it really hit home with DINORightMarie.

Well, last year our daughter was in fourth grade and it was time again for this same PC night of historical Californians. Our daughter had a different teacher than our son … but I didn’t want to go after she chose for our daughter some woman (whom, again, I’d never heard of … but obviously, this figure being a woman was all that mattered!) and, our daughter told me how the teacher modelled to the class how to do the assignment by picking Michelle Obama (who has nothing to do with California) as her example.

My wife told me to get dressed and keep my mouth shut and enjoy the evening. We went and first sat and listened to our daughter. Then I was walking around, trying to decide where to sit next. Liberal figures, celebrities, sports stars, and more liberal figures. Suddenly my wife waved me over to one corner of the room with a big smile. I figured she probably found one that would really aggravate me.

I walked over … and there was this sweetly earnest, adorable Jewish boy just waiting with excitement for somebody to choose to sit at his desk and hear about his life … as Ronald Reagan. I can’t tell you how cute and passionate his telling was. At the end he suddenly presented a jar full of jelly beans, and told me to take as many as I wanted (maybe he sensed I’d be his only customer that night). What a perfect final touch!

I took the clipboard on the desk to write my critique, and he looked a little embarrassed (but quite happy) when I asked him if it would be too much for me to give him an A+++.

As I thanked him and got out of the seat, I saw a proud-looking man standing behind us. I asked if he was the boy’s father. He said he was, and I told him, “This kid is going places, Dad!”

Some time later, reading Mr. Mamet’s book, he talked about living in Santa Monica and mentioned that his children were all in the public school system here. My jaw dropped. That proud father of little Ronald Reagan … that must’ve been …

The next morning, walking our daughter to school, I suddenly remembered what I’d read in bed the night before. I asked our daughter, “You know your classmate, the boy who did President Reagan for his presentation? Is his last name, Mamet?”

It wasn’t even close. Oh well. I’m sure one day I’ll run into him here in town … and make sure he’s familiar with LI.

LukeHandCool (who believes the bullring in the video is the same bullring in Tijuana where Luke enjoyed an afternoon of bullfighting some 20+ years ago).

Just as what happened with unions, the feminist organizations such as Planned Parenthood have become established and entrenched fiefdoms, stakeholders concerned with obtaining grants and donations, growing themselves, and self-perpetuating. Narrow issue “helper” associations that “work for change” will, unfortunately, never announce that their purposes have been achieved and work themselves out of a job. (Why they should NEVER be government funded.)

We remember when that album first appeared in Graymat’s record store window, like it was yesterday.

I’ve always felt kinda left out in that, “what am I, chopped liver” kind of way, having never been discriminated against as a woman. What exactly are their demands? I have to ask, because the goal posts keep getting moved.

“LukeHandCool (who, as a young boy, would spend an inordinate amount of time staring at the album cover of Herb Alpert & the Tijuana Brass’s “Whipped Cream & Other Delights.”

That made me laugh hard.

I must confess, my parents had that album when I was very young, I can remember spending an unhealthy amount of time just staring at it.

I wasn’t even in kindergarten at that point, yet I could not NOT stare it at whenever I could get at it.

As a result, I grew into adulthood with a love for Latinate ladies and whipped cream as well.