With every passing day, Elizabeth Warren’s campaign looks more and more like the Martha Coakley campaign.

An aide to Massachusetts Senate candidate Elizabeth Warren, a Democrat, appears to have knocked the video camera of a Republican tracker after an event this weekend in Martha’s Vineyard. Watch the video below:

As The Weekly Standard points out, this was similar to the attack by a Martha Coakley staffer on John McCormack in December 2009, which I covered at the time including this photo of Coakley watching the assault, This Photo May Change The Election: 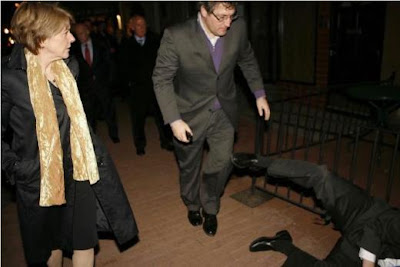 And a staffer shoved her clipboard in Anne’s face as Anne tried to ask Warren questions:

The intolerance the Warren campaign shows for videographers reflects an intolerant political view which seeks to demonize those who disagree on policy issues.

Update:  A reader sends a link to this Warren video, Elizabeth Warren Fights For You, with the classic Warren line “I have thrown rocks at people I think are in the wrong.”

And who could forget Warren’s other most famous line (emphasis mine):

“My first choice is a strong consumer agency,” the Harvard Law professor and federal bailout watchdog said in an interview with the Huffington Post. “My second choice is no agency at all and plenty of blood and teeth left on the floor.”

Update No. 2 – Apparently the Warren campaign is claiming the assailant was just a driver, not a staff member. So what? Why didn’t Warren staff, who were standing all around, intervene? Why didn’t Warren? Are we to believe this driver just decided out of the clear blue to take it on himself to go after a cameraman?

I am sure there are plenty of GOP volunteers to show up at Warren events with flip cameras and other digital recording devices. They will need PTSD therapy afterwards from all the nonsense they will be forced to witness, but it pales compared to the harm of Warren getting into office.

“PTSD therapy”? Hardly; just some Bactine™ and gauze to clean and bind their shredded knuckles after teaching these punks what “revolution!” really means….

The left doesn’t seem to realize that actions like these turn off voters. They want to shut up all opposition but haven’t the sense to do it off camera. This would be a nothing video but for this guy’s actions.

Shhh. Let them show their true colors for all to see. This is just one of many things that makes them so repulsive to decent people.

But the cameraman is lucky that this particular group of warriors did not scalp him.

Barb,
As I’ve said in other sites/threads, when your opponents are intent on sticking their (figurative) dicks in the fan, DONT STOP THEM!!!!!

That’s the key. If they want to do something stupid, and you can get it on tape…let them.

I think it better reflects the fact this is a thin-skinned liar who has advanced via various composites created to give her unearned advantages through a corrupt system of favoritism.

Look, like so many other ancient cultures, the Fukowi tribe to which Warren belongs believes that being photographed sucks a little bit of one’s soul out and onto the film. The violent reaction of the Warren staffer was therefore entirely justified. What, Warren has no right to self-defense???

I thought she was of the Wannabe-go branch of the Cherokee people.

So a Kennedy cousin is driving for Warren now?

In no way did the videographer interfere with Warren or her vehicle. There is no action by either which he impeded.

I guess he trespassed into her Zone of Sanctity.

You mean her Zone of Sanctimonious

Ever notice how much Democrats side with all things antithetical to American tradition and so much of it involves FORCE?
The culture of death in abortion of future generations and euthanasia of those now living,
The very idea that it’s government business to have a say in how you go about finding your own health care,
The thuggish Gay Lobby,
Theft from future generations (debt); theft from current taxpayers (for welfare galore and all other kinds of unconstitutional spending, including funds to foreign countries and hellholes),
Increasing the size and scope of government at all levels,
Increasing all levels of taxation,
The favoring of Islam,
The suppression of Christianity which predictably will worsen,
The embrace of communist and socialist thug governments,

Wait, let me get this straight. Warren aide assaults annoying-but-peaceful video dude and then tells him that unless he leaves the aide will call the police. Um, isn’t the proper response “please do, so I can file charges against you?”

The driver’s “you don’t know who your messing with” comment was sooo democrat. It’s a manifestation of their belief that political elites of their party are above the law and can employ violence to silence those who might question them.

Heh. Imagine the low level staffers – drivers, file clerks, phone bankers, etc. – who’ve dreamt of big things for themselves in Washington DC when their candidate wins, and what happens when they see their candidate begin to tank in the polls. The frustration is enough to make a guy take a poke at random videographers.

Desperation is setting in. Keep it up, LI.

Elizabeth Warren’s aide, who assaulted the videographer warns: “you’re messing with the wrong people”. Did I hear that right? Warren’s aide is threatening a member of the public?

Our betters in the Ruling Class are above the law.

Democrats really do believe that they are better than we mere mortals. That “We the People” crap is interpreted by this Democrat president, with the wink and nod from Dems in Congress (checks and balances; what’s that?), as I can do as I please.

That photo was the exact one that popped into my mind when I read your headline. I wouldn’t have thought it possible, but it looks like Brown will be reelected. Lots of thanks to you, of course, but could they have chosen a worse candidate? You’d think they’d have learned something after the Coakley disaster. Apparently all they learned was to do the same thing all over again–pick a shrill, mean-spirited, haughty, self-satisfied regressive hack, and expect no one to notice.

Too bad the president will be too busy to fly in at the last minute to insult Massachusetts truck owners to a half-empty auditorium of mostly bored students (probably earning extra credit for attending) and paid SEIU thugs. That did wonders last time.

“…could they have chosen a worse candidate?”

Possibly, whoever annointed Obama as the first black president, may have annointed Warren as the first woman president. Massachusetts is the bluest of blue states. Her campaign should have been a slam dunk. Who could guess that her past would catch up with her – and then she opened her mouth This is no longer 2007-2008; she is being vetted and it’s not “racist” to do so.

There was very little “past” to catch up with Obama and a groveling press was very happy to cover what little did come to light.

Oh, I think there was plenty of past to catch up to BO but you’re right about the media covering it for him.

His “past” existed in Bill Ayers’ fairy tales published as obama’s “autobiographies”.

“I have thrown rocks at people I think are in the wrong.”

OK..so beside her hubby (I think) who is the other blind person or persons, male or female, that helped Lizzie get her rocks off?

Sigh. You can smell the Warren campaign’s desperation from several states away…

By the way – the vehicle that Warren gets into, a GMC Yukon XL, gets 15 miles to the gallon.

Not very green, is it! Oh but I forgot: those sorts of rules are just for the little people.

Good catch – you do know, BTW, that just before she ran for office, she traded in her BMW [5-series or 7-series] for a Ford Escort. Also, her home on Linnaean Street in Cambridge is valued at $1.85M. She is just SO middle-class!

No. Ms. Warren was messing with the wrong people, The Indians.

Somewhere deep inside the Cherokee Nation, there are medicine men meeting in ancient convocation, calling down the Big Whoop on this fake Indian and her band of miscreants.

With Great Medicine like this, who the hell needs ObamaCare. The buffalo will soon return…… and bring Bill Murray.

Elizabeth Warren is the admitted head of a fascist movement. Fascists employ thuggery as an exclusive means of getting and retaining power.

Just imagine if this woman gains the power of a US Senator.

Speaking of fascists, I submit that even if Mitt “Obama’s a nice guy!” Romney wins the election, he may never be sworn into office.

There’s a little thing called the “National Defense Resources Preparedness” that Obama write and signed as “Executive Order 13603” under the cover of a corrupt news media, and a parasite of GOP House Speaker (Boehner — who else?).

This is no small thing, and it is worth knowing about — at this point, especially:
http://thefinereport.com/2012/08/even-if-mitt-obamas-a-nice-guy-romney-wins-the-election-he-may-never-be-sworn-into-office/

That is a bit too tinfoil-like for me. No way is that going to happen. No way. The military will make sure that doesn’t happen.

[…] Apparently, no one in the Warren Campaign remembers who Martha Coakley is. […]

Please please please forgive my grabbing at the low-hanging fruit. It’s like having an ear-worm and the only hope of relief is to hear it, sing it or in this case, write it out and inflict the rest of you.

Lizzie Warren, battle-axe
Gave the reporters forty whacks
Though she saw that it was fun
She didn’t know she’d come undone.

Close your door,
Lock and latch it,
Cause here comes Obama
With his Lizzie Warren hatchet.

Not too many signs out here in Central MA yet; most of those few are for Brown. However, I just saw something interesting: a house with a Brown sign added an Obama sign. In other words, Warren is out of bounds for this family despite their support for Obama.

Only a straw in the wind, but a noticeable one.

(Cf. related comments by Rags and yours truly.)

My song dedication to Warren.
(row row row your boat)

Thug, thug, punch a mime
Push the bloggers down!!!

[…] it wasn’t quite as bad as the dustup during the Coakley campaign (as Prof Jacobson reminds us), but it’s still not a smart reaction to an opposition tracker.  A tracker who is likely […]

This is what happens when the rabble gets in the space of the Gentry. Good for you Lizbth, upholding the status of Class.

I lack the imagination the measure of outrage on the left if any republican campaign was caught on camera doing these clumsy stunts and the TV coverage it would get. Warren gets ZZZZZZ.

I’m vacationing in Rockport this week and I see that the LIBERAL uber rich 1 percenters here are all in for Warren, with houses on the waterfront. The folks across the street with peekaboo views of the ocean have Brown signs.

Just an observation from the front lines here in MA.