Operation Counterweight, the electoral strategy for the rest of us, is intended to help provide a counterweight to conservatives being sold out in two ways.

First, we must elect more conservative Republicans.  Second, we must hold the House majority and take back the Senate by a sufficient majority that we are not beholden to the weakest Republican links as in the past.

There are so many important races that it would be impossible to list all of them, and doing so would be counterproductive in a swarm environment.

With the exception of the Scott Brown and Allen West races, I have tried to select races which may not get national attention and fundraising, which again makes our efforts more significant.

We have selected four Senate races and 10 House races.  Most of them are in the Northeast.  There is a logic to that.  With the red tide sweeping much of the country, the most productive gains are to be made in blue territory.  We want to bring the fight to their territory.

Here is the list, with brief explanations (the link to their names is to their websites, where you can donate).  I will be making donations to each, and I hope you will join me.

Senate: There are many closely contested races around the country which will decide the fate of the Senate, but most if not all of those will receive national attention and fundraising.  I have chosen to focus on two special cases (Brown and Mourdock) and two long-shots in small states where relatively small amounts of additional money and attention really could help make the races competitive.

House:  I have chosen to focus on districts which will be competitive and in which we either can protect an recent incumbent or flip a seat.  The Cook Report ratings of these races (as of August 2) are posted below. 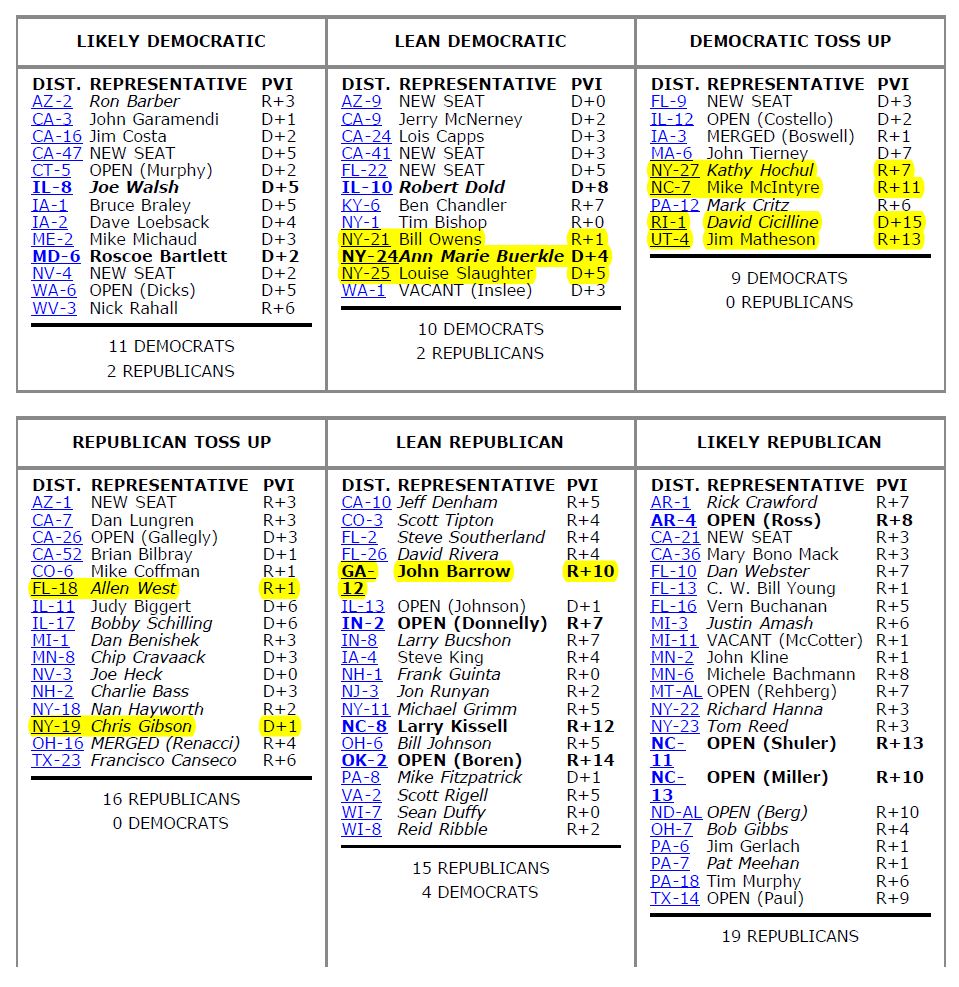 Talk is cheap, campaign donations are not – but they’re a damn sight cheaper than Obama/Dem taxes should they get reelected.

Give till it hurts, folks. Or it will hurt.

1. That’s good news. The unions are trying to appeal.

2. A disaster waiting to happen: the Michigan constitution can be amended via ballot initiative by simple majority vote.

Yes, it will go to the Michigan Supreme Court.

Sad that we in Michigan do not get any focus because this is essentially Union push back from the events in Wisconsin.

Also, Thad McCotter has resigned because of some signature improprieties by his staff .. Michigan’s 11th District has now been declared by Republicans as the most important Congressional election in the nation.

Yet we are left to twist in the wind, ya gotta go with what ya know I suppose.

we need to do everything we can to keep angus king away from snowes seat.

Can someone familiar with the vacant Snowe senate seat shed some light on the upcoming Nov election. As far as I can see from afar, are there (4) viable candidates for the position?

Proud to say I already have all the Senate candidates on my list and several of the House candidates (and have donated).

Will take a look at the rest of your suggestions. I appreciate your explanations on why we should support them – it really helps me make a decision.

Unfortunately don’t have much to send, but I’ll do what I can up until the election.

Cravaack may have caught some luck in MN-08. The winner of yesterday’s hard fought three way Democrat primary race is a retread, 68 year old former three term Congressman Rick Nolan. Like the Congressman Cravaack defeated in 2010, Nolan was a Watergate baby, elected in the Democrat rout of 1974.

Cravaack’s victory was my long shot prediction in 2010 based on changes in the district and the EPA issue. Lots of conservative residents of the Twin Cities suburbs have retired to lake homes in northeast Minnesota or northwest Wisconsin(Sean Duffy)in recent years.

Add the Senate race in Connecticut.

Thanks for the mention of Ricky Gill! Not my district, but the Central Valley farmers are being destroyed by the Democrats kowtowing to environmental groups, and it would be great if they had a congressman who actually understood the hell they’re going through.

Beyond Missouri — Dan Bongino in Maryland gaining endorsements and momentum « Jackie Wellfonder – Raging Against the Rhetoric | August 22, 2012 at 9:51 am

[…] Dan Bongino in the U.S. Senate this November. Last week, he was officially added to the Operation Counterweight final list.  You candonate […]

[…] the Operation Counterweight list has been finalized, a race we are focusing on out of Georgia still has not produced a Republican […]