Still a duck, but at least he’s trying to fight the Prius Presumption.

Here’s how it’s done, but you still can’t change a first impression. 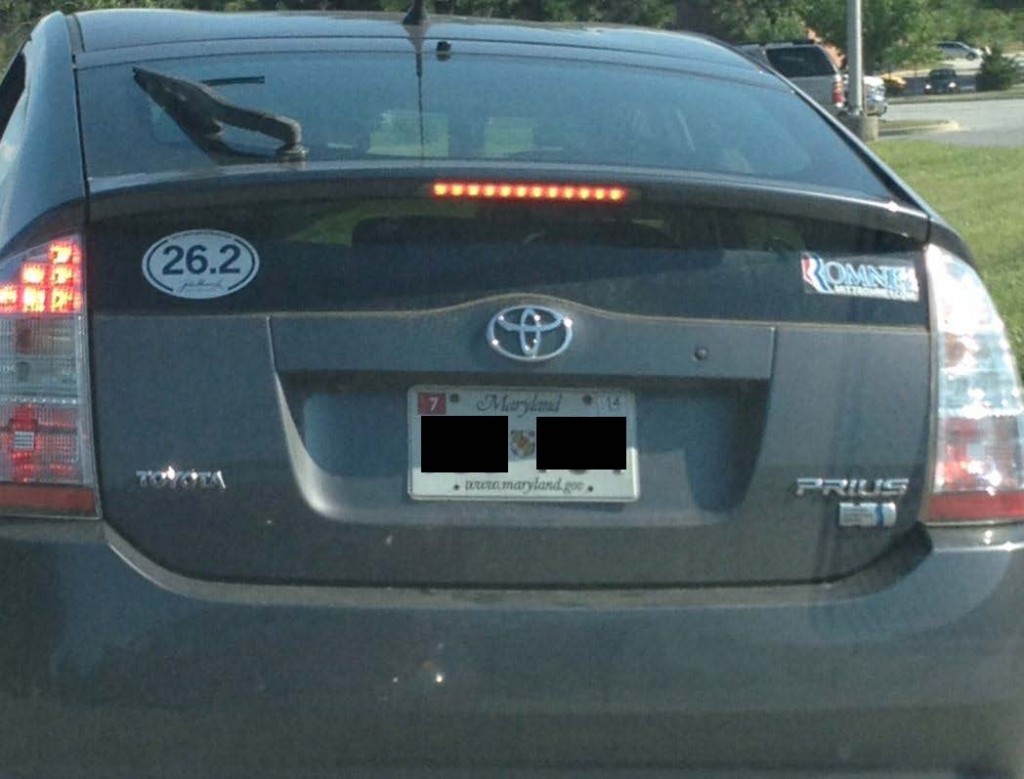 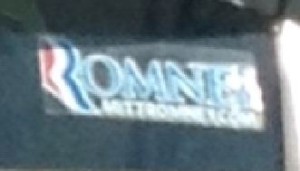 …..”they were all leftist wacos”. What Prius owners or drivers from Maryland?

I’m not a lefty but I’m thinking of getting a Prius. I didn’t know the denigration that comes with it.

I think he/she may get more of a hassle for the 26.2 marathon car sticker; competitive people always want to pass 😉

In California, driving a Prius would let you drive in the carpool lanes even if you were by yourself. Out here, that can knock 20-30 minutes off a 75-90 commute (one-way). Because of that, they weren’t just “statement” cars, they had some practical value. Alas, even the Prius isn’t green enough to get you in the carpool lanes any more. Now you need a Volt “with low emissions package” or an electric-only vehicle to gain that privilege.

” Now you need a Volt…”. I have my limits. If the Prof. et al are going to mock me, maybe I’ll get that VW Golf TDI

privilege?
You are mandated to pay an $8 dollar tax/fee/penalty to receive the sticker.

The Prius plug-in-hybrid and Hydrogen models do qualify.

Of course, the US Federal Gov’t has purchased 25% of every hybrid produced since 2008.. these Gubmn’t induced market distortions are disastrous.

Michigan’s first HOV lane was a 5 mile stretch in Detroit, of course they forgot to define what a HOV was, so the police couldn’t enforce it anyway… not to mention that if your rolling the dice by driving in Detroit you already require someone to ride shotgun .. literally.

priv·i·lege (from http://www.dictionary.com)
noun
1. a right, immunity, or benefit enjoyed only by a person beyond the advantages of most: the privileges of the very rich.
2. a special right, immunity, or exemption granted to persons in authority or office to free them from certain obligations or liabilities: the privilege of a senator to speak in Congress without danger of a libel suit.
3. a grant to an individual, corporation, etc., of a special right or immunity, under certain conditions.
4. the principle or condition of enjoying special rights or immunities.

In this case, the “privilege” is purchased via an $8.00 feel for a multi-year benefit, a benefit not available to others who have not purchased a vehicle deemed fuel efficient by our government overseers.

Hey, I bought a Prius because it was the neatest gadget I can get my hands on in 2005. The carpool lane privilege came later (it has since expired).

Don’t assume politics of a owner of a car based on the car itself.

It may be photoshopped (like I suspected of this one).

As the leader of the Mohawk Valley Patriots here in Utica NY, I drive a Prius and just smile when I see I’m getting over 50 miles a gallon in summer. Of course I also have a gun rack on the back so maybe that makes a difference. I do get a little bummed when Rush and the gang start going on about who drives one of these cars. I’ve been a Rush listener since day one so I hope he realizes he’s insulting some of his most loyal fans. I know that no one here would do such a thing. On this site there is always freedom of choice–right?

Perhaps I should send a photo of my Smart Car with a Reagan Ranch bumper sticker on it before someone else finds photographs it and sends it in. We bought the car because it makes it so much easier to park in the Wash DC area.

On the lighter side, there is a group called the Smartcar Users Group. After getting thier emails for a while I thought that their acronym should be Sm.U.G. What is it they say about wanting to be a member of any club that would have you as a member.

Wow! A Romney sticker. First time I’ve seen one and it’s here. I did see a Prius with a Obama/Biden sticker and Reid for Senate sticker yesterday. Double the disgust, so much disgust I couldn’t bring myself to take a picture. That and I was doing way above the speed limit at the time.

For all the hate thrown at us Ron Paul supporters, here in Front Range Colorado I still see more Paul stickers than I do Romney stickers….Mittens MAY get my vote but I’ll not have his Rockefeller Republican attitude on my car.

I hope more Ron Paul supports will vote for Mitt. We don’t need a split vote and a repeat of 1992.

I saw a Prius with a Ron Paul stick on the right and a coexist sticker on the left. Confused?

That might have been mine except the Coexist was on the right and the Ron Paul on the left…. my wife is the spiritual Coexist in the house and I do the politics; though with some thought, Ron Paul’s candidacy does tie into the coexist concept: work with others, allow for diversity in thought, and defend oneself against violence.

I know, the USA is the most ‘coexistent’ place on earth as we allow for other religions to practice their values and beliefs without interference. Her sticker is more of a statement of her values rather than a leftist demand for accommodation. We definitely provide two votes for liberty–not necessarily Republicans, though. As Dr. Paul has been the only conservative candidate running for president the last two cycles, I’ve been a supporter. His positions and values align far better with conservative thinking people than Romney, Santorum, or the other dwarves.

Sure Mittens will get the nomination and, given his Rockefeller Republican values, will likely go down in defeat. Why vote for a Democrat-lite when you can vote for the ‘real’ thing? That’s why I’ve turned my efforts to local races for conservatives who haven’t been corrupted by the Washington establishment–read Boehner, McCain, Graham, Don Young and Mitch McConnell–and those conservatives running for Senate and House, such as Ted Cruz and Mia Love. If Romney squeaks into office or Obama does buy his way in, we’ll need real conservatives in the Legislature to keep things stable until a real conservative can be elected to the WH.

A very good conservative friend, who often swerves way over into the libertarian lane, recently bought a “Pius” as he likes to call it (borrowing from a South Park episode). He laments that the car pretty much cut up his Man Card, but he bought it for the gas savings and no other reason.

He promised his Pius would not emit smug.

My mom and cousin both drive Priuses and my hubby drives a Highlander Hybrid … all conservative Republicans. I’m not sure I understand why Prius connotates Leftist anyway. It’s a CAR, for pete’s sake, and even Republicans like cool, gadgety cars and saving on gas and stuff like that.

I read an article a few months ago that claims some study says that more Republicans own hybrids than Democrats. Wouldn’t surprise me in the least if it were true.

There is extensive evidence that purchasing a Prius correlates with a 20 point drop in IQ. Scientists are still attempting to determine the direction of causality.

If you’re considering paying the $10,000+ markup for a 40mpg Prius over a 30mpg conventional engine, keep in mind you won’t break even until you’ve purchased 30,000 gallons of gas, or 1,200,000 miles. If that sounds like a good idea, consider sending that money to me instead, or spending that money on having your head examined.

I agree with the above, don’t assume politics based on Prius ownership… neither side has a monopoly on being incredibly bad at math (and from what I’ve seen, incredibly incompetent at driving)

Wait until these hybrids come to end of life and owners learn the EPA will charge a $12,000 fee to dispose of the batteries. Hahahahahahahaha.

As a Prius owner for the last 5 years, all your logic as to why I shouldn’t buy one is moot. I paid a little over $25K for it and don’t regret it for a moment.

I’ll probably not buy a newer one as they appear to be losing mileage rather than gaining additional capability. I’ve put on 116600 miles and am averaging over 48 mpg during that time. My previous commuter vehicle was a Saturn Vue getting 22 mpg, so I’ve basically pocketed 50% of my gas expenses that I was losing during this time. As my income has gone down during this timeframe (thanks Dems, Bernacke, and Obama) I can’t help but be thankful for this one area of brightness.

The Rocky Mountain Gun Owners sticker on the back really gets the reactions when I visit Boulder (CO), so I’ve got that going, as well….

Professor Star Commander lobbed a slow-pitch softball right over the plate with The Prius Presumption.

Allowing conservatives to easily jump on the eco-religion bandwagon for various reasons, including $5 gas prices.

While you may not be a leftist wacko, but it sure doesn’t rectify supporting the ideological underpinnings that support these cracker boxes…
-the CAFE mandates
-the ethanol subsidies
-the bans/regs prohibitive to achieving lower gas prices
-the eco-tax credits

IF conservatism is still rooted in free markets, consumer choice, and limited government, then targeted tax credits are not part of the conservative philosophy. They are subsidies that misallocate resources and create the crony capitalistic behavior that Americans loathe.

Come on….at some point in life one must separate the political from the economical on the personal side. Sure, I’m not going to buy a Government Motors vehicle during this lifetime (even if it’s the only car company left on the planet), but I still look at a vehicle as to my transportation needs, not necessarily the tax or policy implications of my purchase.

Sure, “…targeted tax credits are not part of the conservative philosophy. They are subsidies that misallocate resources and create the crony capitalistic behavior that Americans loathe.” I agree 100%. Does that also mean I take no deductions when filing my return because I don’t believe that tax credits for kids is conservative thinking? NO, if government giveth, I’m going to taketh! Do I intentionally seek out every gift Uncle Sugar dispenses? No, but if I’ve made an economical decision and the Feds are subsidizing it with money I’ve already sent their way, I’m going to take it.