Prius, How Could You?

Prius, How Could You?

Supporting the Navy is one thing, but a climate change denier?  And you call yourself a Prius. 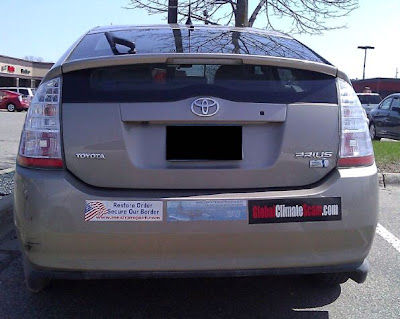 "A year and a half ago, I gave a talk at Stanford University at a conferenced aimed at donors sponsored by the Hoover Institution, and there, before my talk, I had the privilege of listening to John B. Taylor – who mentioned in passing that he had briefed Sarah Palin when she was the Republican vice-presidential nominee and that he had found her a quick study. My bet is that she has a kitchen cabinet of sorts and that John Taylor is a member. If so, quietly in the background while no one was paying attention, Governor Palin has been filling in the considerable gaps in her education. I suspect that we have not heard the last of the lady." Paul A. Rahe

Paul A. Rahe holds The Charles O. Lee and Louise K. Lee Chair in the Western Heritage at Hillsdale College, where he is Professor of History. He is author of Republics Ancient and Modern: Classical Republicanism and the American Revolution (1992) and of Against Throne and Altar: Machiavelli and Political Theory under the English Republic (2008), co-editor of Montesquieu’s Science of Politics: Essays on the Spirit of Laws (2001), and editor of Machiavelli’s Liberal Republican Legacy (2006). In 2009, Professor Rahe published two books: Montesquieu and the Logic of Liberty, which has as its subtitle War, Religion, Commerce, Climate, Terrain, Technology, Uneasiness of Mind, the Spirit of Political Vigilance, and the Foundations of the Modern Republic, and Soft Despotism, Democracy’s Drift: Montesquieu, Rousseau, Tocqueville, and the Modern Prospect.

I love the GlobalClimateScam sticker on a Prius. People think that if you don't believe in global warming you are anti-environment or pro-pollution. It is absolutely unheard of that someone could believe in preserving the environment without buying into all the 'Green Propaganda.'

Hey, I drove a Prius, and don't subscribe to the scam as well. I just don't have the habit of putting my political view on my bumpers.

This poor soul is going for the gadget

Prius is an excellent car. It is sadly overpriced in its class, but if you value convenience and practicality, then why the heck not. People buy overpriced cars all the time, in all categories.