Alethea Harney, Elizabeth Warren’s press secretary, is the one feeding my name to Boston media as a “right wing extremist.”

Yet Harney apparently is not proud of her personal Twitter history.  As reported by The Washington Free Beacon, Harney has turned her Twitter history private, trying to avoid scrutiny:

Harney’s personal Twitter account, @BostonAlethea, is now protected, and her tweets are only available to confirmed followers.

Before it was locked, Harney’s personal Twitter page included frequent references to “Blasians” (“Black Asians”), racially charged taunts directed toward Mitt Romney (whom she referred to as “Romneezy”), shout-outs to her “Saudi sisters” and her “multiracial peeps,” and observations about people who “look like they could be Indian.”

Harney has also mocked white Iowa farmers in interviews, saying, “A lot of them have never seen anyone like me.”

On her Twitter profile, the Warren spokeswoman refers to herself as “The official voice of Blasians in Boston.”

On July 5, 2011, Harney replied to a friend’s Tweet announcing that “4 percent” of the guests at a wedding were Indian. Harney wrote, “does that tally include people who look like they could be Indian?” followed by a winking-face symbol….

Harney also repeatedly referred to Republican presidential candidate Mitt Romney as “Romneezy” or “Rneezy” in response to a Politico analysis on his appeal to African-American voters. 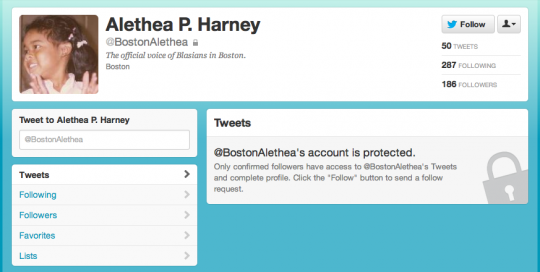 The tweets mentioned in The Beacon article sound more stupid than nasty, but the question is, why is Harney hiding the history?

And what else is out there that she has tweeted that she doesn’t want known because it might be an embarrassment to her boss?

You’d think that someone serving in the role of ‘Press Secretary’ would be pretty careful about how how they use social media. Then again common sense doesn’t seem very common in the Warren camp.

Not when you think that the echo chamber you live in is the whole world (with the exception of flyover country, where the haters live).

This is just like Lie-awatha’s car — from BMW to Ford Motor. How convenient – a lie.

I think the appropriate term for someone who kakes those kinds of remarks is “hipster racist.”

Sounds like another case of those who congratulate themselves for being so smart behaving so stupidly.

What is Ms. Harney hiding…?

She is a racist. Duh.

She’s your typical, garden variety liberal racist who would have you believe that butter wouldn’t melt in her mouth.

“The official voice of Blasians in Boston.”

I wonder if all the other Blasians know…? Approve? Agree?

Who calculates the ethnic make up of wedding guests?

I live in a diverse gate way city in Massachusetts, so ethnicity isn’t a big deal. It is just who you are and what your grandmother cooks.

This woman is so obsessed with her ethnic identity as a political statement, that she can’t enjoy any of the cultural elements that come with having a heritage.

The tweeted comments/messages are of Alinskyite design, intended as ridicule and to any liberal and especially minorities as a warning to stay on the liberal plantation or face the same racist and discriminatory derision.

lastly, Prof you’re probably right about “the one feeding my name” but as of yet I don’t see the direct proof…
For that matter, Pippa’s derriere could be also construed as right-wing asstremist?

The Herald identified her as the one, “Harney referred to Cornell University Law Professor William Jacobson” http://news.bostonherald.com/news/politics/view/20220620warren_camp_says_activists_tied_to_senator/

Ooh Professor , you are a stinker! Any kin to Buggs Bunny?

Sounds like the Harney got a bad case of the Blarney.

Michelle Obama was in Pueblo yesterday. lt was a tightly controlled event open only to the chosen few. Like a certain twitter account. The dems havent been able to appear in open public since the townhall debacles of a few years back. lts really to bad. They shielded Michelle from the 80 or so of us that showed up to say hello. ln Denver the GOP only got 20 or so to show up to her appearance there. Denver is the reason Colo. may well stay blue. Denver blows monkey turds.

I wonder how many times Harney has been to Iowa, since she seems to believe that there are a lot of Iowans who have never seen a person of mixed race. Does Harney think Iowans live in a time warp, or is she just another race-obsessed liberal fool who believes that every white person who lives in flyover country is some sort of toothless, ignorant, xenophobic bigot?

1. Demonstrates, yet again, that the left at base are the racists and the totalitarians.

2. Leftists’ belief that they are the smartest is just that – a belief unjustifiably held. The Breitbart / Tea Party movements represent the end of our patience with leftists. Enough is enough. And what we have found is that our arguments have always been the better ones. Explaining why the left is now in conniptions. Obama, Granny Warren and those surrounding them are Exh. 1.

You’ll find the so-called liberal/progressive arguments like the ones from Thinkprogress are many times sourced to other liberal progressive sites with opinion and/or commentary.

Apparently, the bar is so low for liberal facts that two liberals with feely’s equals a consensus or truth.

The corollary of “strength in diversity” seems to have devolved into “majority white (conservative) communities are backwards and hateful”.

If one is not confident in making it on talent, joining the fraternity/sorority of the left gives one a free ticket to ride on the “diversity express train”. The left will reward their own, and punish their political enemies at every step. Step right this way … roll up to the magical diversity tour. Their egos soar and they blind themselves to their own racism.

“The left’s vision is not only a vision of the world, but also a vision of themselves, as superior beings pursuing superior ends.
….
The self-flattery of the vision of the left also gives its true believers a huge ego stake in that vision …”
Thomas Sowell
http://www.creators.com/opinion/thomas-sowell/socialist-or-fascist.html

Racism is held by the left, as a superior understanding (as long as it is against conservatives). They are baptized into a religion that exalts their station in life to a family of enlightened ones. Ridiculing any “diversity” that is outside their “liberal” religion is praised. Exposed to a national audience, the smug racist maneuverings are hard to explain, to the unwashed masses.

This Blasian’s mind set fits Fauxchahontis to a tee. Life is not at all about the content of your character; it’s the color of your skin and your racial ancestry which defines you. Look at the sick sense of pride she has: these white Iowans have never seen anything like me!!

What’s ironic as pointed out in the post is that deep down they know it’s all BS! That’s why they hide it.

Aesop, Fables 530:
“Prometheus, that potter who gave shape to our new generation, decided one day to sculpt the form of Veritas [Aletheia, Truth], using all his skill so that she would be able to regulate people’s behaviour. As he was working, an unexpected summons from mighty Jupiter [Zeus] called him away. Prometheus left cunning Dolus (Trickery) in charge of his workshop, Dolus had recently become one of the god’s apprentices. Fired by ambition, Dolus (Trickery) used the time at his disposal to fashion with his sly fingers a figure of the same size and appearance as Veritas [Aletheia, Truth] with identical features. When he had almost completed the piece, which was truly remarkable, he ran out of clay to use for her feet. The master returned, so Dolus (Trickery) quickly sat down in his seat, quaking with fear. Prometheus was amazed at the similarity of the two statues and wanted it to seem as if all the credit were due to his own skill. Therefore, he put both statues in the kiln and when they had been thoroughly baked, he infused them both with life: sacred Veritas (Truth) walked with measured steps, while her unfinished twin stood stuck in her tracks. That forgery, that product of subterfuge, thus acquired the name of Mendacium [Pseudologos, Falsehood], and I readily agree with people who say that she has no feet: every once in a while something that is false can start off successfully, but with time Veritas (Truth) is sure to prevail.”

That parable, like the rest of classical Greek culture, was stolen from Blasia. I know because I am 1/32 Blasian.

What is she hiding? That she is an idiot!

Usually I let people speak as they wish on their own personal twitter/facebook.

But… she’s a press secretary!

This is the misery I have with the Democratic Party, the condescending attitude that if I dare question anything I’m well a stupid ignorant bigot.

I know life long Democrats, in which are nothing like this. They vote faithfully, never questioning anything within the party. I’m not even asking them to vote Republican, I asking for them to take back the party from this crap.

I didn’t leave the Democratic party, they left me.

She just hates it when somebody lifts the plywood and the chickens eat her and all her [email protected] friends.

Hey… it’s Lizzy Warren’s birthday.
Go here to sign a birthday card for her!
Shouldn’t we all help her celebrate ???
http://elizabethwarren.com/birthday-card

Elizabeth Warren has been one of the greatest and most passionate abusers of minority privilege in recent years.

She’s been working hard out on the campaign trail, traveling all across Massachusetts trying to avoid the Cherokees that she abused, so I took a moment to do something special to thank her for her uncaring.

Hopefully next year we’ll celebrate the birthday of #OccupyElizabethWarren at the Massachusetts state unemployment offices!

How do I personalize my signature for her card? I’d like to wish her a birthday greeting in her original Cherokee tongue (which is in her case, I suspect, forked). Alas, I think it’s just a way to gather emails for future fund-raising pleas.

Now don’t be a piker…

Looks to me that the DNC is fiscal panic mode: firewalling Preezy takes precedence over everything else including #CheekBones Lizzy’s campaign and Wisconsin low budget failed recalled.

tisk tisk tisk what is to become of the liberal march for justice?

The melting pot sure is self-conscious. Narcissistic, even.

Sorry, Blasian. You’re no more human than anyone else.

You’ve got 23 pairs of chromosomes, just like the rest of us.

Well, except for Professor Jacobson. He’s got an extra copy of chromosome 6, where the right-wing extremist gene, according to family lore, is said to be located.

LukeHandCool (who, as a stickler for decorum, won’t bring up the murky lore about the Professor’s rumored XX male syndrome disorder).

Hie thee to a genetics refresher….STAT…!!!

You know, when you take a closer look, the Professor has high cheek bones. Hmmmm.

Now I’m curious to see if she was involved in the Pigford settlement in any way?

I wonder if this Blasian will surprise Liawatha with either of her Pow Wow Chow favorites for her birthday – “Cold Omelets with Crab Meat” or “Crab with Tomato Mayonnaise Dressing” – or if she will surprise her with a Blasian dish. Funny, I checked my local yellow pages for a great Blasian restaurant …. can’t find any.

I am not not sure I am getting this but This is the first time I have seen this word.

Tiger Woods is Blasian & I bet every Iowan famer has seen him.

What am I not understanding. ?