Yesterday was an amazing day, and not just because Scott Brown won (although that helped).

Yesterday was the first “live” blogging event here. 21,432 people participated in the live event, generating 5,402 reader comments. There were almost 70,000 visits to the site, which used to be a pretty good month.

The energy was tremendous. Here is the final screen shot: 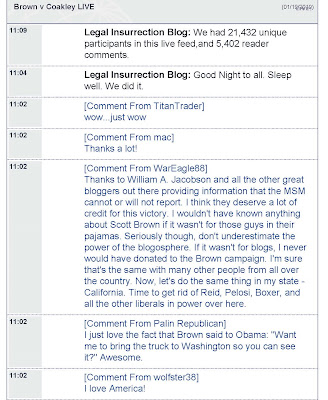 When we signed off just after 11 p.m., we still had almost 900 people on the feed. Here are some of the reactions to Brown’s win earlier in the night: 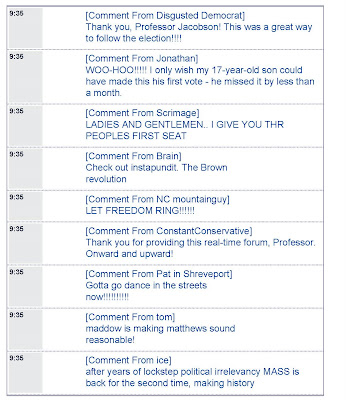 Thanks to the dozens of bloggers who linked, particularly Instapundit, for helping to generate interest in the live feed, and to those people who kindly let me incorporate their Twitter feeds into the live feed.

Looks like I'll have to follow you on Facebook. I visit often and enjoy what I read and learn.Also very glad Brown won. We need our country back.

I consider myself smarter than the average bear, however, I'm confused by the numbers here?:

Should it be the other way around, or were there several participants leaving 1/4 of a comment? 🙂

Congratulations, Professor, on a job well done. Few people anywhere, much less in the blogosphere, did as much as you did to boost Brown and make his victory happen.

Dr. Jacobson, a few days ago, I posted a comment with respect to comments made on Fox News by Congresswoman Debbie Wasserman Schultz wherein she repeated the lie about Scott Brown wanting hospitals to deny care to rape victims. At the time, I could not locate the clip, but alas, I found it today.

The money shot is around the 4 minute mark, however, the complete interview is an interesting watch, especially given last night's results. The clip makes clear that the DNC was, at the very least, linked to this fabrication, if not, indeed, behind it.

Trochilus said…
syd B. No, I think what happened was that the meter counted a few things.

I could be wrong, but I sense that the largest number — 21,432 — was the number of "computers" that showed up for the live feed event (the number of visitors to the site over the course of the live feed). I don't know if there were "double" counts for anyone who may have left and then come back.

The second number I think, is the total number of statements made by commenters, which number would obviously be significantly higher than the actual number who commented. That is because many of us posted many more than one comment over the course of the evening. So, in general, there is no meaningful correlation between just those two numbers above.

For example, you would have to know how many commenters there were (as opposed to comments) in order to figure out the percentage of those who posted, as opposed to those who just stopped by to read.

The other unknown is how many trolls and troll comments were "moderated out" of the discussion.

I have no doubt at all that there were a few juvenile spam bot actors who tried to post obscene comments or links, or tried to post extremely lengthy posts in order to attempt to crash the feed.

Moderation had a secondary useful purpose, I am sure, in the sense that it allowed the Professor to answer a few comments "on the spot." He inserted several short responses within the course of the evening.

William A. Jacobson said…
@Trochilus, I think you meant your comment for a different post, "What a day". As to the specifics, the feed was live most of the day, and only people who turned on the feed would be counted; which makes sense because the number on the feed for the day was less than one-third of the total visits. Also, the reader comments were those that made it past my troll filter.

Congratulations. Your coverage of this election was infectious and the number of visitors confirms that.

You really led the charge on this election motivating many others to take up the cause as well. I am sure you must have taken some sense of accomplishment seeing Brown up there giving his victory speech last night. You certainly did everything in your power to help that happen. This was all very inspiring and really, truth be told, a heck of a lot of fun.

That is just flat out awesome William. I tip my hit to your hard work and efforts. Bravo!

Victory in the first pitched battle of this "Holy War" to save the Shining City Upon a Hill. How sweet it is!

I've written about how our Army of Davids helped the best man win in that Pajamas Media article I alluded to yesterday on Twitter:

"Social Networking Key to Brown's Success:
The inside story of how tea party twitterers, Facebook friends and Blogspot buddies helped win the race for Scott Brown."