Christie on the Golan

Christie on the Golan

Chris Christie is visiting Israel, and got a chance to look out at Syria from the Golan Heights. 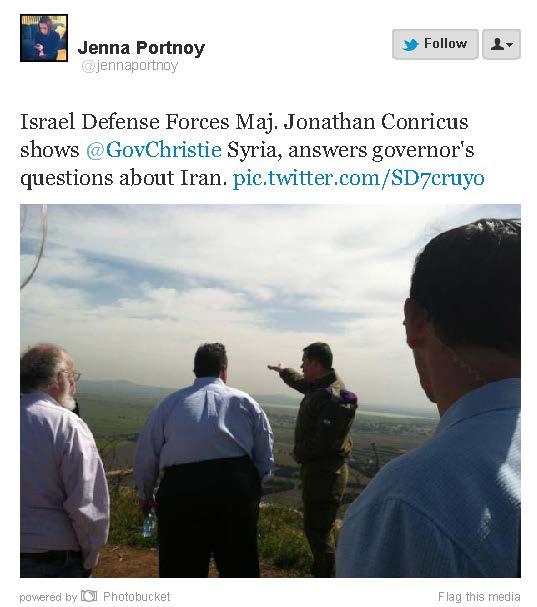 The L.A. Times Should Release the Khalidi Tape for Passover.

What a wonderful idea…!!!

Nothing substitutes in recognizing the precariousness of Israel’s position than seeing for oneself.

I think he’s on Har Bental, a small mountain with an amazing view of the Golan, Mt. Hermon and into Syria. The valley below to the Northwest was the site of pitched battles between Syrian and Israeli tank forces. I know there are some that worry about Christie and some Muslim Judge he put into place in NJ….but I’m glad to see him on the Golan and I hope that he comes away with a real understanding of what Israel has to contend with, and especially if he might end up as Veep candidate or in some role in a Republican admin. For more pics of him, google up Christie on Har Bental, and the gov’s office has a page full of good pics.

The judge Christie appointed is not just ‘some Muslim Judge’

“Now Christie has nominated Sohail Mohammed, Qatanan’s former lawyer, to a Superior Court judgeship. Sohail Mohammed is a board member of the American Muslim Union, an organization that has interlocking leadership with groups that have fundraised for Hamas and hosted a Hamas speaker. The American Muslim Union is closely interlinked with Qatanani’s Islamic Center of Passaic County……

Sohail Mohammed defended suspected terrorist detainees and was the go-to man for local and national media looking for a good quote. He lobbied against the use of both ‘Islamic’ in descriptions of Islamic terrorists, condemned the television show 24 for depicting Muslim terrorists and made an appearance outside the Qatanani trial. After the massacre of a Coptic Christian family, Sohail Mohammed tried to have some Copts investigated for opposing Muslim attendance at their funeral. And most importantly, Sohail Mohammed was Qatanani’s original lawyer when the government began its case against him.”

“But it was a follow-up question on the fear of Sharia Law that set the governor off. “Sharia Law has nothing to do with this at all, it’s crazy!” he cried. “The guy is an American citizen!” He concluded that the “Sharia Law business is just crap… and I’m tried of dealing with the crazies,” adding with disgust and frustration that “it’s just unnecessary to be accusing this guy of things just because of his religious background.”

Like most all corrupt and creepy politicians, it appears the Obese Bully Bamboozler is simply playing both sides of the fence. Christie is in Israel for a fake photoshop; he does not care about Israel, he cares about power.

Now this is interesting, the post with direct quotes made by Chris Christie about Sharia Law and his defense of appointing a radical Islamic Judge to the NJ court has two thumbs down yet the post which provides a legitimate, real-life example of what Chris Christie is defending receives three thumbs up.

There is a disconnect between the perception and reality.

Christie is a spiritually blind liberal.

If Christie is so great then perhaps he might want to visit Luton, England just to find out what he defends:

This is the sort of thing politicians in the 2nd and 3rd ranks do when they’re planning, long-term, to move up to the 1st rank.

I’m not disparaging Christie; he’s not yet a 1st tier politician. But he’s going to be, and he’s currently doing his homework. Trips like these not only educate him, they also build up credibility and open doors.

Regardless of election year, is duplicity a good plan?

I disparage duplicious politicians therefore I have no problem disparaging Chris Christie.

How can a politician build up credibility when that politician dwells in falsehood?

Actions and inactions speak louder than words…just a coincidence this took place when the Muslim Brotherhood was meeting with Barack Obama?

Good thing Christie was not down in Eilat. He is such a big target that they just might have hit him (sorry, that was mean).

“Chris Christie is visiting Israel, and got a chance to look out at Syria from the Golan Heights.” …and those behind Christie got to see Christie.
Diet, now, b**ch.

I wonder if Prime Minister and Mrs. Netanyahu have invited Gov. Christie for dinner.

To answer my own question: he did, but no video or photos of it readily available. Closest is the video Gov. Christie posted of him introducing his family to PM Netanyahu and a more formal meeting including Christie and his wife.