I asked for a good coffee mandate, and reader Liz delivered, with this photo and an e-mail with the suject line “The need for coffee”:

And I think we need lots of it!

The picture was taken on 3/8/2012 on I-94 westbound from Detroit. I think I was west of Ann Arbor by that time. Sorry, I did take the picture while driving, but I was very careful.

BTW, I went to both University of Michigan as well as Cornell Business and I still turned out conservative.

The real miracle is not the coffee, but finding a conservative U. Michigan and Cornell grad. 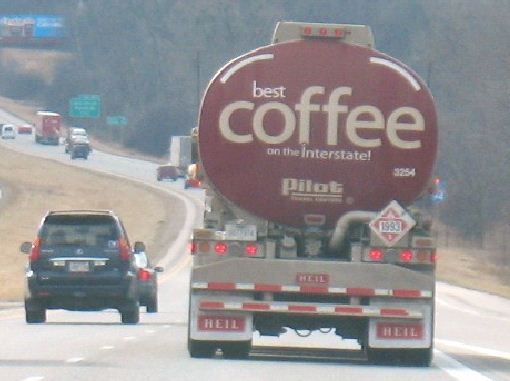 I’d like to issue a warning flag to your good coffee mandate to be careful what you wish for, as Milton Friedman once said…
“If you put the federal government in charge of the Sahara Desert, in 5 years there’d be a shortage of sand.”

At best you could probably expect massive increase in taxes, to fund a plentiful supply of chicory and the rest of the funds would go to a media campaign to convince the public that
a) coffee is a health risk
b) its destroying the environment
http://www.conservation.org/campaigns/starbucks/Pages/hotspots_and_coffee.aspx
c) drinking coffee is vital to national security of USA
d) the chicory you drink IS good coffee

-there must always be division and conflict to politicize every issue and mobilize human capitol.
Coffee gets you going.

Or, with the government in charge of coffee, we would only be allowed coffee from those countries that are fair trade, unionized, grow their coffee in the shade, have companies managed by a diverse and gender balanced team, and their workers would have a long, loving relationship with their donkeys and the freedom to marry them as a civil right.

This fuel tanker truck is one of a Pilot Travel Centers fleet owned by the Haslam family – one of which is Tennessee Governor Bill Haslam. When Bill was the mayor of Knoxville, TN, he joined Nanny Bloomberg’s “Mayor’s Against Illegal Guns”, but dropped out of that group shortly before announcing his candidacy for governor. Don’t miss the fun at this link –
http://pjmedia.com/instapundit/?s=mayors+against+illegal+guns

“When Jim Haslam returned to Knoxville, Tenn. in 1955 from serving in the Korean War, he had to decide on a career…

… Today his Pilot Flying J is the biggest operator of travel centers in North America and the 11th largest private company in the U.S. Last year the network pulled in $17.7 billion in sales from a network of more than 450 travel centers selling over 7 billion gallons of fuel per year (including 20% of all diesel consumed on the road). Pilot is also among the top 10 restaurant franchisees in the country, with 287 units. And it’s still very much a family business: At 80, James is chairman; oldest son Jimmy, 57, is CEO; granddaughter, Whitney, 33, is creative services manager; another two sons-in-law also work for the company. The Haslams are among the wealthiest and most powerful clans in Tennessee whose 59% stake in Pilot is worth at least $3 billion. Bill, 53, James’ youngest son, worked for Pilot for a decade, and then switched to politics. After two terms as Knoxville mayor, he’s now the governor of Tennessee.

The entire article is at this link.

The first time I saw one of these trucks I followed it until I could see the “1203” placard; I was truly disappointed to see that it carried fuel and not coffee….

I was wondering what the 1993 on this truck was for, because you know, the EPA regulates the cleanup of coffee spills about as tightly as they regulate the cleanup of spilt milk.

Well, I went to the University of Michigan, albeit only for law school. When asked my political orientation I still say, “Neoconservative in the actual, Kristolian sense of the word.” But I’m willing to concede that neoconservatism is not separate from conservatism anymore, but a subset of it.

I was inoculated against the worst of leftism because in part by the time I got out of high school I had figured out that the Viet Cong were not an Asian version of the ACLU. However, even at a tender age, three years of watching U of M cured me of ever being much of a leftist. The arrogance and the power worship was evident even back then.

Heh…I was about to say that we’re not that rare (Cornell ’84), but then I realized that all of my friends that I still keep in contact with (save one) are extremely liberal…

You see them pretty often out here in the middle of nowhere Texas!

I never thought I would see you finding common ground(s) with that entity whose name has been banned.

1993 on the Hazmat placard means he’s carrying diesel fuel. Coffee is not on the list of hazardous materials, yet. Pilot is a nationwide truckstop chain. Most company drivers don’t care much where they buy their fuel, #2 diesel is #2 diesel. So the truckstops… oops, sorry, the “Travel Plazas” compete to offer the best driver amenities to get a driver’s attention. Pilot offers small facilities and usually only fast food restaurants, if that. So they’ve made coffee their selling point. Usually tastes better than the diesel fuel, which is an achievement in this business.