Charles M. Blow is the mob

Charles M. Blow is the mob 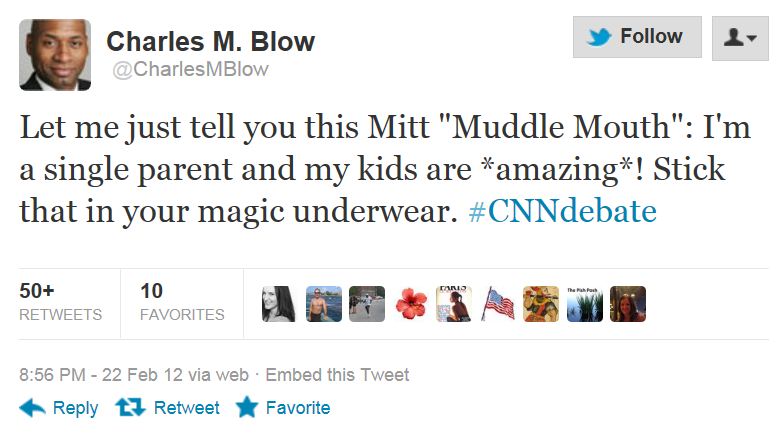 But then again, he’s a NY Times columnist with a long history of foul hyperbole directed at the Tea Party movement and conservatives:

Welcome to the mob: an angry, wounded electorate, riled by recession, careening across the political spectrum, still craving change, nursing a bloodlust….

The most recent manifestation of the shifting landscape is the election of Scott Brown, a Republican in reliably Democratic Massachusetts, which shattered the Democrats’ filibuster-proof Senate majority and their sense of security….

Here’s a photo of one of those mobs to which Blow was referring: 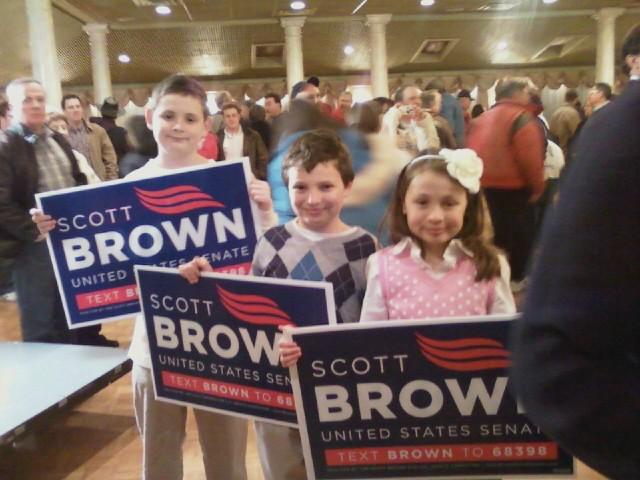 Blow is the real angry mob. 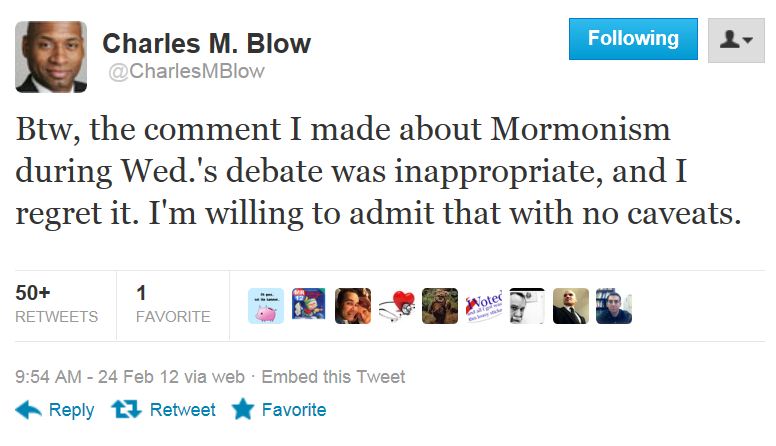 Mitt Romney made a very valid point. Is Blow suggesting everything is fine with single parenthood? What a tool. Yes of course there are many single parents doing an amazing job. But kids do far better overall with two parents. It is not even debatable statistically.

yes, if Blow had said “stick that in your tzitzis”, he’d have been fired that instant. no trial. no suspension. no apology. he’d be gone.

will be interesting to see what happens with this. I suspect he won’t be fired. He’ll probably apoloigze and that’ll be the end of it.

Or, maybe it’s part of a plan. Maybe he did it so people will go after him and then he has opening to talk about the history of the LDS church and its views towards blacks. About the fact that Romney was a member in good standing of a church that officially discriminated against blacks into 1978, 14 years after the civil rights act, 24 years after Brown vs Board. I don’t think Romney will come out of that the winner the more people learn about the history of his church and their treatment of blacks. he probably doesn’t want to talk about it.

Are you comparing “tallit katan” to temple underwear? The two do not serve anything like the same purpose. I wish folks would actually read something about Mormonism and Christianity before commenting on it. Mark Levin does this frequently and it is obvious he has not studied either religion in any detail…

I’m not saying they serve the same theological purpose. I’m suggesting that if Blow had made a similar quip about clothing related to Judaism he’d have been fired immediately. Tzitzis was the first thing that came to mind when I tried to think of clothing or garment that jews might wear under their clothes.

But if you want to explain in detail what the religious significance of the undergarments is in LDS theology and how it differs from tzitzis, by all means, enlighten us

So you don’t know and you didn’t bother to even google it. Kind of made my point.

First of all, let me say I have never heard so much fuss about Mormon underwear in my life. I would think Mr. Blow and others would have more important things to worry about.
As a former Church of Jesus Christ of Latter Day Saints member and a lady, I would not then nor do I now choose to discuss what I wear under my clothes. I will say this about the LDS garments. They are symbolic of sacred covenants made with God. If that answer doesn’t work, I am sure that anyone can go on any LDS hate site and find whatever answer suits their agenda.
While I am ranting, I have to address a comment here a week or so back. Someone was going on about the secret rites LDS members go through when they go to the temple. The member participates in sacred rites where he or she makes covenants again with God and his Son, Jesus Christ. There are no sacrifices, no bloodletting, and certainly no swearing of oaths to bring down the United States to establish an LDS kingdom. Going to the temple is a personal and very sacred thing..these rites are not discussed by the members because of the sacred and personal nature of said rites, not unlike a priest who will not discuss what you told him at confession.
Lastly, I will not discuss why I left the Church in a public forum, and yes, I support Newt.

This is the second or third posting on different blogs I’ve seen by LDS members who try to claim that the LDS temple ceremonies are “sacred not secret”. If I didn’t know better, I might assume that this is being taught as the latest talking points in LDS pulpits across the country. If they aren’t secret, then tell them to us.

Obviously, they are secret and considered sacred by the participants. Why is it so hard for some Mormons to admit that? Is it a big deal? In my opinion it is not a big deal, so why the word games? Full disclosure: I’m not LDS but my wife is a former LDS.

Just a hunch, but I’ll bet Mister Blow’s kids are counting the days until they’re 18 and can legally change their last name.

Ever meet a parent who didn’t claim their kids were “amazing”?

Charles Blow is a bully. Like all bullies he is also a coward. He can say things about people he knows will not turn to violence for the slightest offense. He would avoid, at all costs, offending Islamists. Instead he feels free to insult Christians and others who will be offended, but not take violent action no matter the provocation.

Blow is a coward and bully.

Agree with you that Blow is both a bully and a coward. However, the liberal MSM is able to get away with such below-the-belt comments, whereas a conservative would be tarred and feathered for far less.

It’s unbelievable that such a double standard is allowed to continue!

If Massachusetts was reliably democratic, how did a republican win? I’m guessing more than a few dels and Indys went the other way. How did blow miss that?

Six out of the last 10 governors of Massachusetts were Republican. Blow is an idiot.

I’m no Romney fan myself. I think the guy is a creep, but seeing Charlie Blow(me) get so heated up makes me think I have been missing something. I would guess his kids are ok, but we know one thing for sure, his kids will be religious bigots.

The question is this: is single-parent a) equal to, b) better than, or c) less than, two-parent families.

Now, I don’t see any groups touting B as better, but I do see a lot of groups that wnt to do everything they can to say A is true, when everything we look at says C.

Of course, for the liberal, as long as the two are equal, everything is fine. If it is not true, then out the window goes a whole list of social positions they favor. Pre-Marital sex, quick-n-easy welfare mommas, young punks who think having 5 babies with 3 different women is something to be proud of, as well as other positions such as “marriage is sacred” and avoiding working on a marriage as long as divorce is easy.

As an overpaid, pampered, stay-at-home columnist, Mr. Blow does NOT get to compare himself to minimum-wage single moms working at Wal-Mart and IHOP and say “everything is alright”.

(then again Blow could be right…that girl in the front, she’s really a circus midget, using the sign to conceal her AK-47 with triple banana clips)

I’m not on Twitter alot, so maybe he’s on there all the time – but from what I saw earlier tonight, he’s Tweeting every couple of seconds and that’s the least of the insults he hurled – he’s a foul-mouthed aggressor from what i could see.

Maybe he’s drunk tonight – or on something stronger. Flying like a kite.

He hates anyone on the right, it’s quite clear. Funny how the Id acts in ‘anonymous’ formats.

The left viserally does ‘hate’ the right. It’s both strange and sad.

He is right that kids of single parents aren’t all bad – in fact most of the adults I know who grew up in a single parent home are amazing – and are successful, really successful. They also have a heightened sense of responsibility.

Ace of Spades did a complete rectal rearrangement on Mr. Blow tonight on twitter.

That’s racist! Well, maybe not; but, it is certainly anecdotal, with an overt expression of prejudice.

Does “dislike” think I am criticizing Professor Jacobson or Blow?

There are plenty of “single parent homes” that aren’t intentional, e.g. widows of war veterans. We are better than to use a label that lumps these families in with deliberate and irresponsible non-marital childbearing.

Blow should not have gotten his undergarments twisted in a knot.

What is it with libs with names like Weiner and Blow obsessing about sex?

It really doesn’t matter but idle curiosity makes me wonder why Blow is a single parent. Sexist or not it is still unusual for a father to get custody vice the mother. Did he have a wife who died, did he adopt his children?