Posted by William A. Jacobson Saturday, February 4, 2012 at 09:38am 6 Comments
More Sharing Options

Last June I addressed this photo then circulating on Facebook purporting to show an Israeli soldier stepping on a Palestinian girl: 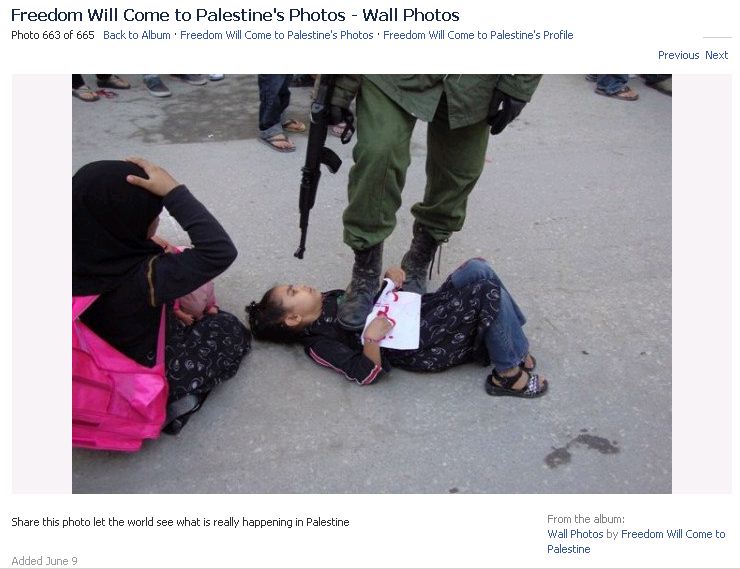 Via information provided by Israel Matzav, I pointed out that the soldier was not Israeli, as evidenced by the boots, clothing and weapon.

I couldn’t understand why, in the past few days, I began getting traffic linking to that old post.  Now I know why.

The same photo is circulating again and being used to incite people against Israel.  And as before the photo still does not depict an Israeli soldier.  Via the IDF Blog and Elder of Ziyon, we now know that the photo is from an anti-Israel demonstration in 2009

Prior LI posts on Pallywood:

The “anti-Zionists” like to point way back to Rachel Corrie that died trying to block a bulldozer. They are content with ignoring all the rockets and suicide bombers that target innocent Israeli citizens, and are deaf to Iran’s intentions of destroying Israel.

Palestinians could have their land, but they can’t take “destruction of Israel” off the table. Infamous Helen Thomas thinks they should “go back to Germany, or wherever they came from”, but history shows they came from Israel, though it had a different name.

Obama gives up drone technology rather than upset Iran (by going in to blow it up), while ignoring that Iran is behind IEDs that are killing Americans in Iraq, and supports Hamas that is fighting Israel. Campaigner Obama will poll to see what crisis to use or create for his reelection.

The cultural forces of the Bible and Western civilization is strong with Israel and the conservative portion of the US. I don’t know how strong the “Zionist” forces are in banking or industry, from where the Zionist haters claim they run the world. But it sure seems odd that American Jews vote for liberal Democrats, who are actively marginalizing Israel.

Silly fake pictures like this just seem to be stirring the pot. Panetta announces Israel’s plan to bomb Iran? Something is brewing … I don’t know what. But Obama needs another crisis.

If you substitute players, you get the same story. OWS equals “Palestinians,” Police equals Israelis. The propaganda is the same.

“Fake but accurate” has never been so phony. Is that a director’s chair I see in the corner?

Meanwhile the Palestinians are busy teaching their kids that the Jews killed Micky Mouse.

She and her friends are kinda relaxed, eh. If someone steps on you, you don’t just lie there, you curl everything. But, that’s Pallywood for your money. Then the Juice turn around and provide life-saving medical care to the progeny of the killers. Where are you gonna find people who will do that in the Arab world? I’m tired of doing confession and absolution for what I think, say, and write about these people, but how can you get to a mo charitable place when you’re dealing with such barbarians? I don’t know how the Jews do it, maybe I should talk to a rabbi…. Er, on second thoughts, let me keep my turmoil cuz some of these rabbis today might lead me down the road to becoming a Pally-symp.