Why California Wasn’t Prepared for Floods from Massive Storms

Why California Wasn’t Prepared for Floods from Massive Storms

BLAME CLIMATE CHANGE NARRATIVE: Funds were not made available for flood prevention (despite the state’s climate cycles), and “experts” want to use a more “natural” approach for flood control. 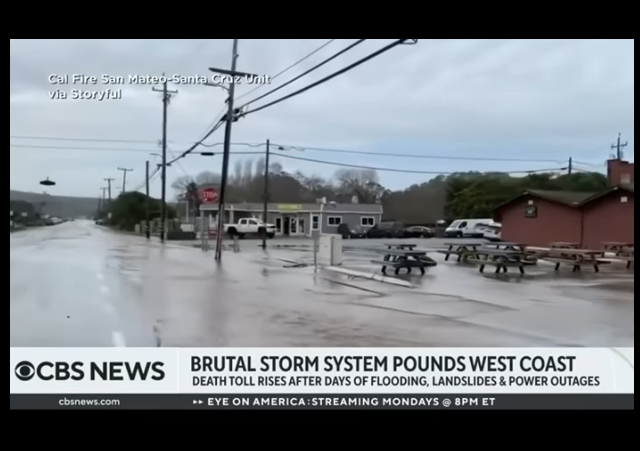 At least 17 people have died and one child remains missing after parts of California were hit by severe storms that caused flash flooding and felled trees, as the National Weather Service warned the inclement weather is expected to persist over the next few days.

The situation is expected to remain dire for the next several days, with the National Weather Service warning that “no significant letup” is expected soon as heavy rains move to Southern California on Tuesday. The heavy rainfall raises the threat of flash flooding and mudslides across various parts of the state, including Los Angeles and San Diego.

The agency also noted that the risk will be higher in regions scarred by earlier forest fires due to these regions having less vegetation. While parts of northern and central California will see some respite, this is expected to be short lived as they face “a never ending parade of strong wet Pacific systems,” the agency added.

It turns out that California’s bureaucrats bought hook-line-and-sinker into the “climate crisis” narrative. So, they failed to budget for the cyclic flooding that is known to occur in this state.

The state government has historically spent more on fire and earthquake safety. But a current deluge of rainfall makes it clear that planning for disasters needs to be broader and more proactive.

Flooding along the state’s coast is expected to cost California more than $1 billion, the Los Angeles Times reported Tuesday. Governor Gavin Newsom already added $202 million for flood investments to his latest budget proposal. But that cash was badly needed years ago. While the California Senate called for extra flood protection in May, the budget only set aside $246 million for risk prevention.

Municipal spending was painfully low with state and local authorities spending $48 million annually. The government estimated in November that between $88 million and $108 million is needed. That figure also pales in comparison to spending on other disasters. Fire protection funding grew from $800 million in 2006 to $3.7 billion in 2022. The state’s last budget teed up $250 million for earthquake-proofing.

Climate nonsense meant fewer funds for flood-control measures, and “experts” wanted to do away with dams and have a more “natural” approach to flood prevention.

“We have to let our rivers flow differently, and let the rivers flood a little more and recharge our groundwater in wet seasons,” Peter Gleick, a climate scientist and co-founder of the Pacific Institute in Oakland, told CNN. “Instead of thinking we can control all floods, we have to learn to live with them.”

Levees have effectively protected communities in the past, Gleick said, but they’re not designed for the climate-change challenges of today.

“We need new thinking, we need to operate that infrastructure differently, we need to change some of the characteristics of that infrastructure,” Gleick said. “That will allow us to capture more of these flood flows, store it underground in these aquifers, and then use those ground water resources when we need them in dry years.”

Many climate experts agree – using levees to prevent floods during the wet season means less water is available to seep into underground aquifers. Those aquifers are a vital source of water for drinking, bathing and agriculture across California’s Central Valley, and they are running dry.

The good news is that the state’s reservoirs are refilling after two weeks of rain. Hopefully, the flowers will be many this spring and the environmental nuts few.

Then there’s building where you would not build except for government bailouts. That’s a subsidy to the first homeowner after bailouts start, not recaptured by successive homeowners.

Because they are run by 12 year olds with no memory.
California is always in a drought until it is flooding and the hills are mudsliding into the valley.
It is a bit odd but the climate change morons think the weather will never change.

Because they prepared for reparations instead of floods.

A lot of the hills around San Diego are so much different than what I expected (being from Kansas). They’re gravel packed with dust, and a sprinkling of grass on top. When they get real rain, the dust turns to a lubricant mud, the gravel acts like ball bearings, and look out below.

The legislature and political dynasty in California are more interested in stripping the State’s wealth from its inhabitants the in such dull responsibilities as infrastructure.

It really is time to change the way the votes are counted.

Nature does not always even up extremes in a gentle way.

This is right up there with the great NSW fires of 2007 (???) when everyone was blaming Mann Made Global Warming ™ and definitely weren’t blaming NSW local government directives that PROHIBITED land owners and house owners from clearing dead fall from their land/houses and PROHIBITED back burning and all those good things people used to do before the catastrophilia of climate change started to disease peoples minds.

Same thing in Melbourne a few years later that resulted in catastrophic, unexpected flooding…but only unexpected to the catastrophiliacs who believed flooding was a thing of the past because Mann Made Global Warming ™.

2020 was bad because several BLM activists started these fires in suburban areas in the middle of covid.

Many moons ago, I lived in Atascadero (Spanish for ‘muddy place’) just off 101

Welcome to the party, pal!

If this were DeSantis in FL, they would black out your TV programming just to interrupt and tell you how bad he is.

I’m from CA. This is not as unusual as they say despite what they’re asserting. My little brother was born during the flood of ’64, We had two big floods in the 1970s. Two more in the 1980s.

I left in ’93 so I missed the three floods in the 1990s and everything since.

The irony is they’re going to get more of these destructive floods as they’ve built all that housing on the flood-plains.

It’s like those people who live next to the Mississippi River and act all surprised when their house floats down to the Gulf… You live in a flood plain, you’re going to get flooded sooner or later.

That “natural approach” is going to destroy Sacramento. The levees are the only thing that keeps the Delta from flooding vast tracts of the city. If they get rid of the dams on the American and Sacramento rivers it will be even more disastrous, not to mention the loss of huge quantities of hydropower.

Then apparently that course of action will be the one Newson will want to take..Like NY, if it caters to the environmentalists..It’s a No-Brainer. and I mean NO BRAIN – er.

Victor Davis Hanson has an excellent talk on this. Pat Brown (D-good) and a spectrum of others wanted to build the real infrastructure such as reservoirs to maintain a good life for 60 million Californians. All this climate change cut out the goals and spent on making Cali the best third world nation state adjacent to the USA. Once upon a time there were real American Democrats…. not anymore.

I suspect we’re going to have a smoky summer.

In my small town in the SF Bay Area, we had 5 inches of rain on Dec 31st and the low-lying areas that were near the creek flooded. The finger pointed started over who was responsible for keeping the creek clear, Of course the county could not manage to schedule their task for a month. Luckily the high school football team decided to perform the cleanup….it had not been done for a couple of years due to COVID….the standard excuse for goverment laziness.