The Usual Suspects Use Pence Classified Docs Story to Absolve Joe Biden, but Not Trump

The Usual Suspects Use Pence Classified Docs Story to Absolve Joe Biden, but Not Trump 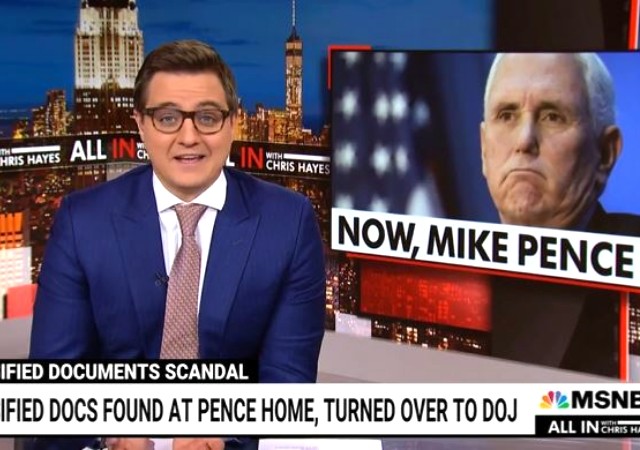 We learned Tuesday that a lawyer for former Vice President Mike Pence had reportedly found some classified documents in Pence’s Indiana home a week ago and upon discovery, turned them over to the FBI. They, along with Biden’s DOJ, have, in turn, initiated a review of the documents.

Though Pence stated two months ago that he did not take any classified documents from the White House and made similar comments just a couple of weeks ago, he is the one who is said to have recently asked his legal team to conduct the search of his home, allegedly “out of an abundance of caution” in light of the Joe Biden classified documents scandal.

Naturally, some of the same media figures who went quiet after the news broke Saturday about even more classified documents being found at Joe Biden’s home jumped on the news about the Pence documents as a way to absolve Biden – but not former President Donald Trump.

MSNBC, of course, led the way, with “All In” host Chris Hayes stating that “Those circumstances highlighted in that letter [from Pence’s lawyer Greg Jacob] sound remarkably similar to the situation with President Joe Biden.” Hayes also went “all in” on the “inadvertent” theme being pushed by Biden’s legal team, insinuating without evidence that in both Biden’s and Pence’s respective cases, it was obvious the taking of classified documents was not an intentional act:

.@chrislhayes: "I literally laughed out loud today when I looked down at my phone and saw the New York Times news alert that classified documents had been found at the home of former Trump Vice President Mike Pence. Honestly it's starting to feel like a running bit at this point" pic.twitter.com/YU3A1E0N8c

“It’s important to emphasize that there’s no reason to assume that the former vice president was lying when he said last summer that he hadn’t taken any classified materials when he left office. In fact, it’s fairly easy to believe that Pence simply didn’t know, and the documents were removed accidentally.

In other words, despite recent GOP hysterics about President Joe Biden, the most likely explanation is that Biden and Pence both inadvertently took documents upon leaving office.”

“Morning Joe” co-host Joe Scarborough used the Pence news to proclaim that both Biden’s and Pence’s situations were similar, and stood in glaring contrast to how Trump allegedly handled classified documents:

.@JoeNBC: "What Pence and Biden did is what law-abiding citizens would do. They find classified documents, immediately contact the authorities, secure them, and get them to the DOJ.

Donald Trump, on the other hand, takes them, hides them, lies, and says they can’t have them…" pic.twitter.com/iEQQBTsFyC

“Deadline White House” anchor Nicolle Wallace declared that if Biden was going to be investigated for “voluntarily” turning over documents including those he’s had since his time in the Senate, Pence better be, too:

"If the Merrick Garland standard for the voluntary return of classified documents is to be applied evenly, then by this time tomorrow…there will likely be a special counsel appointed to investigate classified documents…discovered at…Mike Pence's residence"- @NicolleDWallace pic.twitter.com/y7riTj5QzJ

CNN legal analysts also went with the “accidental/this is different from what Trump did” talking points related to Pence and Biden:

It's just National Security. LOL… nO oNe Is AbOVe tHe LaW 🤡 pic.twitter.com/PcIFogNEsm

Maybe. But prosecutors are able to put blinders on, & a pattern of obstruction like what we saw at MAL sets Trump's case apart

Good grief. They are nothing if not predictable, aren’t they?

On the contrary. They need Pence, because everybody else was a Democrat.
Sometimes you need a RINO in the mix. Like Mrs. Dash.

It’s not a ‘nothingburger’ for them to casually ignore laws that the Little People would get thrown in jail over.

And don’t give me any of the, ‘well the system won’t work if they followed the law’. So then they need to CHANGE the law.

The last 10 years or so the Democrats and the Deep State have decided that they can just arbitrarily ignore the law whenever they feel like it, because they are Important People.

Ruthlessly enforce the law and throw every one of them in prison until they either get the message or do their damn jobs and change the law.

Uh, no, they do not. As someone who has worked with this stuff, you don’t “just take it home.” Normal people would do jail time. The Shillaries, Bidens and Pences do not. Two tiered system.

Well, they want to besmirch Trump and put him behind bars for “something;” it doesn’t matter if it’s legitimate or not. He wasn’t supposed to win so they want him to go down in the history books as having been a disgrace of some sort and they want a conviction on something, anything at which to point.

Pence is a scumbag slimy little backstabber who hides behind a veneer of a ‘nice guy’ just like Mitt Romney.

Yet when Trump got raided, Pence not only did not feel an ‘abundance of caution’, but he publicly gave interviews where he LIED that he had not taken any classified documents and that there was ‘no need’ for ANYBODY to have taken them.

Just another piece of crap RINO trying to destroy Trump but immediately riding to the rescue of a scumbag Democrat.

Because he identifies more with Democrats than conservatives.

The way this has played out so fat tells ya everything ya need to know about 30Pence.

The difference is that BIden and his son have trafficked in classified information, committing treason and espionage.

Tucker did a great segment on this yesterday. An email on Hunter’s laptop that hasn’t been officially released contains classified State Department information that Hunter was feeding to Burisma/Ukraine in return for his no-show job.

It’s like we have only two journalists left in America.
(O’Keefe is the other.)

And also Miranda Devine from the New York Post.

Guess I’ll have to get familiar with them, too.
I also forgot Sharyl Atkisson… but she’s been effectively cancelled, into the dark recesses of “maybe you can come across her twice a year.”

Was Pence “grossly negligent” in handling the classified material, as biden was?

We can of course assume that any lawyer used to go through any documents out of an “abundance of caution” have a security clearance for top secret plus (out of an abundance of caution, since, well otherwise they would be given access to classified material the are not cleared to have access), right?

Or, to put it differently, is having a lawyer rifle through these without them having the proper clearance not committing the very crime? Which would probably make them accomplices so then cannot even claim attorney-client-privilege?

To be fair, there are three overlapping situations here. First, all three of these guys wound up taking ‘oops’ documents home after their job was over, which is understandable given that the office of the President generates tons of paper every year. Generally, NARA finds them in the years it takes to sort through the giant pile and tags them for FBI pickup. No harm, no foul, been that way for ages.

Second, you have classified documents the President has declassified in bulk as they left to add to their personal records for writing books (Biden) or so the government can’t ‘vanish’ the evidence of FBI malfeasance (Trump). Biden’s problem here is he was *vice* President and did not have the unilateral declassification authority that Trump had, so his classified records found in the office are a crapshoot. VP can only declassify documents the VP created, so maybe….

Third, we have outright theft for personal gain. Biden had been doing that as Senator, then as VP, and now as President, all using Hunter as his channel. This is what they *want* to charge Trump with, but in their haste to build a case they forgot to scrub Biden’s document collection first.

“VP can only declassify documents the VP created, so maybe….”
Won’t work for Biden. Everything he ever wrote, he stole from somebody else.
Salute the line and repeat the Marine.

Hayes is such a cuck.

“He does it too!” never worked with my parents growing up.

Some of the media have never grown up.