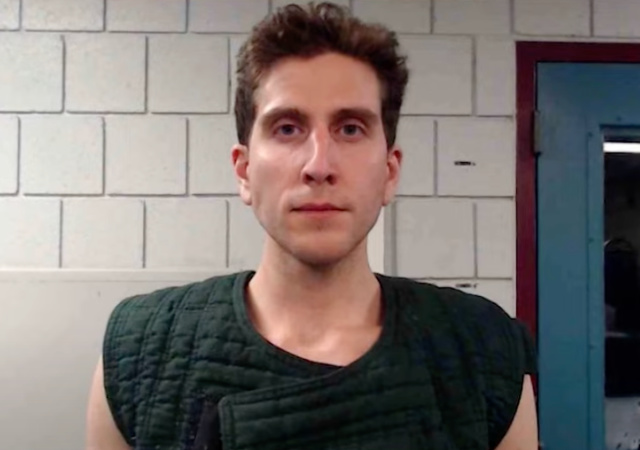 This crime is just going to get weirder and weirder as we learn new details.

The criminology student accused of slaying four University of Idaho students had stalked his alleged victims before the November murders and wore gloves in a supermarket weeks afterwards, according to a new report.

Cellphone data shows that Bryan Kohberger, 28, was often in the same location as the three sorority sisters and one of their boyfriends before he allegedly slashed them to death as they apparently slept at an off campus house, a source close to one of the case’s investigators told The Daily Mail.

Kohberger also seemed to be careful about not leaving fingerprints in public even as he fled to his native state of Pennsylvania in recent days, the anonymous source told the outlet Sunday.

“He’s not stupid and has been very careful,” said the source, who claimed to be “good friends” with one of the cops who had surveilled the murder suspect in the days before his arrest.

“He followed him into a Giant [Pennsylvania grocery store chain] and wore gloves the entire time,” the source reportedly said of his investigator pal.

“Not sure if they ever interacted – but his cell phone pings followed their every move for weeks,” the source reportedly said of Kohberger’s alleged stalking.

Roommates Kaylee Goncalves, 21, Madison Mogen, 21, Xana Kernodle, 20, and Kernodle’s boyfriend Ethan Chapin, 20, were killed in the women’s apartment in the early morning hours of Nov. 13 after a night out in the college town of Moscow, Idaho.

He was very careful.

He carried his smartphone around while stalking his murder victims.

You would be surprised how many otherwise intelligent people don’t realize they are carrying around a tracking device.

You also need to concern yourself with modern cars. They also have built in tracking devices.

After reading the comment by his father today, it sounds like they are almost ready for the truth to come out. They asked for privacy during the inquest but did not aver that their son was innocent as many parents do.

You can be careful about your fingerprints, but it is difficult to murder someone by stabbing without nicking yourself and leaving a little of your own blood at the scene. Using a knife to murder four people, some of whom fought back, is bound to result in some nicks and cuts.

I suspect the investigators have had traces of the killer’s blood ever since the crime. It took six weeks to do the DNA analyses and the genealogical analysis to nail down the likely killer and get the warrants. Once they searched his apartment and got his toothbrush and hairbrush, they had the DNA standard that they needed.

It’s good that this crime didn’t take place in Montana, Maryland, or DC, where genealogical analysis is outlawed.

It’s also possible he wasn’t in the system until they did the old fashioned work and found him first.

“It’s good that this crime didn’t take place in Montana, Maryland, or DC, where genealogical analysis is outlawed.”

I suspect that since he crossed state lines, they could have gotten the FBI to do it, once they cleared their backlog of parents berating school boards of course.

I suspected they had physical evidence from the killer because they were so quick to exclude people, like the two others in the house when murders happened. As far as how he was tracked down that may have been a result of the search for the Elantra. Now if this happened 40 years ago I think it would have gone unsolved. No social media, no cell phones, no DNA.

IOW, some good, old-fashioned police work. With some technological help.
I really hope they can prove this guy did it.

BTW, anyone else see the bit about someone accusing him of being transphobic or some such, then deleting the accusation when asked about it? Ugh.

Narcissists and trannys, but I repeat myself, must find someway to be the center of the story.

Weird and beyond belief. It’s the parent reaction that indicates they may know something they are unlikely to reveal. Unless he confesses that is likely to be a case as well know as the Loeb Murder

My guess is that he will be an incel who was rebuffed by one or more of the women. He is 28 and there has been no mention of any romantic partnerships to date. I had already ruined a number of young women psychologically by that age. 😉

Rather than storming the house, I think it would have been better to have had him approched in public by a single officer, with a buttload of them surrounding the area. He could hav given away A LOT by how he reacted when approached. More than likely he thought that distance and time had put him in the clear, so being approached by an officer could have rattled him in a very telling way, especially if he ran. I suspect he is someone who has an opinion of himself that is not supported by facts and probably hasn’t learned the first law of STFU when challenged. Put “Fitz” on him for a couple of hours. https://www.imdb.com/title/tt0105977/