HOWEVER: “Applicants should not be deterred by today’s order from again seeking relief if the Second Circuit does not, within a reasonable time, provide an explanation for its stay order or expedite consideration of the appeal.” 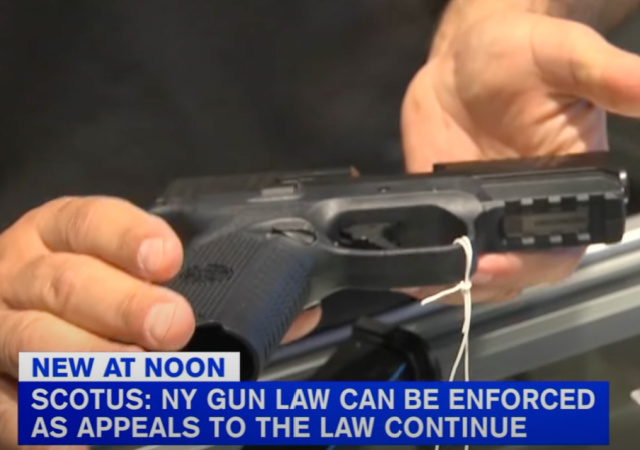 The Supreme Court decided that the New York strict gun laws could remain in place as challenges to the law continue.

A group of gun owners wanted SCOTUS to lift an order that allowed the laws to continue while the appeals court finished reviewing the case.

The New York law at issue in this application presents novel and serious questions under both the First and the Second Amendments. The District Court found, in a thorough opinion, that the applicants were likely to succeed on a number of their claims, and it issued a preliminary injunction as to twelve provisions of the challenged law. With one exception, the Second Circuit issued a stay of the injunction in full, and in doing so did not provide any explanation for its ruling. App. to Emergency Application 2. In parallel cases presenting related issues, the Second Circuit has likewise issued unreasoned summary stay orders, but in those cases it has ordered expedited briefing. See, e.g., Order in Hardaway v. Nigrelli, No. 22–2933 (CA2, Dec. 7, 2022), ECF Doc. 53; Order in Christian v. Nigrelli, No. 22– 2987 (CA2, Dec. 12, 2022), ECF Doc. 40.

I understand the Court’s denial today to reflect respect for the Second Circuit’s procedures in managing its own docket, rather than expressing any view on the merits of the case. Applicants should not be deterred by today’s order from again seeking relief if the Second Circuit does not, within a reasonable time, provide an explanation for its stay order or expedite consideration of the appeal.

In summary, Alito and Thomas agree that the issue raises “novel and serious questions.” But they also respect the appeals court’s independence to work on its own docket. There is no need to interfere with the case.

In June, SCOTUS ruled that New York’s concealed carry law was unconstitutional. You had to present “probable cause” to conceal carry your handgun outside your house.

A week later, the 2nd U.S. Circuit Court of Appeals in New York City reversed Suddaby’s decision, allowing the gun law “to stay in effect until a three-judge panel decides on the motion to stay.”

There are so many lawsuits in flight that I’ve lost track of which parts of the laws each one is challening.

Does anyone have a good roll-up of the active suits?

Check out the Second Amendment Foundation.

Well, at least they haven’t lost much of anything. The Sullivan Act was law in NY for about a century before anybody thought to really question it.

It sounds like there was plenty of support for the New York gun owners. The comments from Alito and Thomas serve to put the 2nd Circuit on notice that they need to explain their reasoning and move the case forward rapidly, or the SC will take action. IIRC the 2nd is receiving full briefing this week.

CA2’s reasoning will be as result-oriented as anything CA9 cooks up.

It’s just so frustrating that no matter what happens in the courts these states just turn around and pass new laws when court decisions don’t go their way.

It would be nice to file personal lawsuits over this kind of bullschiff. When they have to pay out of their own pocket for ignoring a SC decision.

Like stop signs in Florida, the Supreme Court’s decisions regarding New York are only “suggestions”.

Yes, of course.
When President Trump issues an executive order, Democrats shop for a simple federal district judge who immediately issues a nationwide injunction, no problem.
When the State of New York enacts a patently unconstitutional law, the law stays in place while the appeal is processed.
Yes, of course.