Greg Abbott: “Biden does not want America to see the chaos that he has caused on the border.” 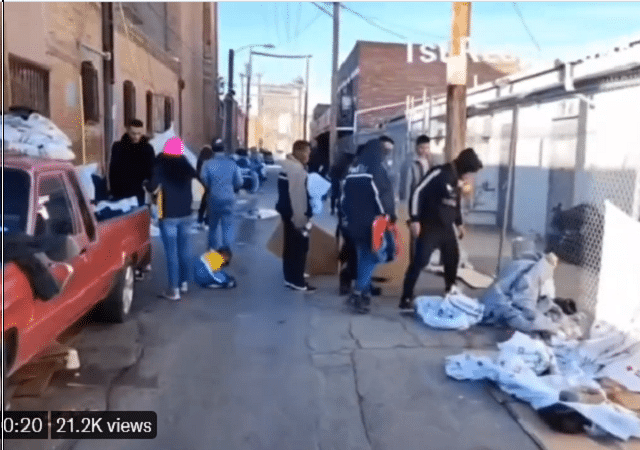 The Biden border crisis has spun so far out of control that the White House is finally sending him to the border.

In preparing for his arrival, El Paso and the Border Patrol have been clearing out evidence of the crisis Biden’s open borders policies have wreaked, however, so Biden won’t get to see the suffering, destitution, and homelessness he has willfully created. More importantly, of course, the resulting photo-op visit will not shed light on the humanitarian crisis for Americans.

Biden does not want America to see the chaos that he has caused on the border.

This is just a photo op and a game of pretend.https://t.co/4KJqorJjrP

Democrat-run El Paso, Texas, is clearing out large migrant encampments from downtown streets ahead of a scheduled visit on Sunday by President Joe Biden.

Since last week, police have moved hundreds of migrants to less visible areas of the city, as carjackings, stolen property, and drug distribution spiked with the arrival of thousands of illegal immigrants, the Washington Examiner reported. Law enforcement agencies said businesses have struggled with crime as migrants, primarily from Venezuela, have camped out on city streets.

Biden is visiting the border city ahead of meetings next week in Mexico City with Canadian and Mexican leaders. His visit comes as his administration on Thursday unveiled a policy that permits 30,000 people per month from Venezuela, Cuba, Haiti, and Nicaragua to obtain temporary work in the United States. The new program will allow migrants to travel directly to the United States, bypassing an asylum application at the southern border, after applying on a mobile app.

I walked through the streets of downtown El Paso ahead of Biden’s visit with former City Councilwoman Claudia Rodriguez, who says she was ousted for calling Dems out by name for the border crisis in her city. Here’s what she had to say @DailyCaller pic.twitter.com/CIR16bIHO6

This is the product of Biden’s broken border in El Paso, Texas.
To word it simply, this tragedy is INHUMANE and LAWLESS. pic.twitter.com/QhlqxEVeRc

In the week before President Joe Biden’s trip to El Paso, Texas, Customs and Border Protection officers, as well as El Paso city police, began arresting migrants sleeping in the streets outside a Catholic church shelter and bus station, according to new footage obtained by NBC News.

In the videos, border agents can be seen patrolling the streets on Tuesday night, driving up in vans with flashing lights and rustling tents where families were sleeping. Immigration advocates say the proximity of the arrests to a church shelter may violate the Department of Homeland Security’s policies.

The person who shot the videos, a volunteer at the shelter, estimated to NBC News that approximately 100 to 150 migrants had been arrested and that more migrants sleeping by the bus station were taken into custody later in the week.

. . . . The number of migrants crossing into El Paso reached record highs, as many as 2,500 per day, in mid-December, but has since slowed, according to Border Patrol officials.

. . . . The location of the arrests outside Sacred Heart Church may be in violation of the Department of Homeland Security’s guidance, according to Lisa Graybill, vice president of law and policy at the the National Immigration Law Center.

“The cynic in me contemplates the possibility that this was a cleanup action intended to showcase El Paso in a particular light and the president’s enforcement actions in a particular light,” said Graybill. “I think the irony is that what you see in this video, what we’ve been told by our partners on the ground, that is in direct contraction to the kind of reasoned and sensitive and law-abiding proposals that he made at the beginning of his administration about respecting areas like churches and organizations that are providing social services. So it’s a really painful contradiction.”

So now a Biden staged propaganda event on the borderhttps://t.co/N1co6qD1KA

El Paso being cleaned up as if nothing unusual ever happened there. Just in time for Biden's "visit to the border".

We suggest just landing in Des Moines, Iowa and telling him it's El Paso. He'll never know the difference.

Hand-delivered a letter to President Biden today during his first visit to the border.

I’m calling on Biden to do his constitutional duty to protect our nation. pic.twitter.com/cy8xgh5EJ2

President Biden’s border visit today is to a sanitized version of El Paso.

He has no plans to enforce federal immigration laws.

Texas will continue our historic border mission to protect our state. pic.twitter.com/UelZRg0Zts

Yeppers…the only thing better if the illegals are shipped to Chicago and New York!……

Clown show all around….

“Since last week, police have moved hundreds of migrants to less visible areas of the city”
Martha’s Vineyard was unavailable?

exactly. He is enough of a loose cannon that if he saw the actual state of the border, he might let something slip at a later press conference. And then KJP would have to work again…

I know, And those people never want to work unless they have to.

/government employees. who did you think I meant?!?

No, the exact opposite. Potemkin lack of village! Potemkin clean streets!

Do you think Biden even knows they were there?

Does he even know where he is?

“Here–read off this card. Now, sign this paper. That’s right, you’re the Big Guy. Now sign one more paper and then you can have your pudding.”

The one thing you will never hear Biden say: “Hey! What happened to all the illegal alien encampments?”

How could he? As far as he knows, there are no problems in this country. He knows only what he’s been told. No more. No less.

The arrogance is on a level that Marie Antoinette would envy. Maybe Biden and his handlers will someday lose their heads as well.

Food Stamps Update: 28 States Extend Additional Emergency SNAP Money Through January
Every year, SNAP is adjusted for inflation through a cost-of-living adjustment (COLA). SNAP benefits were boosted by 12.5% for the 2023 fiscal year. The COLA kicked in on Oct. 1, 2022, and will run through Sept. 30, 2023. Because of the recent COLA, benefits increased by $104 each month for the average family of four. The maximum benefit for a four-person household is now $939 a month, up from $835.

Wow! That is a lot of money for just four people. I would have no problem feeding a family of four on that amount of money, and I think we would eat well.

Assuming for the moment that food stamps are a good idea, one would think that the amount of money provided should be carefully chosen to make it difficult to feed one’s family. But that amount of money makes it effortless and provides no incentive to do anything other than continue to receive food stamps.
Just sayin’.

Back in my college days (late 60s early 79s, the poor got sacks of corn beak, flour, canisters of powdered milk, some sugar as I recall. That was it.

I remember because one time my family had to rely on the gov handouts and they gave my dad the biggest bag of beans I ever saw. I was like7 and thought it was for a giants family

It probably was 40 lbs, 40 lbs of dried beans… and we were great full for that., but my parents were very embarrassed , shamed really. I don’t remember the whole story, but it was the only time. I’m Guessing before he got the job as a Millwright at Allen Bradley . It was a great company and paid very well.
The Bradley’s were Milwaukee’s #1 philanthropic family. 10,000 factory workers, huge Christmas parties for the workers families with a real musical show, we rode the HUGE factory elevators and at the end, Santa gave out these amazing gifts to every child, and I mean every, sleds bikes bags of candy.
It was a wonderful
Company and tried to stay fully American as long as it could.
Its 4 clock tower is larger than Big Ben in England. They were very proud of that
It was a good time to be a kid in the late 50’s…

I seem to remember big bricks of cheddar cheese.

Allen Bradley was not just great for its people. They made an AMAZINGLY high quality product line.

Yes they did and people were proud to work there

What did Cardinals families get? Bird seed?

Allen-Bradley has made me a bunch of money programming, debugging and troubleshooting their SLC-5, PLC-5, Micrologix and Compactlogix plc hardware!

I get that people fall on hard times and need assistance, but, all these entitlement programs seem way out of control and have clearly expanded beyond the scope of temporary assistance for truly needy recipients, to become permanent handouts and way of life for an absurdly high number of recipients. If parents can’t feed their children out of their own pocket, they shouldn’t be having kids in the first place.

If President of the Galaxy there is wearing his peril-sensitive aviators like usual, why do they have to clear streets? He won’t see anything disturbing whether it’s there or not. Ain’t technology grand.

Maybe they should have just used the set at the White House.

It’s a game called “pretend”. It’s an inside joke. Everyone knows about it but Biden.

True that, but he had to
Meet with the cartel leaders

As told to Judge Roy Bean ….

Out in the West Texas town of El Paso
I fell in love with a Mexican girl. Night-time would find me in Rosa’s cantina; Music would play and dr Jill would whirl.
Blacker than night were the eyes of dr Jill, Wicked and evil while casting a spell.
My love was deep for this Mexican maiden; I was in love but in vain, I could tell.
One night a wild old cowboy came in, Wild as the West Texas wind.
Dashing and daring as his pants were leaking stool…,
A drink he was sharing
With wicked Dr Jill, The girl that I loved.
So in anger I
Challenged his right for the love of this maiden. Down went his hand for the depends that he wore.
My challenge was answered in less than a heart-beat; The ugly old young stranger lay dead of fright on the floor.

If I was a border patrol grunt I’d be advising the illegal aliens how to get around the blockades when pedo joe shows up.

The Roman Empire was lost to barbarians. Same fate for America.

Indoctrinate as many Western civilization people as possible that they are chock-full of White privilege and to make amends to all non-Whites Western country borders must be thrown open to allow the barbarian hordes from 2nd- and 3rd-world countries to enter and transform the West into a New World Order where the elite-owned one-world government can take control.

Welcome to El Paso, the current situation has been cultivated and facilitated by the community and local politicians. This is a city that was never told the truth about the effects of human trafficking, drug trafficking and the cartels on their community. They have fought tooth and nail against every effort to control the border. Their crime statistics are made up out of whole cloth in order to cover up the actual state of affairs.

This time they’ve gotten in over their heads and want Uncle Sugar to pay for their largesse. And when Uncle Joe wants a photo op, then they fall into line and make all those inconvenient people vanish and line up to kiss his ring.

I’m truly having trouble feeling bad for those living in a city that is getting more dangerous by the day because they have created the conditions they are living in…. they’ve made their beds, now they can live in it.