“CatholicVote has found that only about 25% of the cases have had an arrest made in connection to the attack. The Biden administration has thus far refused to act to protect Catholic churches and stop these acts of domestic terrorism.” 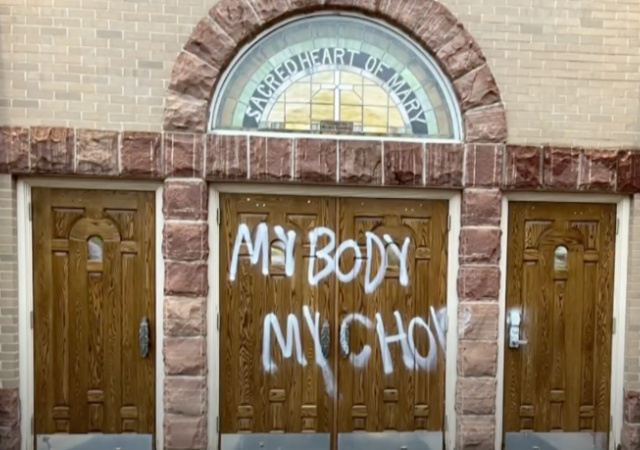 CatholicVote revealed over the weekend that at least 275 Catholic churches had been attacked since May 2020. The attacks grew in May 2022 when someone leaked the SCOTUS opinion overturning Roe v. Wade.

CatholicVote has found that only about 25% of the cases have had an arrest made in connection to the attack. The Biden administration has thus far refused to act to protect Catholic churches and stop these acts of domestic terrorism.

These attacks are in the U.S. I’d go into the attacks across the world, but I’d need a novel.

I’ve been trying to keep up with the attacks against Catholics and pregnancy centers, even those that offer abortion services or recommendations.

CatholicVote spent $1 million on an ad against our supposed “devout” Catholic President Joe Biden because he’s passe about the violence against Catholic Churches.

Associate Attorney General Vanita Gupta told CatholicVote the DOJ would initiate a “15-day review to ensure that all appropriate resources are being deployed to protect houses of worship.”

Haven’t heard anything but silence.

Catholics are some of the most outspoken people on ending abortion. It’s been the church’s teaching since the beginning: “Since the first century the Church has affirmed the moral evil of every procured abortion. This teaching has not changed and remains unchangeable. Direct abortion, that is to say, abortion willed either as an end or a means, is gravely contrary to the moral law” (No. 2271).

The FBI recently offered a reward for information about attacks on 10 pregnancy centers.

Only 10, though. 78 centers have been attacked since June when SCOTUS overturned Roe v. Wade.

My fellow Catholics. It’s time to fight back. We don’t wear our religion on our sleeves and respond with kindness and prayers for those with hearts filled with hatred and ignorance.

We can keep doing that, but it’s time to fight back. How? I don’t know. Be rough around the edges like me. You know what I mean if you know me in person or follow me on Twitter.

There is a difference between vandalism & terrorism. The latter is much worse. Claims of terrorism should be reserved for actual terrorism.

How about bright lighting and security cameras? Less hyperbole?

I don’t approve of vandalism, but it is not the same as a sniper opening up on people as they are leaving, that would be actual terrorism..

Under the title there is a paragraph claiming “domestic terrorism.” If all that has happened is vandalism, than that is what it is. If there is actual terrorism than that should have been in the article. I don’t like abortion, I would prefer people who do not want babies use birth control. There are most certainly a large number of irresponsible, generally low class people who do not bother to use birth control and get frequent abortions. I don’t like that, I dislike people who have children and then fail to nurture, that is bad for those children and even worse for society.

Agreed.
Vandalism is not “domestic terrorism”.
“Domestic terrorism” is slitting the throats of flight attendants, luring pilots out for the same, then flying the planes into office buildings, killing everyone on board and almost everyone in the buildings.

Well, one might argue that’s foreign terrorism, when foreigners did it.
But it IS domestic terrorism when what they write says, “If abortion isn’t safe, you aren’t, either.”

As a thought exercise, substitute “slavery” when you use the word “abortion.”

Of course legal abortion presupposes the chattel slavery of the unborn child, so if you do not oppose abortion, you actually support the principle of human beings as property under certain circumstances.

Have you noticed either of those things happening since Roe v Wade was first decided?

From what I understand, Muslims are not too keen on abortions. Why aren’t these “peaceful protests” being committed against them?

Because they’ll fight back.

After the Vax mandates and threats thIs exact same crowd made..,, up to and including prison and death for those refusing to inject an experimental drug into their bodies… they have FOREVER lost the ground to state “my body my choice”EVER… and they need to be called out and shut down as soon as they start spouting their utter hypocrisy

These terror attackers are agents of the DNC. PERIOD.

Your body stops where the baby’s body starts. What you are claiming it’s your body is a Slavemaster.

No, they actually have the gall to claim their body is a slave to the baby.
You signed that contract, girl, the baby wasn’t even there.

To fuck or not to fuck is the question. The Pro-Choice ethical religion adopted by diverse Liberal sects deny the dignity and agency of women and men, and normalize the progress of human life as negotiable commodities. Elective abortion is a wicked solution to a hard problem: keep women affordable, available, and taxable, and the “burden” of evidence aborted, cannibalized, and her carbon sequestered in darkness.

Six weeks until baby meets granny in legal state, if not in process.

Women and men have four choices, and an equal right to self-defense through reconciliation.

My body, my Choice is the forward-looking wicked solution to a hard problem: keep women affordable, available, and taxable, and the “burden” of evidence aborted, cannibalized, sequestered, and feminist leverage, and masculinist indemnity.

To fuck or not to fuck is the first choice. To prevent conception is the second choice. To seek adoption is the third choice. To be caring and embrace responsibility is the fourth choice. Self-defense through reconciliation is a human and civil right of females and males, equally. The wicked solution, the final solution, is neither a good nor exclusive choice. Women and men, girls and boys, “burdens” h/t Obama… babies… fetal-babies, humanity deserve better representation.