The FBI wants information regarding 10 attacks, though 78 centers have been attacked since June. 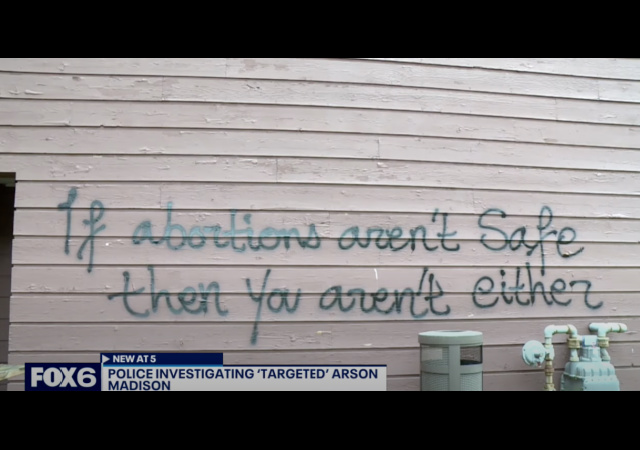 Vandals have attacked at least 78 pregnancy centers and 108 churches since the Supreme Court overturned Roe v. Wade in June.

The FBI announced a $25,000 reward for information about 10 of the attacks . . . seven months after the attacks started:

The FBI is seeking the public’s help to identify the individual(s) responsible for a series of attacks and threats targeting reproductive health service facilities across the country.

As part of a national awareness effort, the FBI is offering rewards of up to $25,000 for information leading to the identification, arrest, and conviction of the suspect(s) responsible for these crimes.

“Today’s announcement reflects the FBI’s commitment to vigorously pursue investigations into crimes against pregnancy resource centers, faith-based organizations, and reproductive health clinics across the country,” said FBI Director Christopher Wray. “We will continue to work closely with our national, state, and local law enforcement partners to hold responsible anyone who uses extremist views to justify their criminal actions.”

The FBI can investigate the incidents as potential acts of domestic violent extremism, Freedom of Access to Clinic Entrances Act (FACE Act) violations, or violent crime matters, depending on the facts of each case.

Links to seeking information posters for these arsons and potential FACE Act violations, as well as press releases about them, are included below.

FBI offices in the cities where the attacks occurred offered rewards. But this is the first time FBI headquarters stepped in.  The FBI hasn’t even arrested anyone connected to the attacks.

Maybe the FBI is busy in Atlanta ignoring ANTIFA.

Oh, … the FBI forgot to mention this, but anyone who comes forward with such information will be doxed, leaked, audited by the IRS, their residence raided and employer will be threatened. When you get to the FBI office, please get in line in front of the guillotine with Merrick Garland’s framed photo above it. A comrade will be with you shortly …

Sorry big thumb was an up vote

Guess they will move the funds internally then…

F thru have already told you who they are, This is ridiculous

Pro-Choice, DIE, and the pursuit of Equity.

The Pro-Choice threat: either abort the baby or we will abort you… and the little baby, too.

Too little, too late to be serious.

Looks like a cheap fig leaf of pseudo even-handedness.

Hope they don’t need to pass another trillion dollar spending bill to afford such an extravagant reward.

Hey! You can buy the rear half of a brand new truck with that!

Dept of Injustice does not want to solve these crimes.