“We have now lived with the consequences of Ruth Bader Ginsburg’s late-life arrogance for more than two years.” 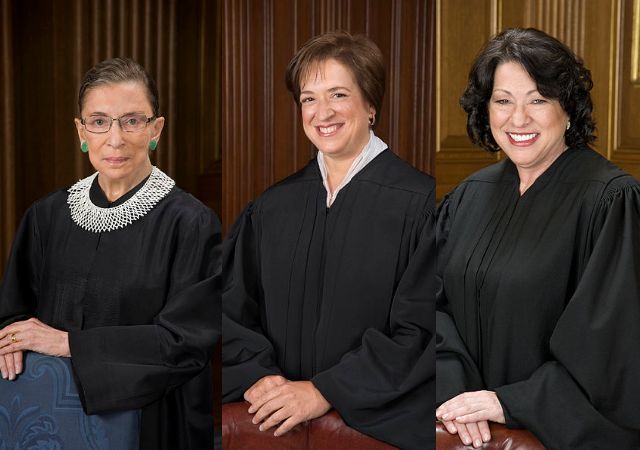 Progressive activists are mounting a pressure campaign to get Justice Sotomayor, and possibly Justice Kagan, to retire from the U.S. Supreme Court, so that Biden can appoint two younger and presumably further left judges.

These folks are thinking back to what happened with Justice Ginsburg and they don’t want to go down that road again.

What to do about Sotomayor

Back in 2013, then President BARACK OBAMA quietly met with Supreme Court Justice RUTH BADER GINSBURG to subtly encourage her to retire before Republicans flipped the Senate. She didn’t, and the GOP went on to control the chamber for the following six years.

Back in 2021, liberal activists openly campaigned for Justice STEPHEN BREYER to retire, fearful Democrats would similarly lose control of the Senate in the midterm cycle. He did but the party didn’t.

Now in 2023, the conversation is starting all over again with 68-year-old Justice SONIA SOTOMAYOR, with a few think pieces and podcast episodes urging her (and sometimes fellow Justice ELENA KAGAN) to step down, and for the White House to nudge them in that direction.

But, so far, the main party organs and progressive think tanks aren’t biting.

“I certainly understand the argument and think it is fair to ask the question, but we do not plan to mount any campaign on this like we did last year for Breyer,” said BRIAN FALLON, the head of Demand Justice, which hired a billboard truck to drive around the Supreme Court in 2021 urging Breyer to retire. “No judge is above reproach, but as crisis-level situations go, this does not seem as acute as Breyer was, or even as urgent a problem as, say, the Democrats’ ongoing refusal to get rid of blue slips.”

Brian Fallon is the Hillary Clinton 2016 spokesman who went into judicial activism after she lost. He and his group ‘Demand Justice’ are not the only ones pushing for this.

The liberal publication VOX published this article just a few weeks ago:

Sotomayor and Kagan need to think about retiring

We have now lived with the consequences of Ruth Bader Ginsburg’s late-life arrogance for more than two years.

In 2014, President Barack Obama was in office and Democrats controlled the Senate, empowering them to confirm a new justice if Justice Ginsburg had left the Supreme Court. Ginsburg was a two-time cancer survivor in her 80s, the oldest member of a 5-4 Court where the right to an abortion — and perhaps even the right to vote in reasonably fair elections — teetered on a knife’s edge.

When she died in the final months of the Trump presidency, Ginsburg told her granddaughters her last desire: “My most fervent wish is that I will not be replaced until a new president is installed.” It amounted to nothing. Ruth Bader Ginsburg’s seat on the Supreme Court, a seat that until recently belonged to the greatest women’s rights lawyer in American history, is now held by her ideological opposite.

Now, eight years later, the question arises: Should Justices Sonia Sotomayor and Elena Kagan, 68 and 62, respectively, do what Ginsburg would not?

I suspect that one of the reasons the left is going after Sotomayor is because she has spoken publicly of her friendship with Justice Clarence Thomas, who she describes with great warmth.

What Justice Sotomayor said about Clarence Thomas should have been trending all day instead of what Hillary Clinton said about him. Watch this: pic.twitter.com/JMd1bnCU7T

Sotomayor and Kagan should tell these activists to pound sand.

I’m sure it will work out for them just like it did for RBG.

Democrats. Always scheming and planning and calculating. They are not good people.

They never “won” anything. They stole it.

At this point, does it matter? They’ve taken over just about everything.

“It is the common fate of the indolent [*] to see their rights become a prey to the active [**]. The condition upon which God hath given liberty to man is eternal vigilance; which condition if he break, servitude [***] is at once the consequence of his crime and the punishment of his guilt.” John Philpot Curran (1750- 1817).

** The active – experience has taught that the left has a never-ending list of stupid, freedom-depriving ideas; the left will NEVER leave us alone. Green New Deal; elimination of 1st Am., 2d Am., mail-in voting, shut-down orders, and on and on

*** Servitude – comes in a variety of forms, from detention (jail, stay-at-home orders) to economic deprivation via regulations (which always result in bigger government, higher prices for goods/services and greater unemployment) to increased taxation

Yeah I suppose you’re right. But those ‘breaks’ amount to living life normally.

But it’s why they win, “normal” to them is insanity, cutting off 13 y/o boobs, making penises out of your arm, men chest feeding babies, taking control of your schools, your workplace, your religion for God sakes

Maybe we can stay vigilant in shifts, I’ll take 2 years then live normally for 5, next man up

How many other justices have retired at their age, having only served for a decade and a half? In modern times?

“We have now lived with the consequences of Ruth Bader Ginsburg’s late-life arrogance for more than two years.”

Do Kagan and Sotomayor have Corvettes in their garages? This could always be resolved that way.

Forget modern times, Sotomayor is only 68 years old and Kagan is only 62!

Without extremely extenuating circumstances, I’d be shocked if ANY previous SC judge retired at 62.

Isn’t it sexist that male SC Just-Uses get to keep their seat until they die, and female Just-Uses must give up their seats 20 years sooner?

But I thought the federal courts were not political? Chief Justice Roberts said so.

The late Epstein and his handlers told – and tell – Roberts what to say.

When she died in the final months of the Trump presidency, Ginsburg told her granddaughters her last desire: “My most fervent wish is that I will not be replaced until a new president is installed.”

Why are they reporting this as fact when there’s nothing showing she actually said that and was anything more than a lie from her family to try to sway opinions.

“facts” are a stumbling block for Dems and media.

And what if it was true. Who cares what Ginsburg wished fervently or not.
I don’t think there is any Constitutional or US Code pertaining to fervent wishes of dying SCOTUS justices.
My not dying wish was that no one as anti the US Constitution as Ginsburg ever be put on SCOTUS again and yet Ketanji Brown Jackson was seated not long ago.

SIlly person. You have to die first. Genies are not that easily fooled.

Who cares what she said? Even if she broadcast it on national television, RBG had no control over her successor.

This is basically wish casting. While we mostly disagree with Sotomayor she isn’t 100% bat crap, Kagan is less extreme. Both are less radical than Justice Jackson.

That’s what the radicals want to see appointed to SCOTUS in their stead. Two rabidly radical, totally ideological replacements who will use their position to enact the wishlist of leftist progressives despite or perhaps even b/c the Congress refuses to adopt the Cray Cray policies of the left.

Well, Sotomayor WAS the least mentally competent justice in my lifetime before Jackson was appointed.

It’s a race to the bottom. There is always a beer to be held.

IDK your age but the Warren CT had some real doozies in their decisions as did the Burger CT. Jackson is, IMO, smarter than Sotomayor and more purely ideological in her reasoning which makes her more dangerous.

All I can say is after watching the authoritarian disaster that Garland has been running for the last two years, thank God that Mitch didn’t bend like a normal Republican and let Obama slip him into the Supreme Court. When Trump won instead of Hillary, it would have been so easy for him to bend in late November and wave him in.

Women and minorities make the best human shields.
If they could appoint toddlers to SCOTUS, they’d do that, too.

I daresay I think the left prefers women and minorities in positions of “power” because they view them as being more manipulatable. Same reason why they promote morons far beyond their level of incompetence: it allows them to pull the puppet strings with impunity.

Leftists can’t define what a woman is. How can they care about something they can’t define?

I want Biden to nominate the first “trans” Supreme Court Justice and for him/her/it to be confirmed. Let them do it. At some point we’ll then have 8 conservative Justices to balance they out.

I know a luggage fetishist who’s looking for work.

Nahh. He has too much baggage.

It has become so obvious (and, I think the best word is: ugly) that the Socialist-Progressives are so desirous of having a majority on SCOTUS that they will go to the extreme of assassinating a judge to open a position on that body that will give the powers running the pResident the opportunity to nominate one of their own – and all of the Senators, who owe those powers, like good little sheep, will line up to be the first to raise their hand Aye.

They made a movie about that….”The Pelican Brief”. Except it was evil Conservatives that did it… of course.

Hilarious. Seems like they just got there. Democrats must be really pooping their pants over 2024!

The karmic irony, the dark sarcasm of the Pro-Choice ethical religion.

Weren’t these the same people who claimed there were no Obama judges as Trump used to say?

Not a fan of either of them, but if they are healthy then I see no reason for them to retire. If I was in that position, I’d tell them, “The only way you’ll get me off the bench is if I’m taken off it in a horizontal fashion.”

Hey, they have a few more historic firsts to pick off, so better get on it.

Memos for Wise Latina and Kagan:

2. Progs always tell you that you’re their best friends…until you aren’t.

By the left’s standards, isn’t this highly sexist and racist?

How about they stop hiding whoever leaked Alito’s draft opinion on Dobbs? That might, or might not, speed up getting rid of one of them.

Wait … who will be in charge of leaking draft opinions if Justices Sotomayor and Kagan are gone?? I don’t think the progressives have thought this through!