All the news about carbon dioxide levels, temperature, and climate that you will not be hearing about at the World Economic Forum in Davos. 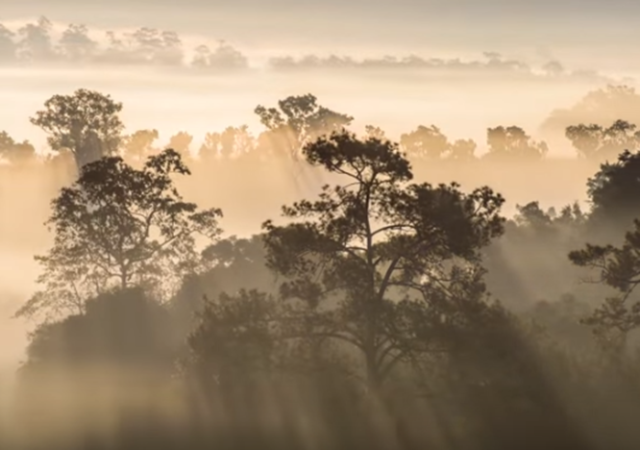 I recently covered a CBS 60 Minutes segment featuring humanity-hating Stanford Professor Paul Ehrlich and other doom-casters who asserted we were poised to experience the dreaded “Sixth Mass Extinction event.”

To counter this narrative, I found an article about a scan of a section of the North Atlantic that revealed the remnants of a massive pulse of hot rock that initiated a rapid climate warming event 56 million years ago. [Emphasis mine.]

The climate event, known as the Paleocene-Eocene Thermal Maximum (PETM), warmed the already-hot climate of the time by about 5.6° C due to a jump in atmospheric CO2. Levels of that greenhouse gas rose from about 1,120 parts per million to about 2,020 ppm—much higher than today’s 417 ppm.

Although it didn’t trigger a major extinction, it still exterminated some deep-sea creatures and tropical plants. Scientists want to understand the PETM better, because it’s an example of how the Earth reacted to a rapid rise in atmospheric CO2 a bit like we’re currently experiencing, albeit starting from a hot, ice-free climate.

Although the cause of PETM has been debated since it was discovered in the 1990s, more and more evidence has accumulated that points to massive quantities of CO2 and methane emitted due to volcanic activity in the North Atlantic as the primary cause. This activity created what’s now known as the North Atlantic Igneous Province— the same kind of enormous volcanic phenomenon linked to climate disruption and extinctions at other times in Earth’s past, like the end-Triassic, the end-Permian, the early Jurassic, and others.

Let’s pull these paragraphs apart. So, during an era with 2.7 more carbon dioxide than today, the planet was lush, and lifeforms thrived.

Due to a pulse of hot magma, that carbon dioxide level jumped to almost five times what we have today…and there was no mass extinction. Yes, a few deep-sea creatures took a hit. But the geologic record is filled with Darwinian losers.

Finally, 56 million years ago, mankind evolved to the fuzzball stage, so it could not impact the gas levels.

The fossilized remains of a tree-dwelling fuzzball smaller than a mouse are giving scientists a “unique” glimpse of how one group of primates looked shortly after it diverged from the line that would later become monkeys, apes, and humans.

The remains, unearthed in China and estimated at 55 million years old, are some 7 million years older than the next oldest primate fossils, according to a team of scientists describing the discovery in Thursday’s issue of the journal Nature.

I bring this up because anti-fossil fuel activists such as Helena Gualinga are being featured at the World Economic Forum in Switzerland.

The 20-year-old Indigenous youth climate advocate is speaking on several panels at the World Economic Forum in Davos, Switzerland, this week, sharing the stage with the likes of John Kerry, the US Special Presidential Envoy for Climate, and IKEA CEO Jesper Brodin.

…At Davos this year, Gualinga wants to see “a real commitment to climate action.”

“There’s big oil and big mining attending, and I think they really need to commit to phase out from fossil fuels,” she said.

“It’s not like COP, where they can sign something,” Gualinga said. “But I think it’s an opportunity for the private sector to show their commitment without the pressure of the binding commitments that governments have.”

Gualinga added that taking action on climate is not as easy as making a campaign about sustainability or supporting a handful of small projects.

“I think, unfortunately, we’re just seeing more and more and more greenwashing. In one way or another, every company now has had a campaign that is green or sustainable, or, you know, something that makes them look like they care about the planet.”

He proclaims the WEF and it’s global affiliates need to “reign in” the anti climate activities of the fossil industry #wef23 pic.twitter.com/LAlfkSC6AY

If the participants at Davos were seriously interested in preventing extinctions, they would target the Chinese fishing fleet.

Which is how Anderson Cooper has a completion so pale that his veins shade his skin a vampire-like unnatural blue of non-fat milk.

Nobody did Gore better than South Park, in the ManBearPig arc.

And he is a true authority, having earned C- and D+ grades in science during college.

Why is this man even remotely relevant to anything but creating hot air?

Paul Ehrlich is a reprobate who has been yammering his doom and gloom prophecies for longer than most of his current Gen-Z new coterie has been alive. TBH, I thought he six feet under or compost by now.

Yup. We were all going to freeze in the new ice age when I was in high school.

When I was in HS in ’71 (I’ll give you a moment to do the math.), my young, earnest chem teacher told us he would not have children since he expected he would live to see them starve to death during the New Ice Age. Which was to start in 1980. I’m sure that right now he is just as fervent a believer in “climate change” causing “global warming”. It’s a religious belief, inured to reason – or actual science.

To be fair, anyone around Lake Erie in the winters of 77 and 78 would have believed that we were in an ice age.

Fire is a sick man. I think his mind is rotted as much as Biden’s.

“The 20-year-old Indigenous youth climate advocate”
This whole movement seems to be comprised of the overly young, inexperienced, and zealous (“how dare you?!”), and the overly old and stupid (or venal).

As for Anderson Cooper, I still haven’t recovered from my discovery of last week that the man is a literal Vanderbilt scion.

China is destroying the world and they are all bought out

It just took 2 decades and they caved

The world is not going to end in 2030and a fewer people will die if it were a few degrees warmer. Given that China and India, etc are not going to do a thing, no one else should spend a penny of public money on reducing or replacing fossil fuel usage. All that public money should go into two things, using fossil fuels to bring third world countries out of poverty and spending a ton on scientific research for a leap in technology to truly cheaper energy that requires not a penny of public money incentive for adoption – probably some variety of nuclear energy. Note the private jets these folks came to Davos in. IMO this has always been a scam about power and money.

CO2 does not cause warming.

Venus was once thought hellish because it’s atmosphere is nearly all CO2. But Mars’ is too, and it’s frigid. (Even though farther from the sun, if CO2 was a “greenhouse gas”, it should be trapping heat there too, causing the planet to warm.)

It is not known what drives cycles of warming and cooling, although most sensible scientists (called “geologists” and “astronomers”) believe the sun is responsible. Now there’s a thought.

The geologic record shows that CO2 increased after the climate warms. This is one of the things that Al Gore famously, and probably purposefully, got wrong in his children’s book. In the book, he displayed a graph of global temperatures over geologic time, and switched the labels of the traces for “temperature” and “CO2 level”. The error was pointed out after the first printing, but never corrected in latter editions.

Carbon is the building block of life, yet known idiot John Kerry states publicly that we “have to get all this carbon out of the atmosphere”.

CO2 increase lags temperature increases because solubility of CO2 decrease with increasing temperature. Hence, the oceans release CO2 to the atmosphere after they get warmer. This effect is well known (carbonated soft drinks are filled at cold temperatures in order to get the right amount of CO2).

Agreed. However, good luck getting grants and publication approval for solar studies focused on how much the Sun impacts Earth’s climate!

Every model relied upon by activists has failed and new research consistently shows science less than “settled,” yet the agenda advances without serious opposition. Rather like the corruption of our federal institutions/bureaucracies, all seem to be circumstances beyond the reach of we mass of deplorables.

Q: Why aren’t the activists at Davos/WEF confronting the Chinese about their dread “climate change”?

A: China is alreay communist.

I believe that China also is a sponsor of the Davos meeting.

Notice how “young people” who apparently have no intelligence or marketable skills are able to find sugar daddys to fly them all over the world to hold up pre-made signs at riots and “talk” to real adults at these Marxist/Communistic conferences?

One biologist wrote a book with the thesis that we may be entering the sixth mass genesis. “Come back in a million years and we might be looking at several million new species whose existence can be attributed to humans.”

Somehow, the author was interviewed by Vox back in 2017..

Darn those cave men and their giant SUVs!

Davos — People accidentally on top in the system they found themselves in, terrified of any events that might disrupt their cushy ride.

Q — What do Bears do when they realize the Salmon Run they feed at depends on many things?

A — Demand that the Salmon make sure nothing changes that might interrupt their feast.

They’re terrified of Change because they’ve never had to adapt and overcome, never functioned outside a system they were destined and ordained, dare I say predestined and pre-ordained to win. They’re also not much for Hope when it’s among the proles, but that’s another rant.

Davos — A place where people accidentally on top of a system gather, terrified of anything that might disturb their gathering there.

Q — What do Bears do when they realize their Salmon Run feed depends on many things?

A — Demand that the Salmon make sure nothing changes.

Change bugs them because they’ve never had to adapt and overcome; just found themselves inside a game they were destined, dare I say ordained to win. They’re terrified when they realize they’re trapped in a world they never made.

They’re also not much for Hope, for themselves or especially the proles, but that’s another rant.

Well, now that The ‘Rona Spasm is dying down, I suppose The Crisis Farmers will go back to provisioning their Mott-and-Bailey arguments, sloppy pseudo-science, and conflated claims into The Climate (OMG!)

So far The War in Ukraine hasn’t generated enough perma-panic to suffice.

I wonder what they’ll come up with next? Martians, maybe?