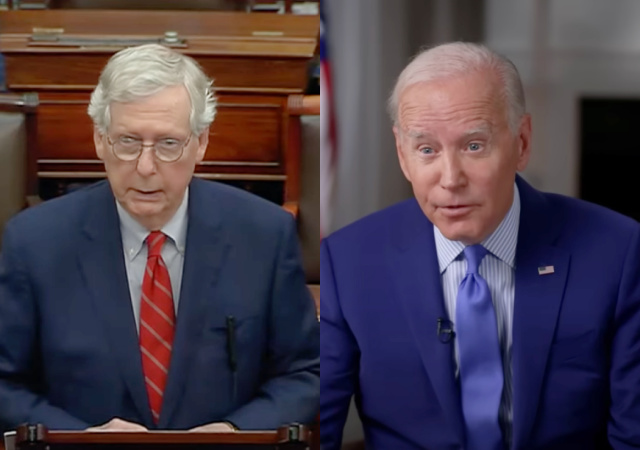 “On Wednesday, January 4, the President will travel to Covington, Kentucky,” according to an advisory from the White House. “The President will deliver remarks on how his economic plan is rebuilding our infrastructure, creating good-paying jobs that don’t require a four-year degree, and revitalizing communities left behind.”

The president’s trip appeared tied to a recent announcement by Kentucky and Ohio that they will receive more than $1.63 billion in federal grants to help build a new Ohio River bridge near Cincinnati and improve the existing overloaded span there, a heavily used freight route linking the Midwest and the South.

Congestion at the Brent Spence Bridge on Interstates 75 and 71 has for years been a frustrating bottleneck on a key shipping corridor and a symbol of the nation’s growing infrastructure needs. Officials say the bridge was built in the 1960s to carry around 80,000 vehicles a day but has seen double that traffic load on its narrow lanes, leading the Federal Highway Administration to declare it functionally obsolete.

The planned project covers about 8 miles (12 kilometers) and includes improvements to the bridge and some connecting roads and construction of a companion span nearby. Both states coordinated to request funding under the nearly $1 trillion bipartisan infrastructure deal signed in 2021 by Biden, who had highlighted the project as the legislation moved through Congress.

McConnell said the companion bridge “will be one of the bill’s crowning accomplishments.”

Why am I paying for a new bridge in Ohio and Kentucky? Why can’t those states pay for their own bridge? I’m never going to use it.

19 Republican senators and 13 Republican representatives voted for the bill.

Bi-PaRtIsAn SuPpOrT, ya see, is, uh, listen son, uh, bi-partisan for mo’ money, so bi-partisan infrastructure with all those shovels because bi-partisan jobs, then we can bi-partisan congress….

Excuse me! Excuse me, Senator. If ya’ll can simply print money at will, why do I have to pay taxes??

A trillion here, a trillion there….soon, we will be talking real money….

“I-I-I know what you’re gonna say, son. When two halves are gone there’s nuthin left – and you’re right. It’s a little ol’ worm who wasn’t there. Two nuthins is nuthin’. That”s mathematics son. You can argue with me but you can’t argue with the figures. Two half nuthins is a whole nuthin’.” – Foghorn Leghorn.

My favorite cartoon character ever!

I’ve been across that bridge and it’s scary, especially in heavy, fast traffic. That said, don’t expect people hundreds or thousands of miles away to enjoy paying for this project.
.

That bridge is nothing compared to Bridge City, Tx bridge

You have to drive it experience it, a worlds wonder
They “secretly built WW2 monster ships in the back swamps , hidden by gators and cypress trees, but in order to get the ships out they built this bridge that is a stairwell to heaven but unfortunately suicides go there to jump, all the time

My daughter was a principal at the MS amd had to drive that everyday, I literally couldn’t do it but twice..

Bitch taking a little victory lap after selling out. Again.

Are we looking at the next Democrat nominee for 2024?

He may as well be.

McConnell has no aspiration to be president. He has more power right where he is, and he knows it.

He obviously doesn’t even have the ambition to be Senate Majority Leader again given the way he sabotaged Republican efforts to win that majority of late.

He purposely squandered his opportunities to be responsive to Republican voters in the years he actually held the gig and actively avoided being put in that position again. He obviously decided he doesn’t need character and integrity to accomplish whatever his personal goals in DC are.

The two most hated men in America, getting together like lovers and playing kissy kissy.

No need to hide it when the Globalists have all of the MSM in their pockets.

Two more worthless individuals you will never come across.

Nothing to see here, just Bitch McConnell publicly boosting the most unpopular President in decades.

And this decrepit RINO scum actually had the gall to claim it was ‘candidate quality’ that was at fault for not winning the Senate back.

Yeah it’s a real mystery how conservatives didn’t show up to put this backstabbing RINO trash back in as Senate ‘leader’.

Why are we tolerating him leading the GOP in the Senate? Anyone?

Torquemada Spooner: Sort them out and let God kill them all.

Can this mofo rub it in any harder?

Yes he can, and you can bet that he will as they try to drive anyone to the right of Trotsky out of the Republican Party. What is ironic is that those on the right are already leaving, kind of like the Whig Party disintegrated between 1856 and 1860 as everybody left for the then-new Republican Party because the Whigs no longer stood for anything.

Typical response from somebody with absolutely no argument.

You can’t actually refute that this is a HORRIBLE look for McConnell, so you whine about the language we use to call him all.

And we’ve all seen your liberal BS and the quality of your comments. You and anybody that you would recommend this site to will not be missed.

What? Are you offended by “mofo”? Very confusing comment here, JR.

No one forces you to read anything posted here darling. Be an adult, walk on by.

IN.
He’s rubbing it IN.
Whole different thing.
Ask Jeff Toobin the difference.

Less than $2 billion? Sure why not it’s only money. I have given up on spending restraint for the federal govt. May as well get something for middle America on the road to financial collapse and govt insolvency.

To be honest, McConnell and the GOPe are merely offering public subservience to their Democrat masters.

All the revelations from the past decade regarding Deep State subversion/sabotage against President Trump; plus, the media lapdogs’/lackeys’/prostitutes’ perennial parroting and promotion of the Dumb-o-crat Party line/narrative and vilification of GOP/conservatives; plus, the FBI’s brazen and unabashed censorship/suppression antics accomplished with the gleeful connivance and cooperation of Silicon Valley; plus, our inability to ensure speedy, transparent and reliable election tabulation results, have me demoralized as hell.

From a tactical standpoint, given all of the aforementioned forces aligned against Republicans/conservatives, I question whether a GOP candidate for President — no matter how appealing and deserving — can ever win the White House, again. That’s my state of mind, right now. We’re up against a bunch of lawless, duplicitous and greasy snakes who have no qualms about breaking laws and using whatever tactics are at their disposal, to claim and maintain power.

Pray for a meteor…

Ford stopped making those decades ago.

Don’t pray that hard for it but I will tell you, it was an unbelievable mind blowing series and you just have to watch it, everyone

Why does a bridge cost 1.6 billion dollars? The new connecting roads are a rounding error at million dollars or so a lane mile.

Because now there are TWO big guys and they EACH want 10%.

There’s gotta be a reason; there’s always a reason.

Is it ungenerous of me to suppose that McConnell is doing this to ensure he gets his promised rake-off, unlike, say, the college debtor voters purchased for relief they’re never gonna get?