Complaint: “Each of the defendant medical schools and universities, along with nearly every medical school and university in the United States, discriminates on account of race and sex when admitting students by giving discriminatory preferences to females and non-Asian minorities, and by discriminating against whites, Asians, and men.” 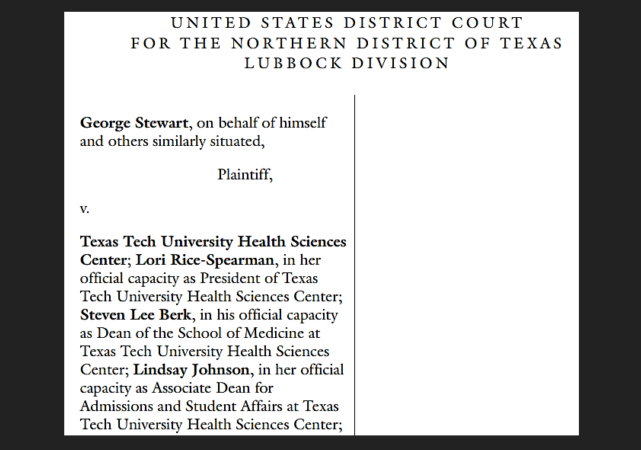 The Supreme Court is considering the overall legality or not of affirmative action in higher education, in cases against Harvard and UNC.

In connection with those cases, Texas lawyer Jonathan Mitchell, who was the author of the Texas abortion law that survived Supreme Court scrutiny pre-Dobbs, submitted an Amicus Brief on behalf of America First Legal Foundation* arguing that the Supreme Court did not need to consider the constitutionality of affirmative action, because racial discrimination is prohibited also by statute:

The language of Title VI makes no allowance for racial considerations in university admissions. It prohibits all forms of racial discrimination at universities that accept federal funds, with no exceptions for “compelling interests,” “diversity,” or “strict scrutiny.” Harvard is indisputably violating this statutory command by using racial considerations in its undergraduate admissions. And the Court must enforce the statute as written and demand that Harvard stop using racial preferences or forgo federal funds.

It is not necessary for this Court to resolve the more difficult questions surrounding the constitutionality of affirmative action under the Equal Protection Clause….

Mitchell and America First Legal have now filed a class action lawsuit today in the Northern District of Texas based upon just such a statutory argument, in the case of Steward v. Texas Tech, et al., challenging affirmative action at medical schools in Texas. From the Complaint:

33. Each of the defendant medical schools and universities, along with nearly every medical school and university in the United States,1 discriminates on account of race and sex when admitting students by giving discriminatory preferences to females and non-Asian minorities, and by discriminating against whites, Asians, and men. This practice, popularly known as “affirmative action,” allows applicants with inferior academic credentials to obtain admission at the expense of rejected candidates with better
academic credentials.
34. These race and sex preferences are illegal under the clear and unambiguous text of Title VI and Title IX, which prohibit all forms of race and sex discrimination at medical schools and universities that receive federal funds and make no exception for diversity-based affirmative-action programs.
35. They also violate 42 U.S.C. § 1981, which prohibits racial discrimination in contracting and makes no exception for diversity-based affirmative-action programs…

48. The data demonstrate that each of the defendant medical schools is providing admissions preferences to female, black, and Hispanic applicants while unlawfully discriminating against whites, Asians, and men in admissions decisions.
49. In addition to these data, the John Sealy School of Medicine at the University of Texas Medical Branch at Galveston openly admits that it gives admissions preferences to black and Hispanic applicants….

60. Each of the defendants is violating Title VI and Title IX by discriminating in favor of female, black, and Hispanic applicants for admission and against whites, Asians, and men.
61. Each of the six medical schools to which Mr. Stewart intends to apply is a “program or activity” that “receives Federal financial assistance” within the meaning of Title VI and Title IX.
62. Mr. Stewart therefore seeks declaratory and injunctive relief that prohibits the defendants from considering or discriminating on account of race and sex in any way in student admissions, and that compels the defendants to select applicants for admission in a color-blind and sex-neutral manner.

The Complaint does include an Equal Protection claim as well, but the case is not dependent on it:

78. As public institutions, the six medical schools to which Mr. Stewart intends to apply are subject to the commands of the Equal Protection Clause, which prohibits state universities or their components from denying to any person the equal protection of the laws….

81. Even if the medical schools’ affirmative-action programs were consistent with Grutter and Fisher, they would remain illegal under the text of Title VI, Title IX, and 42 U.S.C. § 1981, which categorically prohibit race and sex discrimination with no caveats or allowances for “compelling interests, “student body diversity,” or anything else.

Today, the America First Legal Foundation’s (AFL) Center for Legal Equality filed a class-action lawsuit against six Texas medical schools for illegally using race and sex preferences in their admissions – a practice that violates Title VI, Title IX, and the Equal Protection Clause of the Fourteenth Amendment. Whites, Asians, and males bear the brunt of this egregious policy granting applicants with lesser academic credentials medical school admission over academically more qualified candidates on the basis of race and sex.

AFL’s client, a white male, applied unsuccessfully for admission to six medical schools in Texas in the 2021-2022 cycle. He then filed an open records request and obtained the race, sex, grade-point average, and MCAT score data for every applicant. The data revealed:

For too long, universities and medical schools across America have been co-opted by woke ideologues pushing the divisive “equity” agenda while never facing lawsuits for their illegal conduct and never facing repercussions from the U.S. Department of Education, which has turned a blind eye. Yet all American citizens are harmed when medical schools illegally discriminate based on race, national origin, and sex – our nation’s future doctors should be chosen on merit, not on immutable characteristics. Racial discrimination is illegal and immoral. America First Legal is proud to lead the charge in the fight to protect every American citizen from unlawful discrimination.

*Note: Mitchell and America First Legal represented me in my lawsuit against the NY State Health Commissioner.

Oh yes they do, almost 80% of the medical residents I worked with were female, black and very few white men…. Like they fell off the face of the earth

“Like they fell off the face of the earth.”

I was wondering where they all went.

Um, no. About 50% of medical students are women. About 20% are URMs (under-represented minorities). That’s per AMCAS data.

But what are the demographic percentages of the actual applications? I bet they are very different from what the AMCAS says.

The face of healthcare within 10 years … won’t look like me.

I remember the shock of learning what Brown v. Board of Education was all about. I saw the footnote that suggested that one solution to segregation might be short (defined as 15 minute) bus rides…. that got turned into an hour-and-a-half one way punishment for kids with uppity parents. I remember the fights over busing, allegedly based on a footnote….

It is time for the SCOTUS to recognize that their carefully-worded theoretical opinions can and will be “twisted by knaves to make a trap for fools.”

They should decide this case based on the clearly-expressed intent of Congress, rather than letting their clerks play with the Equal Protection Clause.

I was almost bused downtown to what was then an all-black high school, but in 1972 SCOTUS saved the day with the Milliken decision. I was academically at the top of my good suburban high school and would have learned nothing academic in an inner city high school. Maybe I would have been told to waste my time teaching others.

So many people know of Brown v. Board, but Milliken is ignored by the mockingbird press. It overrides a lot of Brown and restricts busing requirements to within school districts. You can’t be ordered to bus beyond a school district. So if you have a big urban district, busing can imply long bus rides. If it’s a small or racially homogeneous district, busing would not be applicable.

“twisted by knaves to make a trap for fools.”

– Lawyers start with an outcome, then look for stuff somebody said they can twist to make it sound so.

– Engineers start with an outcome, then look for stuff as it is, they can use to make it real.

– Scientists start with known ignorance, the look for stuff that happens to help figure out what is so in the really real world.

They are all intentional, but different *kiinds* of intention, realized different ways. Plenty of people called one thing do the other — that makes them confused, or cons, not correct. If you want to know what’s really up, look at what they are doing, like The Science Gnome, being a lawyerly advocate:

— Advocates start with something they want you to believe, then look for stuff to say, to make you think it’s so.

‘Twisted by knaves to make a trap for fools.”

The Supremes need to figure out that the entire Federal judiciary is ultimately responsible to only them; and tell their minions “As a judge, doing judge things, the law is as we have declared it. You wanna decide otherwise or influence policy, go do politics.”

This is playing out again, some more, in NY State, this time around The Accidental Proconsul’s gun laws. One can’t wait for the outright natural gas bans to become judicially ripe.

I do wonder about corralling or removing judges who insist on doing not judge things; corralling them legislatively is a bit fraught, one wonders what counts as “malfeasance” for purposes of impeachment. BUT, can the superior authoritah — er — can them? “You exist as a creation of we, The Supremes. You are free to do as you like as a citizen. On the federal bench, our word once given is law. Since you can;’t seem to figure that out, you’re out.”

A Legal Insurrectionist can dream.

Whatever happened to Bakke v Regents of Univ CA? I thought that ended affirnative action decisions in med school admissions.

The court wrote a decision that twisted and turned and writhed in order to not quite repeal discrimination.

On the contrary, Bakke specifically allowed “affirmative action”, and only banned outright quotas. But it permitted “targets”. It said you can’t just make a rule that 16 out of every 100 seats are reserved for minorities; but you can put a thumb on the scales, making it harder for majorities to get in and easier for minorities, so that you will automatically achieve the target percentage. Grutter upheld that decision. Now it looks like it will finally be overturned, only 45 years too late.

I will be beyond ashamed if my life is someday saved by a cis-white male doctor.