“Senators’ children and grandchildren should not be subjected to this insanity so Kamala can pretend to care about fighting coronavirus. At what point does the madness end?” 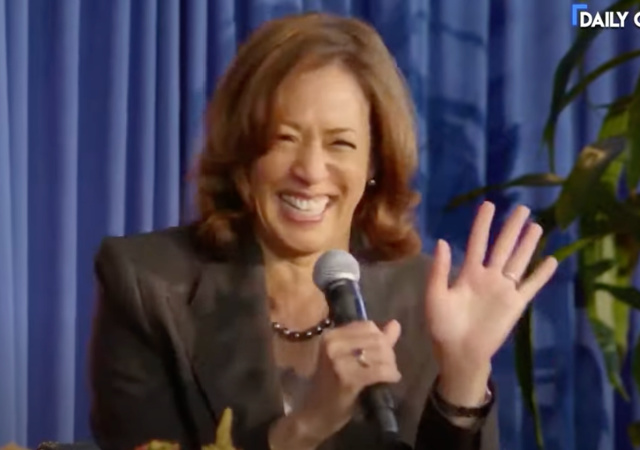 Vice President Kamala Harris is demanding senators and guests over the age of two have a negative COVID test to take a photo with her after the swearing-in ceremony on Tuesday:

The requirements straight out of 2021 were outlined in an email from the veep’s office to the Senate Sergeant-at-Arms — who, in turn, blasted it out to individual Senate offices.

“We look forward to welcoming your Senator on January 3, 2023, to the ceremonial reenactment for incoming and newly re-elected Senators in the Old Senate Chamber,” wrote Grisella Martinez, Harris’ director of legislative affairs. “As you are aware, White House COVID-19 protocols require that anyone over two-years of age who will interact with the Vice President take a medically-administered antigen test within 24 hours prior to interaction, and receive a negative result. This policy applies regardless of vaccination status.”

Martinez went on to say that prospective participants in the ceremony can get tested Tuesday morning in a Senate office building or send results of a “medically administered” test to a White House email address before 9 a.m. The tests must be taken within the 24-hour period from 1 p.m. Tuesday to 1 p.m. Wednesday.

Yes, Harris is demanding you test your toddler.

Harris will swear in the 35 elected senators at 12:00 PM ET on Tuesday.

The actual ceremony happens in small groups. Senators can do it again one-on-one with Harris and then take a photo. Their family remembers usually join in the photo.

“This many years into the pandemic, especially as the Biden administration is in court currently trying to argue the pandemic is over and it should be allowed to lift Title 42 authority at the border, this is beyond ridiculous,” one source close to a senator told Breitbart News. “Senators’ children and grandchildren should not be subjected to this insanity so Kamala can pretend to care about fighting coronavirus. At what point does the madness end?”

Some senators, sources familiar with the matter said, are apparently so upset they might not participate in the photo ceremony with Harris and may instead snub the vice president on the first day of the new Congress.

This video has nothing to do with the story but is hilarious.

A good excuse to skip this ceremony.

Democrats and RINOs will comply.

It ends when people decide to end it and show power hungry politicians the people hold the power.

I’ve said this since the first day of masking March, 2020. This stupid masking ends when people quit behaving stupidly. Mass hysteria is a real thing and sadly, Americans were willing subjects.

This has been forever. The press brings up new things to frighten the public. Then again, the public is gullible. Some even committed suicide during a radio drama with acting that was hokey even by the standards of the day. War of the World.

She just does what she’s told.

if that were true, they could tell her to read the teleprompter.

Either the Covid crisis phase used to justify all sorts of restrictions and impose burdens is active or it is inactive. The WH must choose which they wish to advocate for in an all or none manner.

The “emergency” is set to expire on the 15th of this month. I’ll give 100 to 1 odds it is extended another 3 months. Any takers?

This is junk science writ large. Note the absence of being tested for monkey pox

Junk people are running our country. But Kevin! McCarthy will save the day.

It’s only fair that she likewise provides a negative gonorrhea test.

Um, they’re not getting that close to her…

The definition of a venereal disease is one that’s so hard to catch you have to be intimate with a carrier to get it.

There are always exceptions. Her trademark cackle could certainly propel a potent airborne dose. Her too familiar grasp of that microphone would make me hesitant to shake her hand.

God knows what’s lurking in her innards after all her slutiness.

What’s the problem with this? If she’s worried about catching the Wuhan flu she’s entitled to protect herself. She has no duty to pose for photos with senators and their families, and I don’t understand why any Republican senators would want her in their family photos. Imagine looking at that photo in 10 or 20 years. “Grandpa, who is that woman posing with you?” “Well, she was a famous courtesan, and it was considered an honor to have your picture taken with her”. “Courtesan — is that a fancy word for whore?”

Family once demanded that of my wife and I before helping unload a small trailer into our new house after we closed. We’d come 2400 miles cross country in December with the promise of a “family support” when we arrived. That morning, several phone calls pressured and threatened us to be tested with negative results, even suggesting we lie to the local health czar about having symptoms so we could get the free test. Absent symptoms, the czar would not test us.

About the 5th such call, wifey was in tears and I asked her to hold the phone out where everyone could hear me. “If you aren’t here in 10 minutes, I’ll drag the trailer back to Seattle and list the house for sale”.

After a morning of arguing with us they said “OK. See you in 10”. Sadly, it hasn’t gotten any better and I’ll be making good on my threat in the spring.

Covid just afforded an opportunity for tyrants to be tyrants. Even family.

If the VP wants protection from Covid, let her wear a hazmat suit to the swearing in and not put everyone else through a hassle on what for them should be a joyous day, about them. Harris is narcissistic to make such a request.

Do you really want to move back to Seattle?

I assume that anyone who, for some reason, wants her in their family picture, wouldn’t want her there in a hazmat suit. So her wearing one wouldn’t solve the problem. I think she’s in the right on this one. She’s afraid, and she’s entitled to take whatever measures will make her feel safer, however irrational they may be. She can’t let that interfere with her constitutional duties, but taking pictures is not one, so she can be as irrational as she likes.

How about posing with a look-a-like cardboard cutout?

Shoot, if they’re offering that, make my cutout Tucker, not Kamala.

How can we tell the difference?

If Harris is “afraid,” then I’m a one-eyed, one-horned flying purple people eater.

“Covid just afforded an opportunity for tyrants to be tyrants. Even family.”

Only covid? Why not also Hep B, small pox, turburculosis, flu, or a host of other far more deadly communicable diseases?

Because it’s all clown world.

I wish we had a covert monkeywrencher among her staff who could have swapped the words ‘negative COVID test” with “US birth certificate or naturalization documents.”

Joe is also planning to attend and is requiring sniff tests for all females between the age of 2 and 30 that he will personally administer.

Last news I read was that there was a new variant (XBB.1.5) burning its way through New England that laughs at both the vax and natural immunity from past infections, and has a much higher hospitalization rate for people 70+. The consequences of Fauci’s disobedient hubris are far from played out.