The Circuit Court of the 21st Judicial Circuit of Kankakee County found the provision unconstitutional “after states attorneys in 65 Illinois counties challenged the new law.” 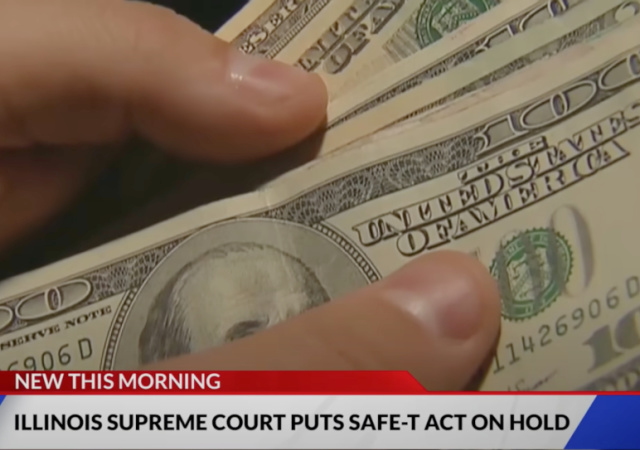 The Illinois Supreme Court temporarily suspended the Pretrial Fairness Act in the SAFE-T Act, which would eliminate cash bail.

“The emergency motion for supervisory order is allowed,” wrote the court. “In order to maintain consistent pretrial procedures throughout Illinois, the effective date of the Pretrial Fairness Act (Public Act 101-652 and Public Act 102-1104) is stayed during the pendency of the appeal in No. 129248 and until further order of this Court.”

The Circuit Court of the 21st Judicial Circuit of Kankakee County found the provision unconstitutional “after states attorneys in 65 Illinois counties challenged the new law.”

Because, as the Illinois Supreme Court has determined, the administration of the justice system is an inherent power of the courts upon which the legislature may not infringe and the setting of bail falls within that administrative power, the appropriateness of bail rests with the authority of the court and may not be determined by legislative fiat. Therefore, the court finds that Public Acts 101- 652 and 102-1104 as they relate only to the pretrial release provisions do violate this separation of powers principle underlying our system of governance by depriving the courts of their inherent authority to administer and control their courtrooms and to set bail. Elrod, supra.

Kane and Dupage county’s state’s attorneys asked the Illinois Supreme Court to delay the provision “amid confusion over how a divided state would work.”

The Illinois Supreme Court will hear an appeal from Attorney General Kwame Raoul but did not give a date:

Also on Friday, Raoul appealed Cunnington’s decision to the Supreme Court. He said some court motions asked for his office to be prohibited from enforcing any provision of the SAFE-T Act — and not just the pretrial ones.

“Many of these provisions have been in effect for more than a year; however, my office received less than one hour’s notice of hearings in some counties and no notice at all in others,” he said in the statement. “Throughout the day, we continued to learn of plaintiffs having obtained (temporary restraining orders) without giving our office notice or providing copies of the complaints or TRO motions.”

“To say that this is an abuse of the judicial process is an understatement,” Raoul said.

Sounds like the state water treatment plants may have run out of Deludin.

This seems to indicate a stay precluding enforcement in all Counties and not just the 65 Counties who sued. If I remember correctly Illinois has slightly over a hundred Counties.

The downside is the removal of a compare and contrast opportunity between the different Counties going forward. Even short term a clear difference in outcomes from the policy divergence would be easily observed.

That would be nice if we were dealing with mice, but those are real people being robbed, assaulted and murdered. Not a good environment for observation and experimentation.

It would be nice to see the people who support weirdo policies be subjected to the consequences of those policies while excluding the rest of the State who opposed them. I am completely out of sympathy for people who choose destructive policies. Pain is a.very good teacher. Sometimes that is the only way people learn, personal experience with the foreseeable consequences of their bad decisions.

Looks like not every judge is ready to unleash hell on the state.

Hopefully the Supreme Court overrules the lower courts and pushes the Safe-T Act out.

The country needs a sharp lesson in what happens when you let criminals have a free hand. Best way to do that is to let one state set itself on fire. Thank you Illinois.

Don’t delude yourself. This is about a power struggle between two greedy factions…nothing more.

The Illinois Supreme Court issued a last minute stay for all counties in Illinois, not just those who sued. This applies only to the elimination of cash bail. The rest of the Act was passed. Some of it was good, but there was a lot in there that makes policing much more difficult. The corruption runs very deep in Chicago, Cook County and some other blue parts of the state. The cash bail part, when it is finally pushed through, will take it’s biggest toll on the law abiding poor citizens.

What is this love affair with criminals?

Wasn’t Illinois in the top 5 states people are fleeing?

I believe the logic behind this is to drive voting demographics. Voters who are losing are leaving and the only people remaining are either compliant or criminals.

As I write this we have an offer pending on a house in NE TN that expires this evening. Demand remains hot- though there’s fewer buyers who can afford to go cash OR who have the official blessing from their employer to be “virtual” and can afford to buy in the current interest rates.

Geeze- we’re going to get murdered selling our current house.

“What is this love affair with criminals?”
Democrats know who their voters are, what they are and where they are and intend to keep them close.

It’s no coincidence that Democrat activist groups are fighting to return the right to vote to felons actively serving prison sentences.
They look out for their own.

Well, we are talking about a state where 4 of the last 7 Governors have gone to prison.

Let me know how it goes. I’m in Johnson City. If you come here, maybe we can grab a coffee or something if you want. We’ll figure out a way to exchange contact information.

Absolutely brother. We’ll be on the JC outskirts in Gray… about 2 miles from D Boone HS. Hanging tight on the offer status. Some back and forth this afternoon and very close in the negotiation.

If this one falls through we’ll probably wait till spring or summer to try again.

I live in Illinois, one home in suburban Chicago, one downstate. I’ve had my ear to the ground since this bill was proposed last spring. I’m in a pretty diverse, mixed crowd.

NO ONE I know supports this bill. Men, women, black, white, Asian, no one. Everyone points out that the elimination of cash bail puts bad guys back on the street right away. It tells the cops not to bother.

And my diverse crowd? A fair number are Democrats, and passing this bill in October didn’t change their vote in November. Guess they’re going to get it gooder and harder.