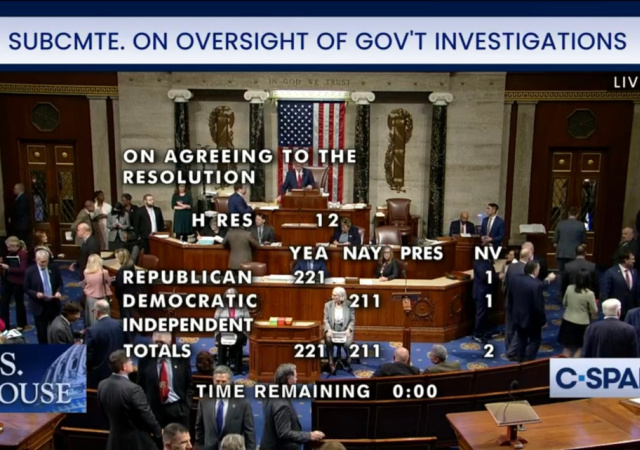 Today the 118th Congress voted and adopted H. Res. 12 in a party-line vote of 221-211. The Resolution creates a Select Subcommittee on the Weaponization of the Federal Government as a Judiciary subcommittee.

The House adopted H. Res. 12 – Establishing a Select Subcommittee on the Weaponization of the Federal Government as a select investigative subcommittee of the Committee on the Judiciary by a vote of 221-211. https://t.co/BGcGBymb4q

It’s reported that the subcommittee was part of the concessions to help Kevin McCarthy become Speaker of the House.

The Hill explains why it’s a victory for the House’s Freedom Caucus:

The subcommittee, part of the House Judiciary Committee, is expected to be chaired by the full panel’s chair, Rep. Jim Jordan (R-Ohio).

Such a move would give broad authority to an ally of Donald Trump who has railed against current and prior investigations of the former president.

“We don’t want to go after anyone, we just want it to stop. And we want to respect the First Amendment to the Constitution that the greatest country in the world has. That’s what this committee is all about, and that’s what we’re gonna focus on, that’s what we are going to do,” he later added.

Heads are exploding on the left:

Rep. Jim McGovern on the proposed subcommittee to investigate weaponization of the federal government:

"This committee is deranged. It's a bad idea … it will be in the same category as the Joseph McCarthy Committee on Un-American Activities." pic.twitter.com/B6XYnnS2lY

Rep. August Pfluger explained on the floor why the subcommittee is so essential, “Americans are fed up with the weaponization of the federal government against our own citizens.”

The subcommittee would have extraordinary power to investigate any part of the Justice Department and FBI for perceived wrongdoing against Americans:

The panel will have the authority to investigate how the federal government and private companies collect and analyze information on Americans, along with “ongoing criminal investigations” and civil liberties issues, according to the text of the resolution. The mandate could set up new fights with the Justice Department and national security agencies over sensitive records and probes — including those involving former President Donald Trump.

The panel would also get access to highly classified information typically only shared with the House Intelligence Committee.

Hopefully, we can get to the bottom of some major reports over the last few years of abuse. (Twitterfiles, Hunter Biden, and so much more)

A party line vote. Not a single Democrat willing to admit any possibility of FBI/DOJ bias.
It’s now undeniable: these people are no longer our countrymen.

Many prominent d/prog are up to their elbows in facilitating this, some personally engaged in it themselves in parallel to the Executive Branch. They ain’t dumb enough to empower their political opponents, unlike a certain Senate Minority leader.

I suspect there is a good deal of dirty laundry out there, far more than the surface level released by Twitter files to date. For starters everything we find going down at Twitter was probably replicated at FB and Google among others. The purchase by Musk has allowed a window into these practices, which is one reason the purchase was opposed and Musk is vilified.

And while they’re doing this, Bitch McConnell, fresh off his vomit-inducing victory lap with Biden about selling us all out to the tune of nearly $2 TRILLION, is still bloviating about how he needs to ‘reach across the aisle’ and ‘work with the Biden administration to pass legislation’.

Because their ‘leadership’ isn’t populated with traitors that sell them out at the drop of a hat.

Why would they admit to that possibility.The DOJ/FBI bias swings their favor so they certainly don’t want that to end. So we get a party line vote with the democrats all voting “Nay”. Tells you a lot about the democrats. Unfortunately, it’s nothing good.

Didn’t the democrats always say if you’ve done nothing illegal then you shouldn’t worry about investigations?

Yes but that was before! 😂😂

I’m glad, though, that this resolution gives Jim McGovern heartburn. A stroke would not be too much to hope for, either.

If they’re serious, this will be the busiest committee they’ve ever formed.

It would be a real shame if this Committee accidentally published the social security numbers of the witnesses or their home addresses.

Fortunately, that could NEVER actually happen.

Well, he’s right. Congressional oversight of the administrative apparatus could make them the targets — we recall CIA physically spying on Congress not long ago, right?