In 1996, Hamas carried out a series of suicide bus bombings, killing 60 Israeli commuters. 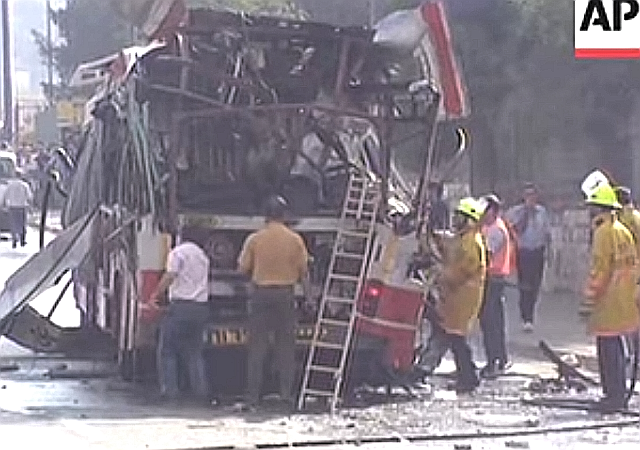 The Gaza-based Islamic terrorist group Hamas has released a book by one of its leading terror masterminds who carried out a wave of suicide bombings inside Israel.

The author of the book, Hassan Salameh, who is serving multiple life sentences in an Israeli prison, brags about how he and his terrorist accomplices aimed at killing many Israeli commuters by blowing up buses.

Between February and March 1996, Hamas—an offshoot of the global Islamic Muslim Brotherhood movement—carried out a series of suicide bus bombings, killing at least 60 Israelis. These bombings were a turning point for the Islamist group, which later emerged as the main rival to the Yasser Arafat-led Palestine Liberation Organization (PLO) terrorist organization.

The armed wing of Hamas on Thursday published a book written by one of its commanders who was responsible for a series of suicide bombing attacks against Israel.

The book, The Buses are Burning, was written by Hassan Salameh, who is serving 46 consecutive life sentences and another 30 years in Israeli prison for directing three mass-casualty attacks in Israel.

Salameh, who was born in Khan Yunis in the Gaza Strip, was arrested by Israeli security forces in 1996 in Hebron.

The title of the book refers to the buses that were targeted by suicide bombers.

In the book, Salameh relates how he and his friends planned and carried out several terror attacks.

The book launch was held in Khan Yunis to mark the 27th anniversary of the assassination of Hamas arch terrorist and chief bomb maker Yahya Ayyash, who was killed in a mobile phone explosion in the Gaza Strip in 1996.

After the assassination, Hamas entrusted Salameh with the task of carrying out terrorist attacks in Israel to avenge the killing of Ayyash, nicknamed “The Engineer” because of his expertise in manufacturing bombs.

Thursday’s event, organized by Izaddin al-Qassam, the military wing of Hamas, was attended by hundreds of Palestinians, including senior officials of the Gaza-based terror group and former security prisoners held in Israeli prisons.

Since 2007, Hamas has exerted total control over the Gaza Strip, purging the territory of rival Palestinian groups and muzzling any opposition to its rule.

The jihadi group has turned Gaza into a terrorist stronghold, setting up weapons factories, rocket launching sites, and miles of tunnel networks to move fighters and weaponry. Hamas, aided by allied terrorist groups such as the Iran-sponsored Palestinian Islamic Jihad (PIJ), regularly fires rockets at Israeli towns and cities.

The Islamist group indoctrinates Gaza children at a young age, organizing terrorist summer camps for kids as young as nine. “For over ten years, summer camps for children and teens held in Hamas-controlled Gaza have served as a framework for inculcating an extremist ideology that glorifies jihad, terror and armed struggle against Israel,” the DC-based media watchdog MEMRI reported in 2021. Each year, Hamas enlists tens of thousands of Arab kids for its jihad camps, Israeli media reports reveal.

Noting Hamas’ indoctrination of Gazan youth, a report by the Israel Defense Forces noted: “Hamas doesn’t just celebrate violence—its leaders actively incite violence against Israeli civilians. It’s what they teach their kids in schools. It’s what they show on TV.”

“Thursday’s event, organized by Izaddin al-Qassam, the military wing of Hamas, was attended by hundreds of Palestinians, including senior officials of the Gaza-based terror group and former security prisoners held in Israeli prisons.”

When they tell you who they are; believe them.

When they show you who they are; believe them harder.

When they tell you what they showed you of who they are; stop pretending they’re anything but.

REMF.
Most such books are much, much shorter.