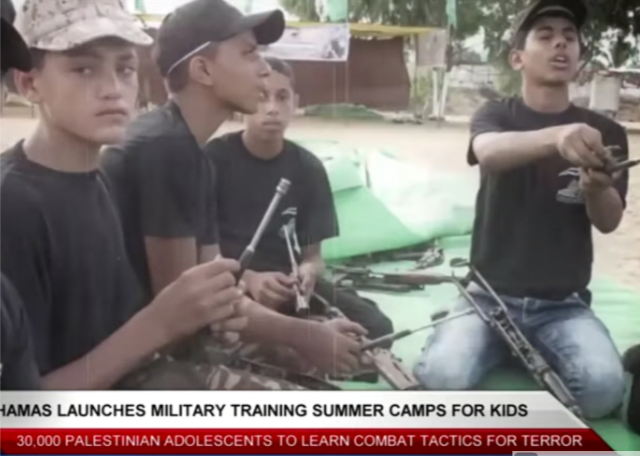 A month after staging relentless rocket attacks on Israeli towns and cities, Gaza-based terrorist groups are indoctrinating ten of thousands of Palestinian kids in the ideology of jihad warfare and recruiting the next generation of fighters.

Hamas, the Islamist terror group that controls Gaza, enlisted thousands of children for this year’s jihad “summer camps.” Boys as young as nine will be exposed to terrorist propaganda and trained to attack Israeli civilians and kidnap soldiers, media reports show.

According to the DC-based Middle East Media Research Institute (MEMRI), mosques across Gaza were being used as terrorist recruiting centers. Hamas enlisted more than 50,000 children for this year’s summer camps, the Jerusalem Post confirmed.

An advertisement for Hamas' summer camp for children and teenagers at al-Tuffa Martyrs Mosque. #Gaza pic.twitter.com/4EHHPq9sP4

The Times of Israel detailed the terrorist training being offered to impressionable kids in this year’s Gaza camps:

The Hamas terror group has launched its annual summer camps for Gaza children featuring military training for the Strip’s young.

At the “Pioneers of Liberation” camp, kids wear Hamas uniforms and undergo various training exercises to prepare them to fight Israel.

This year, campers are also being trained through computer simulations in which they shoot soldiers and policemen at Jerusalem’s Temple Mount and Al-Aqsa Mosque.

Another simulator features an anti-tank missile that kids use to fire on Israeli targets.

The children are indoctrinated in Jihad and hatred for the “Zionist enemy.”

One training drill saw them simulate the kidnapping of an Israeli soldier.

In previous years, children were taught to stab and stone Israeli police in order “to liberate Al-Aqsa,” while instructors lionized those who fall as “martyrs” against the enemy.

While you send your children to normal summer camps, this is the #Hamas terrorist organization's summer camp for children in #Gaza.

This is child abuse, a crime against humanity! pic.twitter.com/MACFniqfQG

The training of children and teenagers isn’t exclusive to Hamas’ military wing. Other militant groups including Palestinian Islamic Jihad hold camps for potential recruits during the summer months. Most notably, Hezbollah established a youth movement over three decades ago called the Imam al-Mahdi Scouts who train children how to use weapons and indoctrinate them into the group’s ideology.

Child at Islamic Jihad Gaza Summer Camp: Hitler Left Some of You Alive to Show Us How Wicked You Are; We Will Tear Your Bodies Apart with Our Rockets; PIJ Official: The Children of Palestine Will Sacrifice Their Blood and Body Parts #Gaza #terrorists #antisemitism pic.twitter.com/vRm8hqleG0

This is not the first time Palestinian terrorists groups are enticing children to join their ranks. MEMRI reported the long-held Palestinian strategy of recruiting young kids in their war of terror against Israel:

For over ten years, summer camps for children and teens held in Hamas-controlled Gaza have served as a framework for inculcating an extremist ideology that glorifies jihad, terror and armed struggle against Israel with the aim of “liberating Palestine from the river to the sea.”

The camps, most of which are operated by Hamas and the Palestinian Islamic Jihad (PIJ), also provide military training, such as practice with knives and firearms (in some cases with live ammunition); hand-to-hand combat; marching and foot drills, obstacle courses and tunnel combat. Campers also stage plays and enact scenes of fighting and capturing Israeli soldiers or firing rockets into Israel. Many activities are themed around the liberation of Palestine, Jerusalem and Al-Aqsa, or deal with commemorating and glorifying terrorists.

So why are the Palestinian terrorist groups getting away with this abhorrent form of child abuse?

Truzman in the Long War Journal makes a valid point: “Until Gaza’s militant groups believe it’s not in their interest to recruit minors into their military wing, it’s highly likely this form of child exploitation will continue indefinitely.”

Following last month’s Gaza conflict in which Palestinian terrorists fired thousands of rockets at Israeli civilians, the U.S. and Western governments have pledged millions of dollar for “reconstruction” aid. Any aid money going to Gaza will likely end up in Hamas’s coffers. The mainstream media railed against Israel for targeting the terrorist infrastructure inside Gaza. The global media were all too willing to peddle Hamas’s narrative and portray Israel as the aggressor.

The same world leaders and the media outlets that lined up to condemn Israel for the use of force as thousands of Palestinian rockets rained down on Israeli civilians, are silent as Islamic terror groups sow the seeds for future conflicts and raise the next generation of terrorists.

How unbrainwashable are these kids? I hate to think the only thing to be done is to kill them in combat.

I don’t think they can be salvaged, none of them. It is interesting how large numbers of people can descend into a collective psychoses, how their whole culture rots.

I think the same, but I have no experience with that level of intentionally warping the youth.

Or these sick people infesting our government:

We’ve got to get real here: the war on now on our own soil, and the enemy is within.

Israel may wake up one day and understand the nature of the enemy.
There is only one answer and that is to level the gaza strip and shove whatever remains into the sea. Kind of like the stated policy of the death merchants know as palestinians.

Not until it first overthrows the dictatorship of its Supreme Court and its “legal advisors”.

No argument from me. I used “may” for a reason.

Just more from the religion of pease,for the the dinosaur media, a wholly owned subsidiary of the Democrat party, to ignore.

Remember the good old days when summer camps taught you how to tie knots and sing campfire songs?

Jordan threw out their trash, now Israel should do the same.