Climate militants occupying German coal town include supporters of Antifa and the Popular Front for the Liberation of Palestine (PFLP) terrorist group. 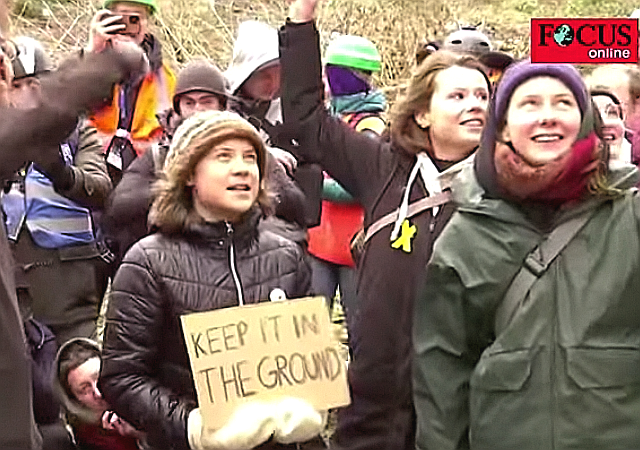 Days after German climate activists attacked police with Molotov cocktails and stones for trying to remove them from an occupied coal mining area, Swedish climate campaigner Greta Thunberg arrived at the scene to show support for their protest.

Violent clashes were reported in an abandoned village near the western German city of Aachen, where more than 1000 climate militants occupied the area to stop further coal mining. As Germans faces a severe energy crisis, largely driven by their government’s “green energy” policies, the country has turned to coal-fired power plants to generate electricity needed to keep homes warm this winter.

While the German government rations gas supplies and households struggle to pay surging energy bills, Thunberg came to show her solidarity with climate squatters who attacked police and illegally occupied a mining town.

The 20-year-old climate celebrity was received with great pomp and fanfare. Climate militants welcomed her with banners, loud chants, and even a brass band—eerily resembling the fanatical German tradition of dark and bygone days.

“Crowds of activists marched on the hamlet of Lützerath in western Germany, waving banners, chanting and accompanied by a brass band, but there were also violent clashes with police,” British newspaper The Guardian reported.

These “banners’ included Antifa flags, as well as the symbols of the terrorist group Popular Front for the Liberation of Palestine (PFLP), photos and videoclips from the scene show.

In her angry speech, the Swedish activist sided with the climate mob and lashed out at the German police and authorities for following the law. “Germany is really embarrassing itself right now,” Thunberg declared at the rally on Saturday.

“This is a betrayal of present and future generations . . . . Germany is one of the biggest polluters in the world and needs to be held accountable,” she said amid roaring applause.

"Germany is really embarrassing itself right now."@GretaThunberg has joined climate activists in Germany who are resisting the demolition of the Luetzerath village for a coal mine expansion. pic.twitter.com/yEmjWtycVP

Thunberg arrived at the scene in a Mitsubishi SUV, the German media noted.

Greta Thunberg criticized the actions of the police during the eviction of the site. “The police violence is outrageous,” Thunberg said. What is happening in Lützerath is “shocking.” (…)

Thunberg’s big performance was over in just 30 minutes. The climate activist climbed into a silver-colored Mitsubishi rental with her backers and vanished.

As Thunberg’s fellow climate zealots carry out violence of the streets, the mainstream media and the globalist elites continue to promote the Swedish activist as some sort of messianic figure.

Thunberg’s veneration has reached creepy dimensions in the West, with a British university paying a hefty sum for a life-size bronze statue of the climate campaigner who made a name for herself by skipping school. “The Hampshire university spent £23,760 on what it claims to be the first life-sized sculpture of the ‘inspirational’ Swedish environmental activist,” the UK newspaper Telegraph reported earlier this month.

I hope you freeze your “lil hinee” off gruesomer G reta

Greta is a child abuse victim

“Climate militants occupying German coal town include supporters of Antifa and the Popular Front for the Liberation of Palestine (PFLP) terrorist group”
So maybe this is a preview of next years Democrat National Convention.

Democrats love records.
Maybe next year they can break the records from their 1969 convention.

Yessir, ’68 would be even better. Those were the days.

If Germany had built nuke plants instead of Windmills they would not have to burn coal and lignite.

If Germany had not killed all those Jews they would be the world’s most advanced nation and one of the world’s greatest powers. But they did and later, feeling guilty about it, imported Muslims to take their place. Now they are the world’s foremost shit hole and rightly so.

Put that statue right next to Saint Floyd

How about next to that monstrocity unveiled in Boston today?

You can’t even see the corn!

You can’t even see his head!

Maybe first time ever agree with Greta. Germany is embarrassing itself but not over climate change but letting these people get away with that.
Can I guess Greta didn’t walk or ride a horse or bicycle to get there?

Good to see she had the time to devote to more political agitation.
It’s not like her dance card was packed.

This girl has never had a thought in her life not pre-approved by her groomers.

Look at her sign. Maybe someone should offer her a speaking platform at the bottom of the shaft. Send her down with some of he admirers. When they step off the elevator pull it back up. Walk away and close the mine.

They enjoy the fruits of energy, but seek to deprive others. They would fly private jets to protests if they could. They know best and are saving the world, so they get to tell everyone what to do!

Require all of them them to spend the winter without any benefit from fossil fuel.

Put her ass in an uninsulated wooden shack with no heat and no way to start a fire. Toss in a bag of rice and a bag of beans. Let her figure out how to melt snow.

Her groomers will tell you she enjoyed the experience.

If this is Germany, what is your sign in English?

I smirk every time I see one of those signs. I REALLY want the symbol to be a silhouette of some kid, finger in mouth in a “d’uhh” pose.

When you see slow children playing it’s most likely a school where they are being groomed to be politicians.

Why give her any publicity at all?

Let her name die on the weathering limb

They need to start running headlines: Greta wants Grandma to freeze to death.

These spoiled brats have no clue what living 2 centuries ago was like, that’s were they want to go

I suspect the plan is for the rest of us to go back two centuries, while they will have “no choice” but to stay modern “because the world needs our guidance” or some such (a replay of the Animal Farm argument “but the pigs need the milk and apples”).

I can only conclude that Greta Tintin Eleonora Ernman Thunberg will always be a depressed person, no matter what amount of extortion she manages to exact through her well-choreographed ‘human-caused’ climate crisis fear mongering.

I’m certain that the “real money” will their best to not let her fail. Just read her Wikipedia writeup.
It
Is
Glorious!
But zero mention to belief in a ‘higher power’.
‘The Theory of Anthropogenic Climate Change’ is her religion.

There is no market for Behind The Greta Door.

Notice that Greta is carrying a sign in English. The last I heard, most people in Germany speak German, so who is her intended audience?

The media. They are the only ones interested in her.

How does she enter all these countries? Does she have a passport?

Stanford should lose its tax exemption for this. They’re going to implement a Gates-like agenda, from the citadel of Stanford, to implement a climate agenda. They’ll have classes in essentially climate activism in their new School of Sustainability. https://www.gsb.stanford.edu/experience/news-history/rethinking-academia-address-climate-change?sf174407276=1

All of these “activists” should volunteer to be the first to do without anything which uses fossil fuels; not just heat and light but everything created from them (e.g. plastic) and anything transported on a fossil-fueled vehicle (good luck getting groceries…).