“Police urge activists not to use their children as shields.” 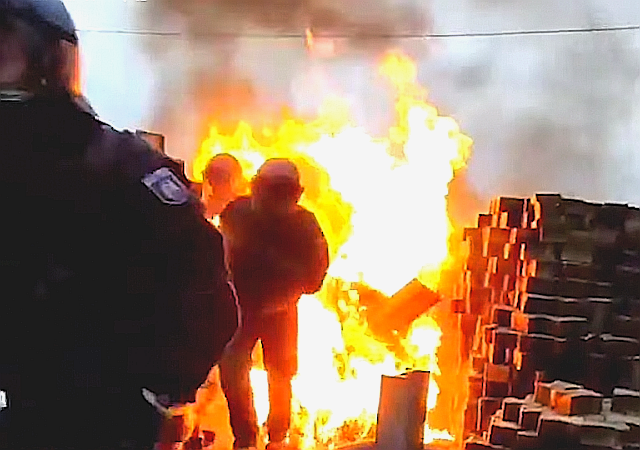 While ordinary Germans struggle to warm their homes amid an unfolding energy crisis this winter, climate activists disrupted coal mining. They clashed with the police near the western German city of Aachen.

Violent clashes occurred as police tried to vacate the abandoned village of Lützerath, which more than 1000 climate activists had occupied to stop the expansion of a local coal mine. As energy demands rise in winter, Germany has turned to coal-fired power plants to produce electricity.

Climate militants “threw stones, firecrackers and even Molotov cocktails,” the German newspaper Bild reported Wednesday. 1,500 police officers were on the scene with “water cannons and armored clearing vehicles” to vacate the occupied village, the newspaper added.

Taking a leaf out of the jihadi playbook, violent climate agitators were seen using small kids as human shields, German reports suggest.  “Police urge activists not to use their children as shields,” prominent German journalist Julian Reichelt tweeted on Wednesday.

“What is happening in Lützerath is nothing more than Green Terror against the state. Incendiary devices and stones [thrown] on police,” he noted.

Police deployed around Lützerath on Wednesday and started the eviction of climate protesters in the village.

The energy giant RWE is set to bulldoze the village in North Rhine-Westphalia (NRW) — the most populous federal state in Germany — to start opencast brown coal mining operations.

“The evacuation of Lützerath has begun,” police wrote on Twitter. “The area is being fenced off. People in the cordoned-off area currently have the opportunity to leave the place without further police measures.”

During the evacuation, police said activists had thrown stones and fireworks in their direction.

Police had earlier made a loudspeaker announcement at the site, telling protesters they could leave without repercussions.

Climate militants called for violence, spraying the village with graffiti slogans like “Kill the Cops” and “Are you Ready for the Riot,” video clips from the scene show.

The climate clashes come less than two weeks after migrant gangs armed with fireworks attacked police and firefighters on New Year’s Eve in cities across Germany. According to German media reports, 15 police officers and 18 firefighters were injured in the rioting.

After Germany, the U.S., and European allies placed sanctions on Russia following the invasion of Ukraine, the country was confronted with a massive energy crisis. Russia was Germany’s biggest natural gas supplier, a major source for powering the industry and generating electricity. Russian gas supplies have also been disrupted after mysterious explosions in late September blew up large parts of Nord Stream 1 and 2 undersea pipelines.

As winter bites in, Germany, Europe’s biggest economy, faces widespread “de-industrialization,” analysts fear. German public broadcaster Tagesschau warned that “according to a study, massive surge in gas prices may lead to the de-industrialization of German and Europe.”

The government’s rationing energy supply isn’t helping either. Citing a recent industry survey, Bloomberg News reported that the German manufacturers were “running out of ways to save” energy. “Large parts of German industry will no longer be able to avoid production cuts if companies need to further reduce natural gas consumption,” the broadcaster added.

How easily the left can get useful idiots.

With enough funding, any organization can buy mercenaries to do their dirty work.

Government schools are a “useful idiot” assembly line. Homeschooling is illegal in Germany.

The design of the American “public” school system was borrowed from the Germans.

I’M SO PASSIONATE ABOUT THE ENVIRONMENT THAT I WANT TO LITTER IT WITH BLOOD!

Are this Molotov Cocktails made with biofuels?

To: TGG
From: The Collective BadThink Poitzei
Re: Unauthorized Info-Spewing (Yours)

You allude to something perfectly feasible in protest-device construction, based on *how energy-wrangling actually works.* Were you on The Right Side of History, you would be excused, even encouraged, as, for example, Black-Bloc, and BL:M training and instruction in inteligence, weapons and tactics. As you are infected by WrongThink, this is your non-warning: we ban you from The Greatly Limited Conversation, with Prejudice. (What, you didn’t know there was a protocol for this? The more fool, you.)

In principle, chastizement like this is for your reeducation; but really we hope you continue so we can declare “Yet, he persisted.” with the next round of correction.

As an example for others, really. You’re presumed irredeemable. We are, however, egalitarian. Everyone is useful for something.

The People’s Committee on This, Too is Our Business (Because we Say So.)

Hey, man. I got some of your mail by mistake, it seems.

Petrol in the bottle, diesel for the wick. I guess biofuels could do but the old fashion recipe has been proven… time and again.

Blood sacrifice to appease one’s god has a long history. They’re just appeasing Gaia. Blood can be an excellent fertilizer.

Makes a damn fine sausage, too.

That precisely defines ‘little Greta’. This borderline schizophrenic girl promotes destruction. It is about time she is held accountable as an environmental terrorist.

Make a law banning climate activists from having electricity or cars

After WWII, we pacified the Germans. Maybe we ended up gelding them. No one shows any willingness to bring what German society was so good at not long ago: peace and order.

The protestors are not that far in ideology from the German government at heart. It is just that the German government has no other way to deal with the energy shortage and avoid being hung by their freezing citizens, nor can they make us furnish the energy. So against their will they have to produce more energy. Note that anti-lockdown demonstrators, defying the power of the German State, were everything short of free fire zones.

Not that they need to be chopped fine and boiled for a long time.

Petrol in the bottle, diesel for the wick. I guess biofuels could do but the old fashion recipe has been proven… time and again.

I’m guessing sharpshooters would be of great use in this instance as the adults are taller than the children, and they’ve proven by using their children as shields that they are unfit to be parents.

More on German politics. The Green Party [which is part of the governing coalition] just fired the Federal Justice Minister [Ministry of Justice=our DOJ with the Minister being like our Attorney General]. He was fired explicitly because he was/is a white male. I know, a white male in Germany is shocking. He was explicitly replaced by a black female [African ancestry] because she is NOT a white male.