Planned Parenthood and ACLU wanted the Supreme Court to stop the law while the legal battles continue. 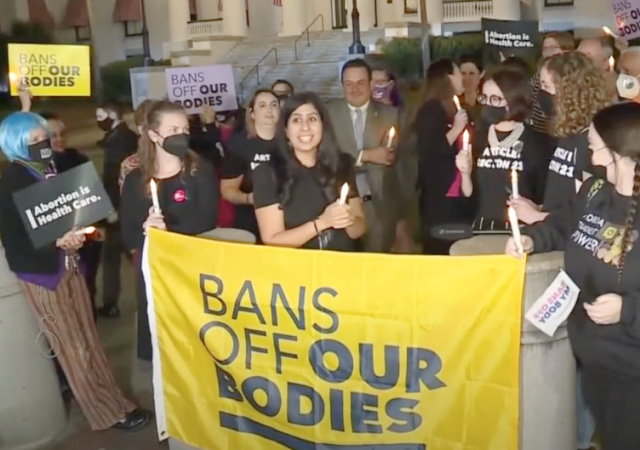 The Supreme Court of Florida decided 4-1 not to temporarily suspend HB 5, which bans abortion after 15 weeks.

But the court agreed to hear the Planned Parenthood and ACLU in the near future.

The justices did not expand on their decision.

In views of this Court’s longstanding precedent, I conclude that the petitioners have satisfied the burden required for this Court to lift the automatic stay of the temporary injunction.

Therefore, I would grant the petitioners’ motion.

The court will schedule the oral arguments in a “separate order”:

The plaintiffs went to the Supreme Court because the “1st District Court of Appeals tossed out a temporary injunction issued by Leon County Circuit Judge John Cooper.”

Cooper ruled HB 5 violates the Florida Constitution, pointing to Section 23: “Every natural person has the right to be let alone and free from governmental intrusion into the person’s private life except as otherwise provided herein. This section shall not be construed to limit the public’s right of access to public records and meetings as provided by law.”

But “[T]he appeals court ruled the plaintiffs could not show ‘irreparable harm’ from the 15-week limit.”

The plaintiffs told the Supreme Court:

“Granting plaintiffs’ requests to stay the First DCA’s decision and allow the injunction to take effect would restore the status quo while litigation continues and allow Floridians to resume exercise of their constitutional right to decide whether to carry a pregnancy to term or obtain a pre-viability abortion — a right that this (Supreme) Court has repeatedly recognized is encompassed by the Florida Constitution’s right of privacy,” said the brief, filed by attorneys for the American Civil Liberties Union, Planned Parenthood, the Center for Reproductive Rights and the national law firm of Jenner & Block.

When does another’s body become your body? That baby didn’t make a mistake YOU did. You’re admitting you’re a slavemaster.

There is never a right to choose murder without consequences whether that life is a minute or a 100 years old.

Sadly, some states are expanding abortion right up to and sometimes, after birth.

A stain on America that no amount of Bleach It can remove.

This is a website that discusses the law. It sure would be good if people stopped using the word “murder” as a synonym for “kill”. “Murder” is an illegal killing. There are many kinds of legal killings, e.g. justifiable homicide while in the act of self-defense.

It does not further the argument against abortion because it shows that you are basing your position on dogmatic religious beliefs. Not everyone equates a few-cell zygote or even a few week-old fetus with a being that can feel pain or fear for its life, or otherwise is worth being concerned about, Not everyone believes that God imbues a fetus with a soul. Etc.

The majority of people in this country are okay with very early abortions. So it’s more about drawing lines to decide when abortion is okay, not if it’s okay. We do not live in a theocracy, Standing on absolutist religious beliefs will only end up assuring that reasonable laws on this issue continue to be thwarted, and I suspect too that it’s why the left has pushed the envelope far the other way.

The theocracy denies evolution of human life from conception, six weeks to baby… fetal-baby meets granny in state. The theocracy stands up for the wicked solution, the final solution, to a hard problem: keep women affordable, available, and taxable, and the “burden” of evidence sequestered in darkness. The theocracy is an advocate of Diversity (i.e. color judgment, class-based bigotry), Inequity, Exclusion) (DIE) doctrine.

Arguments about whether a “few-cell zygote” is a “person” or not are a distraction. The relevant argument is about “missing persons”. A year after a pregnancy occurs, the question is “how many persons are there?”. If the pregnancy is aborted there is one. Otherwise, there are two. Abortion results in a missing person – a person was eliminated.

That said, in a democracy it is not wise to overreach the will of the majority. Not everything which is wrong requires a legislative solution. The Florida law is probably the wisest compromise for the present time. It brings Florida law into agreement with abortion law in most of the world. It’s up to the pro-life community to show that life is possible without abortion after 15 weeks.

you people have to dehumanize it to justify the death.
How sick are you?

15 weeks into a pregnancy give a woman ample time to decide to kill her baby.

What it leaves unaddressed is what to do about that jerk boyfriend who splits at 20 weeks.

Or she decides after 15 weeks, or after she realizes she is pregnant, that she no longer wants her boyfriend, so she needs to abort so she can ditch him. It works both ways.

What about when she decides to kill their child no matter what the father wants?

Six weeks to baby meets granny in legal state, if not in process.

That said, the wicked solution, the final solution, is neither a good nor exclusive choice. #HateLovesAbortion

We all better learn to be hunter gatherers

This thing we call civilization isnt going to last much longer…

Coding won’t be needed, ability to survive in a hostile environment, will

Historically, God does not allow nations which practice child sacrifice to continue to exist. He gave the Canaanites 400 years, but we have better technology.

Strange that the people screeching loudest about “body autonomy” and “the government doesn’t get to interfere in healthcare choices” and ” the government has no place between a woman and her doctor” are the same ones that were screaming about forced Covid shots, Immunization ID’s and not letting people into hospitals is they weren’t vaccinated.