This kid supposedly had nightmares about climate change. 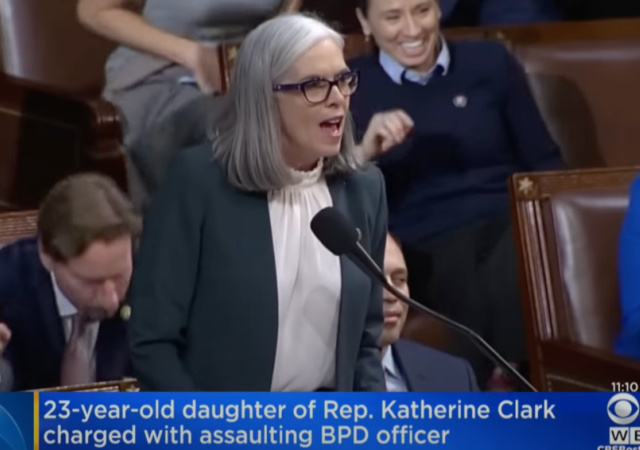 The child of Democrat Minority Whip Rep. Katherine Clark (MA) pleaded not guilty to assaulting a cop and other charges during an anti-cop protest in Boston.

I guess Clark’s child was born a boy, but everyone says daughter, even though I saw that the person identifies as non-binary. I am so confused.

Riley Dowell, identified as Jared Dowell in documents, appeared in court on Monday to plead not guilty to the charges.

The protest at Boston Common occurred on Saturday. Authorities claim Dowell spray painted “NO COP CITY” and “ACAB” [All Cops are Bastards] on the Parkland Bandstand. Prosecutors told the court he “flailed, striking an officer in the face” after the vandals confronted the police who responded to the protest.

Judge orders $500 cash bail, which was already posted. Dowell is also to stay away from Boston Common. Not guilty plea automatically entered. Next court date 4/19. @NBC10Boston

Dowell is Clark’s middle child. Fox News reported this is the same child who supposedly had “climate change” nightmares:

The House Democratic whip in December recalled Dowell “waking up with nightmares” over climate change.

“One of the biggest changes is going to be that we’re coming into this in the minority, but the commitment that we have had to the people of this country, to workers, to women, to the climate is going to continue on,” Clark said.

“And let me tell you what it means to me coming in as a different generation,” she continued. “I remember my middle child waking up with nightmares over concern around climate change. I’ve had my family at a movie theater, when the movie stopped, my children immediately felt there must be a shooter in the theater with us.”

“These are the type of experiences that we are going to bring as we continue to push to meet this moment of challenge for the American people with progress,” she added.

How about you, I don’t know, stop scaring your children so they don’t grow up like this? You can teach your children to care for the environment without going off the deep end.

Last night, my daughter was arrested in Boston, Massachusetts. I love Riley, and this is a very difficult time in the cycle of joy and pain in parenting.

This will be evaluated by the legal system, and I am confident in that process.

Just look at who raised her.

Which one, the moonbat mother, or her misbegotten son/daughter?

I need an abortionist, a Democrat “hero”, and she’s got to be liberal, and he’s go to be progressive.

“I’ve had my family at a movie theater, when the movie stopped, my children immediately felt there must be a shooter in the theater with us.”

That’s why they make tritium night sights, you damn snowflake.

She pleaded “not guilty” and then added, “do you know who I am?”

To which the Massachusetts Democrat judge responded, “Release her!”

Of course, the left wing media including both Boston newspapers called this rodent Clark’s “daughter”. I can no longer believe anything they say. The press is pathetic.

The Herald used to be the last bastion of sanity in Boston… but even that is gone now.

I would consider this a form of child abuse.

lord–a couple of loonies indeed–mom looks like one of those “prizes” on the old game shows–first prize: one night with her–second prize: two nights with her

She looks like a prototypical leftist female politician. She could be sisters with Hochul, Katie Hobbs, or any of a dozen other such.

Looks like the litter doesn’t fall far from the trash can.

Or the horse apple far from the horse’s ass

Now you had me checking her hair for green streaks.

?Boston? I thought they were anti-fu-fu-fu-ing in Atlanta this week. It’s like they’re coordinated or something.

This Riley probably could barely afford the spray paint.
Busfare to ATL was out of the question.

Can we expect the same results with every kid if The Screaming D’s get what this Congresscritter whips for: the govt, meaning themselves, in loco parentis raising your kids as they do theirs.

It’s like they’ve bent on manufacturing little foot soldiers for their agenda. “They’re not your kids; they’re our kids.” Said one of the national party operatives with byline, back in the day.

Hey, they have the virtue of consistency.

Let’s deprive them of their foot soldiers by removing our children from the government schools.

I posted this last night…
$500 dollar bond, what a joke

If Congress doesn’t find a way to release these men, we must find courage and a way …

One kid is the son of a multimillionaire

Caption says daughter but see no female in that courtroom.
But getting you Intersectionaly weighed in will help in a two tier justice system.

Got pretty cleaned up to show up in court, why not show up in your normal non conformist clothes

By the way, did you Al know Mark Steyn had 2 Heart Attacks in December ?

He’s alive in France, pretty serious, 1st one he was in London went on air didn’t know he was having a heart attack, went to France and had a major one.

I don’t know if he got the clot shot, there is a picture of him
And Diamond saying he was lucky cause he survived

Damn… so sad about Diamond amd her sister silk called out the clot shot, right in front of President Trump!

He didn’t make it and he was fooled, but he has to come to terms with it and be the Lion to fight these bastards, not just the pharmaceuticals, but our military and all the other globalists were in on it…

If you have the time, listen to this, the bastards put snake venom in those vaccines, it’s why heparin and warfarin couldn’t unclog the clotting Its all coming clearer…

The video gives a possible helpful medicine, which of course is not available, amd they weren’t pushing it, don’t have all the info yet, but they did say Licorice root has similarities… so I’d be drinking Lic tea if i got the shot….Got to be careful with it, and they of course didn’t really promote it but what Ive read, which has nothing to do with Covid info, 3-4 weeks on and 3 week breaks secondary to possible side effects

Heparin and warfarin don’t unclog the clots because they don’t consist of normal blood components.

I doubt even Reteplase would work.

Yes the long weird white plastic looking clots, I have a video that if you havent seen it, will blow your mind

And of course the ones with iron, which are red and also longer than a foot, have all non human snake, metal
Components in them.
I don’t know how the people that are autopsied made it as far as they did.

And why some people and not all
Or is it just a matter of time?

I am scared for my woke son, 2 shots and a booster, Iran they had him full of fear, I didn’t think I could walk him off the ledge

And my daughters pilot husband, can’t believe he did it, he too was fearful
Of losing his job, my daughter told him. not to do it but when Covid got he lost his pilot job and received absolutely no compensation, not a penny.. Big shots oil producers, the Wilks in Texas, big with fracking, they have Ted cruz in their pocket, major major donors

Oh, and they are “real” religious, even one was a fundamentalist preacher

Can’t make this crap up

Let 4 pilots go, didn’t pay them a penny, all had family , kids

And they have the nerve to keep
Asking him back…

Fortunately, Steyn had the worse hit while in France and was saved…just. Had this been the bigger one in the UK…no more Mark. Listening to him… it was a big hit. and you can hear it in his voice. The degree of coronary stenosis predicts future MIs….the ejection fraction post MI predicts long term survival. The latter is the question.

[sociopolitical] climate change and progress from the 3/5 compromise to 1-2 affirmative discrimination.

Katherine Clark, AKA as “Lurch” in these parts, with all due respect to Ted Cassady.

Is it me, or does Clark look like Katie Hobbs’ sister from another grifter?

1) Is this a son named Jared or a daughter named Riley? Why, yes.

2) Is this the same “child” she was recently whining about supposedly waking in the night, crying in fear over climate change? Why, yes.

3) Are all members of this family including, of course, her, mentally ill? Why, yes; yes she is.

The best wake-up call that person could have gotten is not a dime for legal defense from family – needs to wake up to the real world and start having more relevant fears than Climate Change.

Someone who has such nightmares is truly brainwashed

Pretty ironic that this “child” who mommy claimed to have nightmares about so called climate change has grown into a person that any thinking person could legitimately have nightmares about….someone who will beat you up on the street for having different worldviews… will burn down your business with or without you inside, will terrorize and destroy your place of worship or charity you might be a part of…,

“Child” is better than “daughter,” which appears to be a fantasy since he was born a boy and showed up in court in a suit and tie (from the photos I’ve seen). Maybe “offspring” would have been suitable. But “child” works since we’re certainly not going to call it a “daughter.”

My comment was more about how certain individuals of certain political ideations are protected under the child umbrella. I have read and heard Hunter Biden referred to as Joe Biden’s child… and how dare we. All the while an actual child of a conservative… ie Baron Trump @11 was fair game.

I am still my mother’s child, after many decades

Oh, how the media is getting slaughtered on Twitter for calling her son as her daughter.

Unless they’ve changed it, Boston News 25 said ‘son of’.

“…an I saw Satan laughing with delight the day, that common sense, died…”