“The person familiar with Klain’s plans was not authorized to discuss the matter publicly and spoke on condition of anonymity to confirm the development, which was first reported by The New York Times.” 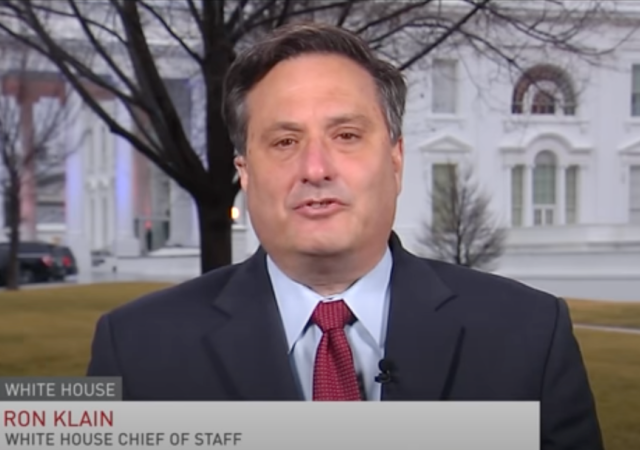 Joe Biden’s White House Chief of Staff, Ron Klain, is expected to leave his position in a matter of weeks. The timing of this is a little suspicious, given the still unfolding classified documents scandal.

White House chief of staff Ron Klain, who has spent more than two years as President Joe Biden’s top aide, is preparing to leave his job in the coming weeks, according to a person familiar with Klain’s plans.

Klain’s expected departure comes not long after the White House and Democrats had a better-than-expected showing in the November elections, buoyed by a series of major legislative accomplishments, including a bipartisan infrastructure bill and a sweeping climate, health care and tax package that all Republicans rejected.

The personnel change is also a rarity for an administration that has had minimal turnover so far. No member of Biden’s Cabinet has stepped down, in stark contrast to Donald Trump’s White House, with frequent staff turmoil and other crises.

The person familiar with Klain’s plans was not authorized to discuss the matter publicly and spoke on condition of anonymity to confirm the development, which was first reported by The New York Times.

Notice how the AP couldn’t get past three paragraphs without taking a dig at the Trump administration. Our media is garbage.

One insider repeats the idea that this was expected. NBC News reports:

In private conversations dating back to the middle of last year, Klain made known that the job is exhausting and talked about departing around the mid-point of Biden’s term, one person familiar with his views said.

“No one is surprised,” an administration official said.

As the first departure among a stable core of senior advisers closest to the president, Klain’s exit is likely the first domino in a series of staffing moves to come. Advisers have long said a wave of them would likely come after the State of the Union on Feb. 7, with parallel moves as part of a campaign ramp-up.

Klain’s exit comes at a critical time for the White House and presents Biden with one of his most difficult personnel challenges to date.

As we’ve been saying: they want Biden gone.

Pretty hilarious that Ron Klain departure news drops and then shortly after we're told oh yeah turns out DoJ is now finding more classified documents Biden stole from his time as Senator too.

Ron Klain stepping down is just a further indication they’re gonna take out Biden with the classified docs scandal and then come after Trump.

Ron Klain will step down as Biden's chief of staff within WEEKS as president faces legal turmoil over classified documents found at his home and think tank https://t.co/kwnegtoVO4#BidenClassifiedDocuments #BidenCrimeFamilly pic.twitter.com/pboLqW84Xd

For what it’s worth, former Arkansas Governor Mike Huckabee appeared on FOX and Friends this morning and said you shouldn’t read too much into this. He said Klain is likely burned out or is preparing to go to work on a political campaign.

Jeff Zients to be Biden’s next chief of staff https://t.co/UNbuasOG25 via @politico

Too bad what is left behind is just as corrupt.

Will KJP fill his shoes? LOL!

He has been given advance notice that the incoming President, Kamala Harris, is already conducting interviews for her new Chief of Staff.

She is considering Alec Baldwin because she’s been told he’s a straight shooter.

I saw this story last night when it first appeared, which on the timeline was prior to the announcement of more documents found at Casa Biden à la Wilmington.

I am interested in knowing why Klain is leaving the WH? Why now at this point in time when his boss is under a Special Counsel investigation?

Of course, he and his emails, text messages, phone conversations, meeting transcripts are all now part of the investigation. Right?

Or did he get into a hissy fit shouting match with Susan Rice, Ann Dunn and Bill Bauer and lost?

Ron, the all I ever wanted to be was a DNC power broker like Marc Elias, is leaving the job he sought his entire career is leaving doesn’t make sense.

Unless, he answered Barack’s phone call and he knows the gig is up.

“I am interested in knowing why Klain is leaving the WH? Why now…”

“Unless, he answered Barack’s phone call and he knows the gig is up.”

That’s cheating. You pulled back the curtain.

Sorry, you caught me. I read the book and saw the movie.

When the puppet is in flames, the puppeteer becomes surplus.

I think it’s only fair that Xi Jinping have final say on the new WH Chief of Staff. I mean, he paid good money for it!

An alternative view is that he should have ensured that all of Biden’s residences and offices where quietly gone through with a fine tooth comb over the 8 weeks they had before the story on the November documents broke.

FWIW, I don’t buy the story that Biden didn’t have cleared lawyers on his legal team. You can’t swing a dead cat in some of the offices I”ve worked without hitting a cleared lawyer.

Doesn’t work with information at the SCI level. You not only have to have “a clearance,” but you need to be specifically “read in” to the specific operation.

That same line of reasoning applies to any DOJ/FBI search team as well.

Just cover the doc (should have a cover sheet anyway) after seeing the header.

By “cleared” I assumed having the read on for the most likely sci caveats. Multiple thousands of lawyers meet that description. My company’s lawyers are cleared for anything we have a contract to support.

“[UPDATE: Jeff Zients to be New Chief of Staff]”
I want to see the audition tape. Can we see his mouth moving?

Who knows the ship is finally sinking and is hitting the lifeboat before everyone else?

Thinking it over I think the likely scenario is that this is the way Dems are going to get rid of Biden and then use the Classified stuff to try and pull Trump into court and prevent him from running. A win all the way around for the Dems

Caring for a dementia patient is grueling, it saps the life out of you. Klain is spent.

Zients is reputed to be a lockdown advocate andis known for his critique of Trump;s handling of the pandemic-which included Warp Speed and plans predicated on openning the economy and ending lockdowns sooner rather than later