“American Bar Association, in its role as an accreditor, should not be partisan in [the current culture] war”

“American Bar Association, in its role as an accreditor, should not be partisan in [the current culture] war” 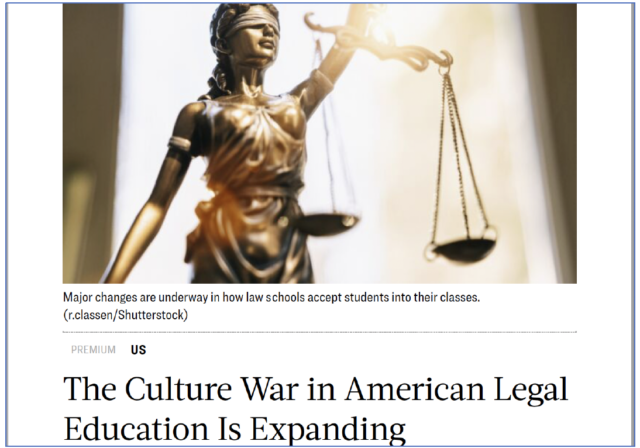 This author was recently quoted in an article about “progressive” pressures on American legal education that appeared in The Epoch Times. Author Ross Muscato writes:

A broad-ranging and growing progressive movement in American legal education and higher education is upending and reforming policies and practices in pursuit of increasing diversity in student bodies, as The Epoch Times reported recently.

Much of the article focuses on the American Bar Association’s move to make law school admissions tests (usually the LSAT) optional, and the decision of several highly-rated law schools to stop cooperating with U.S. News & World Report’s law school rankings. LIF has covered both.

Here are my comments as quoted in the article:

The Legal Insurrection Foundation is a conservative organization that has been a consistent and pointed critic of what it views as the ABA’s push to integrate woke policies into the teaching and practice of law.

“We are in a culture war in this country,” said Johanna Markind, counsel to Legal Insurrection Foundation, in a conversation with The Epoch Times.

“ABA promotes ideology in other ways besides whether or not to drop the LSAT.

“In 2016, for example, it added a provision to its Model Rule of Professional Conduct 8.4 in such a way as to allow a ‘heckler’s veto,’ which would bar lawyers from saying something that another person might consider harassing or discriminatory, and subject lawyers to sanctions for doing so.

“Imagine, for example, that a lawyer batting the breeze in his law firm mentions the pending Supreme Court cases against Harvard and the University of North Carolina [cases challenging the constitutionality of affirmative action], and says he thinks the Supreme Court should prohibit racial discrimination in college admissions.

“Now imagine further that someone in the office takes offense to that and reports him for making a discriminatory remark. Sound ridiculous? It’s not so different from what got Professor Joshua Katz fired from a tenured position at Princeton; he was branded a race-baiter for opposing demands for race-based favoritism.”

You can read the entire article here.

I offer an alternative formulation: The ABA, as a partisan in the current culture war, should not be an accreditor.

A better idea than hoping they magically become impartial.

A few years back Tucker would have guests, Bar members, who were illegal aliens. That puzzled me… still does.

Ms. Markind is, of course, 100% correct. However, she is defending a barricade that was breached long ago, and regularly since. The ABA is to legal education what CNN is to journalism. Nobody paying attention takes the ABA seriously.

I’d say the ABA is to legal education is to what MSNBC is to jounrnalism.

The head of the ABA is to legal education what Kamala Harris is to vice presidents.

Can’t argue with that!

Who benefits from churning out stupid lawyers? Follow the money, I guess.