Chinese oil company “will invest as much as $150 million in the first year and $540 million over the subsequent three years.” 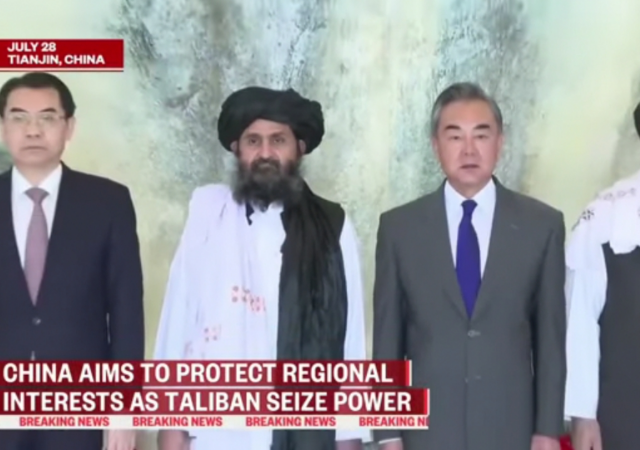 Seventeen months after taking power, the Taliban has signed a major oil deal with Communist China. On Thursday, a Chinese state-linked energy company sealed a 25-year oil exploration agreement with the Taliban regime.

The deal is expected to bring in nearly $700 million in investment in the next four years to the Taliban-run Islamic Emirate of Afghanistan, news reports suggest. “Xinjiang Central Asia Petroleum and Gas Co. will invest as much as $150 million in the first year and $540 million over the subsequent three years to explore five oil and gas blocks” covering an area of around 1,738 square mile in northern Afghanistan, the newspaper Times of India reported citing Taliban-regime sources.

“The militant group will earn 15% royalty fees from the 25-year contract. Daily oil production will start at 200 tons and gradually rise to 1,000 tons. The five blocks are estimated to hold 87 million barrels of crude oil, according to a previous survey.” the Indian daily added.

The BBC reported the details of the China-Taliban deal:

Afghanistan’s Taliban government is to sign a contract with a Chinese firm to drill for oil in the country’s north.

It would be first major energy extraction agreement with a foreign firm since the Taliban took control of Afghanistan in 2021.

The 25-year deal underscores China’s economic involvement in the region. (…)

“The Amu Darya oil contract is an important project between China and Afghanistan,” China’s ambassador to Afghanistan Wang Yu told a news conference in the capital Kabul. A Chinese state-owned company is also in talks over the operation of a copper mine in the east of the country.

The massive oil deal comes as the Biden administration and its western allies are pouring in millions to sustain the Taliban-controlled country. “Forty-one countries and organizations committed $2.44 billion in humanitarian aid,” The Wall Street Journal reported in March. “The U.S. committed $204 million at the conference, a bit over half of the U.K.’s pledge of about $376 million (£286 million),” the business daily added.

While the West feeds impoverished Afghans, the Taliban are busy converting the country back into a safe haven for fellow terrorist groups seeking to wage global jihad. Afghanistan “could once again become a base for international terrorist attacks after the withdrawal of US and Nato troops last year,” a United Nations report feared in June 2022. Al-Qaida, the Taliban’s main ideological ally, is operating under the protection of the new Islamic Emirate and enjoys an “increased freedom of action,” the report found.

President Biden’s disastrous withdrawal from Afghanistan has opened up the jihad-ridden country to Beijing’s strategic and commercial exploitation. The oil deal will serve as a blue-print for China’s access on Afghanistan’s untapped resources estimated to be worth over $1 trillion, news reports suggest.

“The progress of this project has created a model for China-Afghanistan cooperation in major projects in energy and other fields,” China’s ambassador to Afghanistan Wang Yu said Thursday.

I suspect, like Africa, China will find that these people make poor partners, and are more like leeches.

In the case of Africa, good. No more White man’s burden.

The Chinese are even worse at oil extraction than the Russians. This will produce very little.

But one has to wonder about the Muslims that China keeps as slaves, knowing Muslims, might be wrong sect,

Any questions left on why Biden pulled the US out of Chinastan?

nope! no questions.
well…maybe one.
why isn’t the big guy in front of our courts for treason?

Lol they certainly own Cocaine Mitch and Coco Chow.

Is Hunter Biden on the board of directors for Xinjiang Central Asia Petroleum and Gas Co.?

The silver lining here is that China is even more expert at pissing exploitable foreigners their partners off than we are.

Chinese communism and Islamic supremacism/totalitarianism make natural bedfellows. These evil (and, hypocritical) reprobates can overlook the religious contradictions that are inherent in such an alliance, as long as it advances their interests.