23-year old Mohsen Shekari was “found guilty by a revolutionary court of “waging war against God”.” 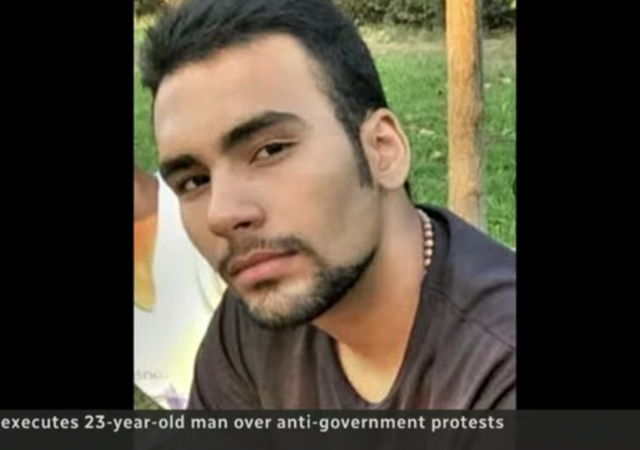 Iran has executed its first prisoner accused of taking part in the anti-regime protests raging across the country since September. On Thursday, 23-year old Mohsen Shekari was hanged for the crime of  “Moharebeh,” or “Enmity Against Allah,” an act punishable by death according to Iran’s Islamic Sharia law.

“Iran has conducted the first known execution in relation to the anti-government protests that have rocked the country, hanging a man who was found guilty by a revolutionary court of “waging war against God”,” the London-based Guardian newspaper reported.

Shekari was among several Iranians who have recently been sentenced to death for participating in protests that began some three months ago after the custodial death of a 22-year-old Iranian woman accused of violating country’s strict Islamic dress code. The Associated Press noted that “at least a dozen people so far have received death sentences over their involvement in the demonstrations.”

Family of #MohsenShekari is seen saying farewell to their son.

Brave Mohsen was executed yesterday by the brutal Islamist regime in Iran simply for protesting.

Germany and the United Kingdom responded with a fresh round of sanctions against Tehran following Thursday’s execution.

The French government indicated that a new set of EU sanctions were being finalized. “The European Union is set to agree new sanctions targeting Iran over human rights abuses in its crackdown on protesters in the country and the supply of drones to Russia, France’s foreign ministry spokesperson said on Thursday,” Reuters reported.

A German government spokesperson told reporters in Berlin on Friday that the government “strongly condemns the Iranian regime’s death sentence and execution of a demonstator in connection with the demonstrations in Iran.”

The government said sanctions include “six individuals linked to the Revolutionary Courts that have been responsible for prosecuting protesters with egregious sentences including the death penalty.” (…)

The UK announced sanctions on Friday against several individuals globally, including 10 linked to the Iranian judiciary and prison systems. Two among the 10 are former directors of the notorious Evin prison in Tehran, and they face a travel ban to the UK along with having their assets frozen as part of sanctions.

Canada announced sanctions on 67 individuals and nine entities in several countries, including members of Iranian judiciary for “gross and systematic human rights violations.” (…)

The Office of the UN High Commissioner for Human Rights on Thursday decried the execution of the protester, saying “executions following unfair trials constitute an arbitrary deprivation of life.”

In recent weeks, Iranian courts have held show trials and handed out death sentences to protestors for the ‘crime’ of daring to protest against regime. Last month, a group of United Nations-designated human rights experts confirmed in a statement that the Shia-Islamic regime was “indicting people with charges punishable by death for participating in peaceful demonstrations.”

Besides sentencing protesters to death, the regime forces are killing demonstrators in a bid to quell the uprising. More than 400 Iranians have died since the protests first began in mid-September following the death of a 22-year-old Iranian girl in the custody of the Sharia-enforcing Morality Police.

An estimated 16,000 Iranians have since been arrested for taking part in the protests.

Despite police shootings, mass-arrests, and death sentences, the anti-regime protests seem to continue in Iran. Social media videos showed defiant Iranians calling for the “death of the dictator” Ayatullah Khamenei, and for an end to the 43-year-long Islamic rule.

Anti-government protests in Zahedan, Iran are surging after the execution of, Mohsen Shekari, an Iranian protester. Listen as the crowd chants “Death to the dictator” in Farsi:pic.twitter.com/6y5qPTHgZt

Pretty much coming to America..

Like China, Iran’s ruling regime is malevolent, unrepentant and evil. Yet, there are far too many ruling class apparatchiks and businesspeople in the west — Leftists and Dumb-o-crats, prominently, but, not exclusively — who are willing to get into bed with these reprobates and to turn a blind eye to their predations, their domestic oppression and their global belligerence.

True, and you can add a number of other countries in the area that aren’t a whole lot better.
There’s a good reason a bunch of religious folks wrote the separation of church and state concept into our Constitution.
Not to be against religion ,or in any way against people that practice their version. Just to keep some from forcing it down the throats of others because of their own beliefs.

As said first execution but many murders by the government already.
It’s the usual modus operandi of totalitarian regimes, and ours would be no different when they get there

Garland is guilty of crimes against humanity in his treatment of the 1/6 protesters, not to mention his violating their Constitutional right to a speedy trial as evidence by his ignoring the Speedy Trial Act of 1974..sanctions anyone?

Not going to deter the Brandon regime for one second. They may even send over a bonus pallet of cash. Although the way things of going the terrorists might prefer yuan.

I hate to say ho-hum but that is what these small sanctions are to Iran. Any European nation that needs petroleum will lie and still buy it from Iran through a third party. Biden will never call these murderous bastards for what they are and China laughs at it all. If the West cannot see that China and Iran along with some of the stepchildren from Satan want to destroy us then what can be done? Only by stopping ALL trade and dialog with them can we stop this madness. Biden is a traitor to not only our country but to the world by his coddling of China and Iran.

Is the P5+1 Euro-Obama-Biden nuclear deal off the table? Or is this “event” just a speed bump on the way to a peaceful nuclear Iran? What does John Kerry think? He’s the frontman.

What about Catherine Ashton (lifetime peerage baroness.) She signed the “no-paper” deal with Zariff. Remember when it was called the Davos “no-paper” deal? Its been scrubbed from search engines.

The protester isn’t even LBGQT. Do normies count as a full execution or just 3/8ths of a execution? I think we have some wiggle room here.

The Krauts so wanted to do business with Iran they ignored the fact that it is a fascist theocratic dictatorship.

China will probably have a round of executions, too.

Hence, I’m of the mind that if NorK ever again suffers a manmade famine, the response of the West should not be a humanitarian sunshine policy. Maybe the common people in NorK will get the idea that Communist cadre are packed with vitamins.

Fucking European hypocrites. As soon as attention is elsewhere, they’ll be on planes to Iran to make deals with mullahs.