“At least 326 protestors, including 43 children and 25 women, have been killed in Iran.” 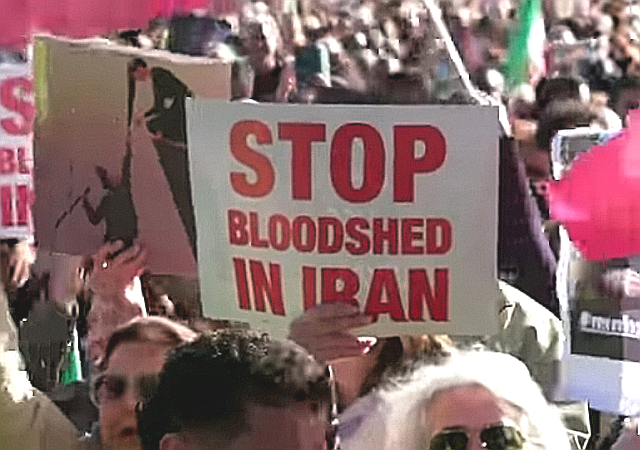 Violent crackdown, mass arrests, and shootings by the Iranian security forces have failed to quell nationwide protests as the anti-regime uprising enters its eighth week. On Friday, thousands took to streets in Iran to mark the recent “Bloody Friday” massacre that took place in the southern Iranian city of Zahedan.

“Thousands of Iranians protested in the restive south-east to mark a 30 September crackdown by security forces known as ‘Bloody Friday’ as the country’s rulers faced persistent nationwide unrest,” British newspaper The Guardian reported. Dozens of demonstrators, including several children, were gunned down by the Iranian security forces two weeks ago in Zahedan.

Widespread protests against the regime, first erupted following the death of a 22-year-old woman in the custody of the country’s Islamic Morality Police, have engulfed cities across Iran, including the capital Tehran—with women burning their Hijabs, and demonstrators braving bullets and tear gas.

So far, hundreds of demonstrators have been killed and tens of thousands arrested, in one of the bloodiest crackdowns by the regime since it grabbed power 42 years ago. “At least 326 protestors, including 43 children and 25 women, have been killed in Iran, according to figures released by Iran Human Rights on Saturday. The true number is likely to be much higher, with many deaths going unreported,” the French TV channel Euronews reported Saturday.

The uprising is “one of the largest sustained challenges to the nation’s theocracy since the chaotic months after its 1979 Islamic Revolution,” the Associated Press wrote Thursday, noting the intensity of the protests.

“Online videos emerging from Iran, despite government efforts to suppress the internet, appeared to show demonstrations in Tehran, the capital, as well as cities elsewhere in the country. Near Isfahan, video showed clouds of tear gas. Shouts of ‘Death to the Dictator’ could be heard—a common chant in the protests targeting Iran’s Supreme Leader Ayatollah Ali Khamenei,” the AP added.

The women are at the forefront of the uprising, which first began as a protest movement against the country’s draconian Sharia dress code. The Guardian newspaper reported:

On Friday, video emerged of the archer Parmida Ghasemi removing her hijab during an awards ceremony in Tehran. In the video, Ghasemi, standing along with other athletes on a podium, lets her headscarf fall while unseen people in the audience clap and shout “bravo”. The athlete next to her tries to pull up Ghasemi’s scarf, but she moves her head away. Reuters could not verify the authenticity of the video.

Failing to halt the protests with a bloodbath on the streets, the regime is ordering the execution of demonstrators for merely demanding their basic civic rights.

The group of United Nations-designated experts on Friday sheepishly “encouraged Iranian authorities on Friday to stop indicting people with charges punishable by death for participating in peaceful demonstrations,” the international body said in a statement.

“In Tehran province, eight people were charged by the Islamic Revolution Court on 29 October with crimes carrying the death penalty, namely ‘waging war against God’ or ‘moharebeh‘ and ‘corruption on earth’,” the UN confirmed.

“Two days later, the Tehran prosecutor announced that some 1,000 indictments had been issued in connection with recent ‘riots’ in the province and that public trials were scheduled for a number of people ‘in the coming days’,” the statement added.

Tonight, in Tehran’s Naziabad neighborhood, people gathered to chant “death to dictator”. Even though more than 15000 Iranians have been arrested, the wall of fear is gone. Iranians will topple this regime. #MahsaAmini pic.twitter.com/nInG7FM7qr

German Chancellor Olaf Scholz on Saturday backed more sanctions against the Iranian regime in the wake of the bloody crackdown.

The new round of European Union sanctions, expected to be announced on Monday, will be aimed at “all those who are responsible for this violence against their own people”—which would imply Iran’s ruling clerical elite and members of the country’s Islamic Guard (IRGC), the German leader said in a televised address.

The decision to tighten EU sanctions may also be driven by the recent supply of large number of Iranian drones to Russia for deployment in the Ukrainian conflict, the German Chancellor suggested.

“Pupils, students, mothers, fathers, grandparents — all of them are fighting on the streets for more freedom and justice,” Scholz said. “Here in our country, we can barely begin to imagine how much courage this takes. More than 300 killed, dozens of death sentences, and more than 14,000 arrests — so far.” (…)

He said that as well as witnessing events in Iran, the international community had been responding with sanctions focused on “all those who are responsible for this violence against their own people.”

Scholz said Germany would support further sanctions scheduled to be announced next week. He said Germany [has been] pushing for a special session of the UN Human Rights Council to be convened as well; this was announced on Friday and is expected to take place later in November. And Scholz noted that Iranian drones were being used by Russia to attack cities in Ukraine, which Iran admitted to last Saturday.

The American government should be on the side of the protesters. We should not be trying to complete the nuclear arms deal with an Iranian government that will use those arms on others, and who continue to brutalize their own people.

But Joe Biden will continue to make the deal.

“The American government should be on the side of the protesters….”

Are you kidding? The “American government” no longer exists.

First, the clown running our country was not honestly elected (nor, it seems, were the democrat clowns in Congress).

Second, the election of 2022 was the most important election in post-Civil War history: it was rigged.

Those things said: our country is no more. We live in a third world country now.

The American government under Obama/Biden aided, abetted, and funded the counter revolution that progressed with transnational wars including the second Iraq war, Islamic State, coups without borders (e.g. Kiev), sacrificial protesters in Afghanistan, Iran, too, etc.

We could sure use that kind of resolve around here.

What is wrong with these people? Can’t they see that everything is rigged and the cause is hopeless? It’s time to “move on” as many like to say around here. No hill is worth dying on.

Seems like our encouragement of social reforms in Occupied Persia is going about as well as our stifling of their nuclear program, and extra-territorial military interference.