Iran should have never been anywhere near the women’s rights panel. 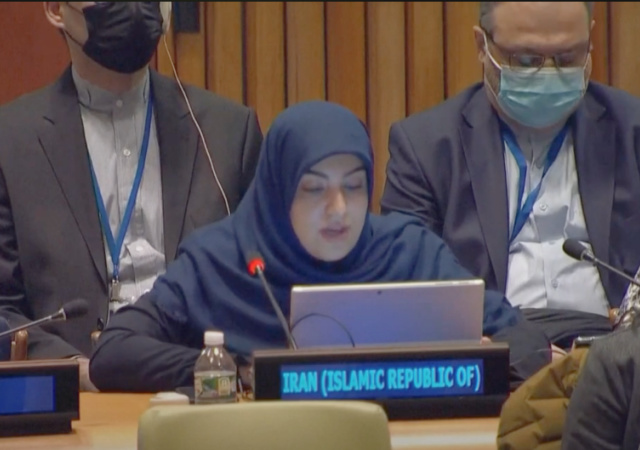 The fact that Iran was ever on a women’s rights panel is a joke.

Then again, the United Nations is a joke. From Politico:

A U.S.-led effort to push Iran off a United Nations panel that promotes women’s rights succeeded on Wednesday, the latest move in a broader Western effort to punish Iran for its crackdown on widespread protests.

The resolution to oust Iran from the Commission on the Status of Women passed with 29 votes in favor and eight against, and overall it is a win for the Biden administration against a long-time adversary.

Yet of the 54 countries eligible to vote, at least 16 abstained — a sign of the wariness about setting a precedent of the U.S. dictating who’s deserving of U.N. panel memberships.

Nonetheless, the overall vote was the latest international embarrassment for Iran’s Islamist regime as it has faced an extraordinary challenge to its rule.

Iranians erupted after Mahsa Amini died in the custody of the regime’s morality police in September. They accused her of “not properly covering up.”

Women have to wear a hijab in Iran according to the penal code: “’Women, who appear in public places and roads without wearing an Islamic hijab, shall be sentenced to ten days to two months’ imprisonment or a fine of fifty thousand to five hundred [thousand] Rials,’ (Article 638). The article also authorizes a sentence of ‘two months in prison or up to 74 lashes’ for ‘[anyone] who openly commits a harām (sinful) act, in addition to the punishment provided for the act.’ (The severe devaluation of the Rial has reduced the impact of the fine, which translated to about $1.20–12 as of October 3, 2022).”

Women also have “to cover their bodies in long, loose clothing.” But hey, Iran totes belongs on a women’s rights panel.

The government has not confirmed or denied Montazeri’s comments:

One state television channel, the Arabic-language Al Alam, said that the comments had been taken out of context, and other state channels said the government was not backing down from the mandatory hijab law.

Iran’s foreign minister, Hossein Amir Abdollahian, when asked about the abolishment of the morality police at a news conference in Belgrade, Serbia, where he was on an official visit, did not deny it, but said, “In Iran, everything is moving forward well in the framework of democracy and freedom.”

Vijeta wrote about Majidreza Rahnavard, the second protester executed by the Iranian regime. They hanged him from a crane as regime loyalists cheered.

So far, more than 488 people have reportedly been killed since protests erupted in mid-September following the death of a 22-year-old Iranian woman in the custody of the hated Morality Police. She was accused of violating the country’s Sharia dress code. Estimated 18,200 people are languishing in Iranian prisons for demonstrating against the regime since the uprising began.

Is that because they shot them in the face and private areas or raped them to death?

In other news, Epstein was removed from the Safety for wayward young women council pending further review.

I thought the whole purpose of these UN panels so that the worst offenders in each given realm could lecture the rest of the world.

Stopped calendar, right once a year… or less.

Now kick them out of the entire UN.

The UN is a laughable corrupt JOKE that just serves as an extended luxury vacation for connected cronies of corrupt jackasses the world over..

It not only accomplishes nothing of value, but its existence prevents any actual effective organization from existing.

The UN is one of those things I am just sick of conservatives even pretending has the slightest bit of value.

I can’t think of any conservatives or libertarians for that matter who think the UN is good for anything but graft and corruption. In the 80’s my Army unit was rumored to be in line for a UN Peacekeeping mission. I told my superiors that if it came down I was out. I signed up to serve under the US to defend America not some rabble from the UN and wear a blue helmet.

The fine is 74 lashes or $1.20? What in the actual…? The US should remove itself from the United Nations because it was a bad idea right from the start and start a United Western Demorcracies or whatever group then cut all funding and foreign aid to those not up to joining.

“The fact that Iran was ever on a women’s rights panel is a joke.

Then again, the United Nations is a joke.”

Spot on. Nailed it.

The woman in the photo is wearing her mask incorrectly.

The entire UN should be displaced to another country, say Mali.
It was a stupid decision to give the veto power to the USSR and to China at the creation of the UN. America is the UN’s biggest funder. WHY???