23-year-old Majidreza Rahnavard was accused of waging “war against Allah and His Apostle.” 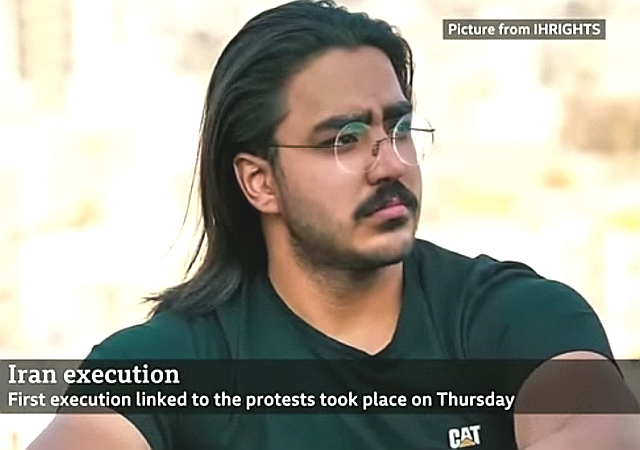 Despite international outrage, Iran executed a second protester for participating in anti-regime demonstrations. On Monday, Iranian authorities hanged a 23-year-old man from a crane after he was condemned by the country’s Shia-Islamic “Revolutionary Court” for having waged “war against Allah and His Apostle,” state media reports said.

A video of the execution circulating on social media showed grainy footage of a corpse hanging from a construction crane, surrounded by a crowd of regime-loyalists screeching “Allahu Akbar.” The crowd gathered at the scene was identified as the men of the Basij militia, a terrorist outfit affiliated with Iran’s Islamic Revolutionary Guard Corps (IRGC).

More gruesome hangings are expected as over a dozen Iranians have received death sentences for their role in the anti-regime protests.

Warning, difficult to watch. This is the moment that the Islamic Republic hanged #MajidrezaRahnavard in public. Basij chant Allahu Akbar, God is great.
The person who sent the video says; Ordinary people refused to attend his public execution event.
Where are you EU?#MahsaAmini pic.twitter.com/IN8gXzLzgt

Iran executed a second prisoner on Monday convicted over crimes committed during the nationwide protests challenging the country’s theocracy, publicly hanging him from a construction crane as a gruesome warning to others.

The execution of Majidreza Rahnavard came less than a month after he allegedly fatally stabbed two members of a paramilitary force after purportedly becoming angry about security forces killing protesters.

The development underscores the speed at which Iran now carries out death sentences handed down for those detained in the demonstrations that the government hopes to put down. Activists warn that at least a dozen people already have been sentenced to death in closed-door hearings.

At least 488 people have been killed since the demonstrations began in mid-September, according to Human Rights Activists in Iran, a group that’s been monitoring the protests. Another 18,200 people have been detained by authorities.

Iran’s Mizan news agency, which falls under the country’s judiciary, published a collage of images of Rahnavard hanging from the crane, his hands and feet bound, a black bag over his head.

Masked security force members stood guard in front of concrete and metal barriers that held back a gathered crowd early Monday morning in the Iranian city of Mashhad. (…)

In the images of his execution, a banner bearing a Quranic verse: “Indeed the requital of those who wage war against Allah and His Apostle, and try to cause corruption on the earth, is that they shall be slain or crucified, or shall have their hands and feet cut off from opposite sides, or be banished from the land.”

The executions after Iran’s lawmakers, serving in the regime’s rubber-stamp parliament, overwhelmingly demanded the death penalty for protesters daring to defy the government. Last month, “227 members of Iran’s 290-seat Parliament signed an open letter to the country’s judiciary asking it to issue death sentences for those protesters who had been arrested,” the Times magazine noted.

So far, more than 488 people have reportedly been killed since protests erupted in mid-September following the death of a 22-year-old Iranian woman in the custody of the hated Morality Police. She was accused of violating the country’s Sharia dress code. Estimated 18,200 people are languishing in Iranian prisons for demonstrating against the regime since the uprising began.

While the Iranian regime is massacring peaceful protesters on the street and hanging them in public squares, the Biden administration still hopes to cut a nuclear deal with the Islamic regime. We continue to believe that diplomacy is the best way to prevent Iran from obtaining a nuclear weapon,” Secretary of State Antony Blinken told a gathering of left-wing “J-Street” activists in Washington, D.C. last week.

After the Biden White House abandoned President Donald Trump’s “Maximum Pressure” policy against the regime and replaced it with appeasement of the country’s ruling Mullahs, Iran has ramped up its nuclear weapons program and reportedly acquired enough weapons-grade uranium to build a bomb.

The west isn’t stepping into this.

Iran is a DV call that NO cops want to show up to. If you haven’t noticed, Americans are sick of being “world cop”

A path they’ve been on for decades… of both Liberal and Conservative rule across the globe. The only one punching this bully in the nose is our Jewish cousin living next door to the wife beater.

From Masih Alinejad’s email above – “Where are you EU?”.

Answer? Doing EU things. Iran isn’t remotely an EU member but they are selling the EU oil which is keeping them from turning into popsicles this winter. Both good reasons to keep EU noses out of this,

“Americans are sick of being “world cop”.

Except for the people running the government.

And the ones who voted for them.

As for the Biden administration, they are finalizing plans to send the Patriot missile defense system to Ukraine to fight Russia.

Where have all the Twits gone? Persian Spring, Obama, then Biden, in the World War Spring series.

Extra-judicial killings on the street are not counted, though in practice they count even more “pours encourager les autres.”

Biden Hidden Junta taking notes which brand of crane to use.

“Indeed the requital of those who wage war against Allah and His Apostle, and try to cause corruption on the earth, is that they shall be slain or crucified . . .

So would someone please remind me how islam is the Religion of Peace?

There will be peace when the infidel is either conquered or dead, that is the peace they mean.

That part of the world had the most advanced society centuries ago and they haven’t advanced since due to being religious fanatics and constantly destroying each other.
If they didn’t have oil they wouldn’t have the money and influence to keep up their behavior.

Leftists and Dumb-o-crats are complicit in these crimes, by granting deference, economic lifelines and diplomatic accommodation to manifestly evil regimes in Iran, China, Cuba, Venezuela, etc.

Can’t wait for them
To have nuclear weapons

They have done the heavy lifting of enrichment already. The final run(s) will bring the percent into the weapons grade level. They can waste a lot and directly go Little Boy route which would still have grave damage to Israel. Since they belief the 13th Imam is just a jihad away…. we will probably see this in our lifetime.

Maybe not in this old fart’s remaining lifetime, but it is certainly possible they actually will attempt to wipe Israel off the map – God forbid.

They have done the heavy lifting of enrichment already. The final run(s) will bring the percent into the weapons grade level. They can waste a lot and directly go Little Boy route which would still have grave damage to Israel. Since they belief the 13th Imam is just a jihad away…. we will probably see this in our lifetime.

Funded by Obama through the ostensibly arbitrary override of claims against the regime and prelude to the second Iraq war, the World War Spring series from Tripoli to Cairo to Kiev to Kabul. And, of course, redistributive change through progressive prices (e.g. Medicare/Medicaid/Obamacares) elected by people to compensate for their previous choices in an ouroboros progression.