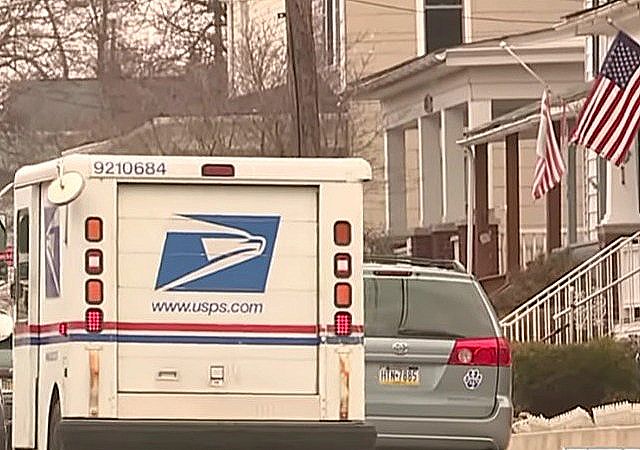 The U.S. Postal Service (USPS) will spend $9.6 billion on 66,000 electric trucks and their infrastructure in the name of climate change.

Postal officials’ plans call for buying 60,000 “Next Generation Delivery Vehicles” from defense contractor Oshkosh, of which 45,000 will be electric, Postmaster General Louis DeJoy told The Washington Post. The agency will also purchase 46,000 models from mainstream automakers, of which 21,000 will be electric.

The Postal Service will spend $9.6 billion on the vehicles and associated infrastructure, officials said, including $3 billion from the Inflation Reduction Act, President Biden and congressional Democrats’ landmark climate, health-care and tax law.

Where is the postal service getting almost $10 billion to buy these vehicles?

Well, a bill passed in February forgave much of the postal service’s $63 billion debt and gave the agency a $107 billion bailout.

Then in August, Congress gave USPS $3 billion in the $430 billion climate bill specifically for electric vehicles.

We still have slow service, only one or two people at the post offices, and incompetent mailmen. I get mail for people who live on the other side of the neighborhood at least once a week. I lost count of how many times the mailman shoved boxes into my mailbox or didn’t pick up mail even though I put up the red flag.

In Flagstaff, AZ, several neighborhoods went days without mail. The people had to reach out to the post office for answers:

“Flagstaff Main Post Office has not been delivering mail to our 65-unit townhouse community except sporadically,” said Sherri Jablonski, a resident of East Spring Meadows Circle, near Foxglenn Park.

“The week of Dec. 5 we went three days without delivery, finally receiving our mail on Dec. 10. Last week we did not receive any mail until Dec. 15,” Jablonski added.

This sporadic service was enough to send Jablonksi and a neighbor to their local post office to inquire about the delays.

“We were both given the following reasons,” Jablonski said. “It’s the holidays, we’re short-staffed, if it’s dark when they get to your mailbox unit, they will bring all your mail back to the post office.”

Jablonski said others found out one carrier needed to take time off for health reasons, people working over 12 hours a day, etc. But the mail is vital:

“My personal concern is that I mail 10-20 bill payments twice a week for my work,” she said. “I can no longer put outgoing mail in the complex mailbox as I don’t know when it will be picked up.”

“It is not the fault of the carriers,” she added. “From what I understand, it’s management.”

But hey, let’s spend billions on electric trucks instead of using the money for efficiency and restructuring the mess.

Pretty soon it will be $100 for a first class stamp.

When I was little, a first-class stamp was a mere three cents.

I still have the penny postcard the county sent my mom about my birth.

I would think your mother would know about your birth, why did the county feel the need to inform her?

Somebody official had to assign her sex, silly.

Might want to improve the service before you worry about the agenda.

In my 73 years I have had ONE instance of postal problems and it was resolved to my satisfaction.

I must be doing something wrong.

Same here. Our rural PO is staffed by one person (sometimes two, but not often) and gives very good service.

Who gives crappy service out here is UPS, who dumps all our packages at the PO instead of delivering them to the street address on the label, because they’re LAZY. And then lies about it (“there was only a PO Box number on it”). And the PO isn’t open on Saturday, so if they do it on a Friday, hope you didn’t need whatever was in that shipment that weekend.

UPS has grown awful over the years.

I have lived for over 35 years in a residential, multi-unit “security” (i.e., buzzer entry) building in Los Angeles. UPS for me has always been fine. FedEx, on the other hand, has always made hit-and-run (i.e., after 30 seconds) attempts at delivery, so FedEx’s delivery success has been about 60%.

Hate to admit it, but same here, although I only go back 66 years. Living in mostly small towns and rural settings, USPS service was mostly excellent. Of course we are paying for it.

For an agency that is perennially on the cusp of bankruptcy, this seems like an enormous waste of money.

But hey, all the proggies can have a virtue signaling circle-jerk, so there’s that.

Why the hell does the postal service even have $10 billion to squander like this.

99% of the crap that is moved through the mail is junk mail spam.

I discard 90% of the mail in the closest trash can. And I certainly don’t need to do it every day. I do use the USPS but mostly for small packages.

This will never happen. They won’t be able to buy all those EVs at that price.

Even if they do get them the lack of range and inability to quick charge will be a disaster.

It’s a losing operation every year they tell us.
Replacing every vehicle will put them well underwater.
But then just as in the Russian Revolution, the Bolsheviks thought crashing the monetary system was towards their goal of no money being needed.

So no chance the service will improve.

Neither snow, nor rain, nor heat, nor gloom of night…. but a dead battery sure will

They beat up those vehicles pretty bad since every route is stop-go-stop-go all day. I’m a little leery of a mil contractor providing the vehicles, though. I’d have to see specifics. I know a lot of rural carriers use their own vehicles since it’s part-time, so I wonder if these vundervagons will be available for purchase by ordinary mortals at a reasonable price. There’s a market for local delivery vehicles, but it would not shock me if USPS locked in the contract to the point where making a model for conventional sales would be impractical.

(I expect GPS tracking, a continuous connection to the internet, and possibly an IP based phone system included at the least.)

“it would not shock me if USPS locked in the contract to the point where making a model for conventional sales would be impractical.”

In the ’80s, I joined a start-up minicomputer company as part of their two-man DC sales office. The salesman, experienced in commercial sales in the deep south, looked forward to getting his hands on some fat federal contracts. For half a year, we pitched agencies like the FAA, the Pentagon, the World Bank, and whatever, but never got a callback.

I kept telling my salesman he didn’t know how government sales really worked, and he was wasting a lot of premature effort. “The fedguv buys trailing edge technology, period. If you want to sell our leading-edge gear to the government, you get a backhoe, dig a big hole, and bury a few dozen of our computers in it. Five years from now, dig them back up, and the feds will beat each other up to get them.”

Well, three years pass, and the very week our company is scheduled to cease sales of its version 1 hardware systems (we were just announcing v3), the USPS cuts a massive contract for 256 of them (about $300M). Our company had zero wish to perpetuate the old system, manufacture and stockpile spare parts, and so on, so they offered them our v2 systems — four times as fast — at no extra charge.

“No,” said the Post Office, “you’re trying to cheat us. The original hardware, or nothing.”

I can’t think of a better testing ground for bleeding-edge electric vehicles.

We are at a point where it no longer matters. Today the Republicans gave the Democrats everything they wanted in spending, and then some. The GOPe is not even pretending. let them spend and waste all they want. It just means the final collapse comes sooner.

From pony express to phony excess.

if it’s dark when they get to your mailbox unit, they will bring all your mail back to the post office.

That’s absurdly lazy. Have they ever heard of flashlights? It wouldn’t surprise me if that neighborhood is at the end of the carrier’s route, and they’re deliberately slowing deliveries to engineer that result.

What the hell ever happened to “dark of night?”
Here’s hoping that the combination of EVs and “snow nor rain” teaches “these couriers” a lesson.

I bet a human foot print is smaller than a carbon footprint. Maybe just buy a school bus (a short one will do) and drop them off in their neighborhood to wander round rather than each of them having a vehicle which is stationary 7.5 hrs of their shift (based on observations in my neighborhood).