Dr. Andrew Bostom: “My ‘offense’ was not abiding an ‘accepted narrative’ [regarding Covid] regardless of how warped that narrative was.  Twitter’s behavior, certainly before Elon Musk took ownership of the company, epitomizes the triumphal (for now) anti-scientific, ethical, and legal cretinism of today’s major social media platforms.” 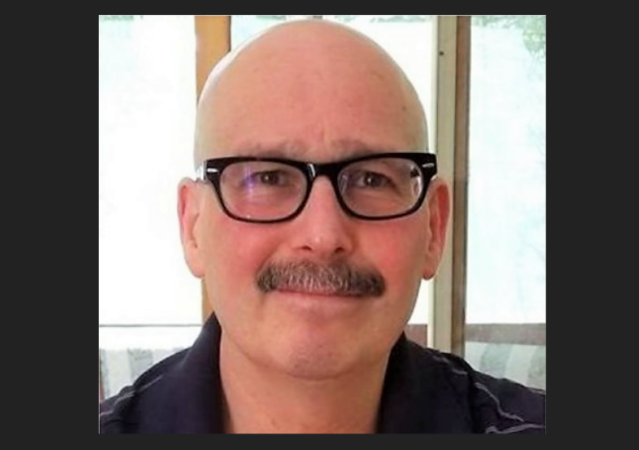 You may remember Andrew Bostom, a Rhode Island physician and researcher with in impressive CV who was suspended on Twitter after tweeting a link to a peer-reviewed article from a reputable science journal about possible negative effects on sperm from the Covid-19 vaccine.

Dr. Bostom went public with his suspension at Legal Insurrection on June 22, 2022, I’m An MD Suspended By Twitter For Tweeting A Link To A Scientific Article On COVID-19 Vaccine Lowering Sperm Counts.

…. Until this morning, I had a very active Twitter account with a large following through which I shared scientific information, as well as my personal views.

This morning (6/22/22) I awakened to learn that overnight Twitter had summarily and simultaneously locked, and then suspended my account for this “offending” tweet from Father’s Day, 6/19/22: 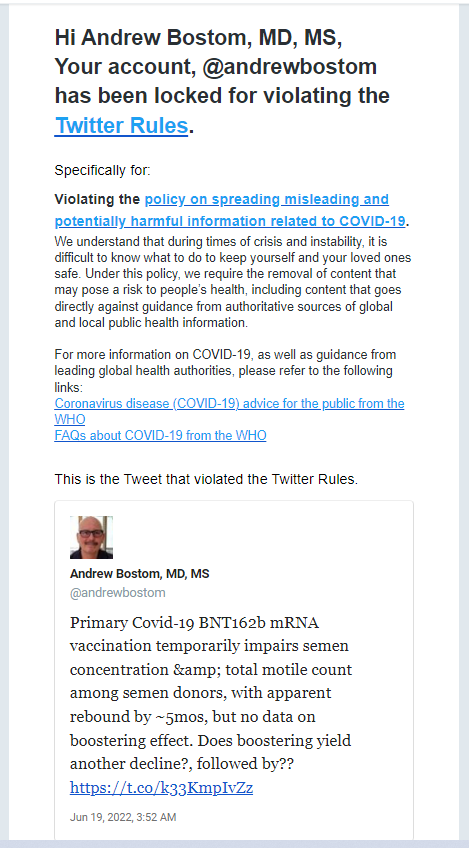 … The tweet in question contained data from a recent peer reviewed publication in the journal Andrology, with the eponymous title, “Covid-19 vaccination BNT162b2 temporarily impairs semen concentration and total motile count among semen donors”…. The Journal Andrology is highly respected and published through a joint effort of American and European scientific associations

The study was a straightforward, serial analysis of young male Israeli semen donors evaluating the potential impact of Pfizer’s covid-19 mRNA vaccine on their sperm concentration (count), and related functional measures, “15-45 [Time 1],75-120 [T2], and over 150 days after [T3] vaccination.”

What did the investigators find?

Again, quoting their publication, verbatim, based upon what the authors defined, a priori, as the primary statistical analysis (i.e., “ [a] 1) generalized estimated equation model (GEE) was used for repeated measures analysis,” which is indeed the most appropriate method!):

“sperm concentration was significantly lower due to decrease of -15.4% (confidence interval -25.5%–3.9%) compared to [Time zero/baseline] T0 (p=0.01). Moreover, [total motile count; how sperm moved] TMC percentage change reduction of 22.1% was significantly lower compared to T0 (confidence interval -35% – -6.6%, p=0.007) as well. Although concentration and TMC were reduced also on T3, these values did not reach statistical significance.”

My suspension is yet another example of Twitter’s arbitrary, Lysenkoist breaches of informed public discourse on covid-19. The suspension must be reversed, and my account restored fully intact, immediately.

We continued to follow Dr. Bostom’s efforts to get restored to Twitter after retaining the lawyer who successfully sued Twitter for Alex Berenson, Physician Threatens To Sue Twitter Over Suspension For Tweeting Scientific Article On COVID-19 Vaccine Lowering Sperm Counts (UPDATED). Dr. Bostom initially was restored, but then suspended “permanently” — until Christmas this year when he was restored.

The most recent release of Twitterfiles revealed that Twitter worked with government officials to silence dissenting medical views related to Covid, and one of the victims was Dr. Bostom, who was permanently suspended even though Twitter found 4 of his 5 flagged tweets not to be misinformation and the 5th flagged tweet in fact was accurate. Leslie mentioed Dr.Bostom’s tweet in her post, Twitter Files COVID Edition: How Twitter Rigged the Covid Debate With Help From the White House:

Dr. Andrew Bostom, a Rhode Island physician, was permanently suspended from Twitter after receiving multiple strikes for “misinformation.” The suspension is an example of the free-speech-destroying level of bias in the covid review process on the platform.

32. That this tweet was not only flagged by a bot, but its violation manually affirmed by a staff member is telling of both the algorithmic and human bias at play. Bostom’s account was suspended for months and was finally restored on Christmas Day.

I want to thank journalist David Zweig for exposing the grotesque injustice of Twitter‘s suspension of many accounts, including my own, due to alleged covid-19 “misinformation” i.e., evidence-based data rebutting the warped, but “accepted” covid-19 narrative. The fact that Twitter itself found 4/5 of my tweets which garnered “strikes” were not “misinformation” raises the question as to why my account was ever suspended, let lone how that unjustified suspension persisted for 5-months. Indeed as Mr. Zweig also points out, the lone tweet ultimately deemed “misinformation,” was accurate data from CDC demonstrating that pediatric influenza mortality during the past ~decade often greatly exceeded pediatric covid mortality in 2020, and 2021, per annum. My “offense” was not abiding an “accepted narrative” regardless of how warped that narrative was.  Twitter’s behavior, certainly before Elon Musk took ownership of the company, epitomizes the triumphal (for now) anti-scientific, ethical, and legal cretinism of today’s major social media platforms.  Hope springs eternal Mr. Musk will succeed in re-creating Twitter as a true uncensored platform for the free exchange of ideas.

I didn’t know about this, but I have greatly enjoyed his books on Islam.

I don’t tweet much, but I know that FB is just as quick to drop the ban hammer on anything that doesn’t toe the “covid” line or even hints that vaxxes aren’t all they’re cracked up to be. I’m currently in the middle of a 30-day FB jail stint for sharing this gem of a link advocating vaccine choice. Never mind the conclusion is based on researchers who have studied the subject for decades – nope, the minimum wage twerps at FB are quite “capable” of determining that said researchers are full of hooey and represent “dangerous misinformation” that must be stifled at all costs.

I am so sick of the infantilization and the downright refusal to acknowledge that honest, robust debate is essential for a functioning republic. This is far more serious than “those meanies just won’t let me post on platform X” – democracy dies not in darkness, but by tyrants and fascists all too willing to stifle and suppress speech they don’t like. Hence the primacy of the 1A. The harder they come after us for “misinformation,” the more we have to shout it from the rooftops.

Or instructions from their government masters, passed down through the corrupt @FBI.

Just don’t mention biology to them.

FB is just as quick to drop the ban hammer on anything that doesn’t toe the “covid” line or even hints that vaxxes aren’t all they’re cracked up to be.

It’s not just Covid. Try having fun with global warming:

I know a girl, lives right around the corner,
She works all night, she’s a disinformer,
She whisper in my ear, first thing in the morning,
‘Whatever happened to global warming?’

That, and several variants, immediately draw FB Karens who plaster stuffy instructions alongside your post leading you to the Official Opinion of the Party on climate change.

That isn’t really accurate to state that the policy alternatives were all guesswork and one choice was as good as another. That defies not only common sense but the existing body of knowledge on some very basic things.

Masking was already known to be ineffective; every study prior to, during and after Covid hit shows that the masks are not making any appreciable difference in transmission. When we factor the known detrimental impacts of masks and their real world use they have a net negative impact on health. The six foot social distance rule was made up out of whole cloth. No scientific basis at all existed for this.

Just those two facets of Covid masks and social distance caused irreparable harm and we knew it was bunk. Our public health establishment demanded them anyway. That led to creation of a narrative of fear. Bottom line is there was plenty of existing data to refute the Covid policy alternatives chosen but it was suppressed and censored because it was accurate and not a crank alternative theory.

Dr. Bostom was a regular Thursday guest on In The Dugout with Mike Stenhouse from the early days of COVID. He was the ONLY sane medical voice in Rhode Island in the early days by first making us aware of the importance with cycle threshold (c/t) values.

There appeared to be a shadowed effort by the Rhode Island Department of Health which blindly followed the CDC to not only dismiss his efforts to educate but to remove him from view. RIDOH no longer collected or had in its possession c/t data from test labs shortly afterwards.

The attempts to silence him was more widespread than social media.

I never watched YouTube until the pandemic. At its beginning a goodly number of world renowned experts were opining on various channels about the hyping of the virus and the ineffectiveness and danger of the new vaccines. These men with decades long distinguished careers were shocked by their cancellation and vilification. This is an evil, corrupt world. Henry Kissinger recently opined that we were headed for doom because of the loss of good, deeply literate men in positions of leadership. Worse is yet to come, much worse before things might get better.