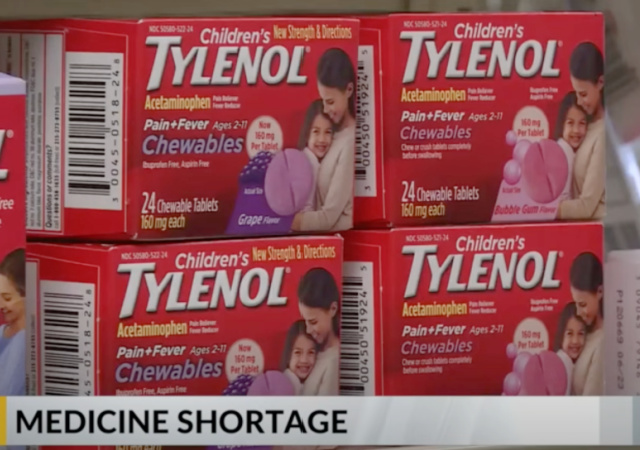 Legal Insurrection readers may recall that I reported on the surge in pediatric cases of respiratory syncytial virus (RSV) in August.

While COVID-19 numbers may be rising among children, it is also true that we are seeing a surge of Respiratory syncytial virus (RSV) that is resulting in hospitalizations. RSV is a common respiratory virus that usually results in mild, cold-like symptoms. Most people recover in a week or two. Still, RSV can be severe, especially for infants. It is the most common cause of bronchiolitis (inflammation of the small airways in the lung) and pneumonia (infection of the lungs) in this country’s children younger than one year of age.

Not surprisingly, cases of influenza and covid variants are spiking as we enter the cold and flu season. This is referred to as a “tripledemic” and has resulted in shortages of children’s pain medication as parents struggle to comfort and heal sick children.

Medicines to lower fevers, clear congestion and ease aches and pains are in high demand this winter as the U.S. is experiencing a surge in pediatric cases of RSV, influenza and Covid-19. Parents and caregivers are struggling to find over-the-counter fever reducers such as acetaminophen (Tylenol) or ibuprofen (Motrin, Advil) as well as amoxicillin, an antibiotic prescribed to treat common childhood ailments such as ear or upper respiratory infections.

Sales of children’s over-the-counter medication are up 80% compared with the same four-week period a year earlier, totaling more than $86 million, according to market-research firm IRI. Inflation has also contributed to higher dollar sales, but it is mainly rising demand that is causing the shortages, IRI said.

Parents and caregivers also have fewer pediatric pain relievers to choose from, with the number of options down 7% compared with a year ago.

This shortage appears to be related to a surge in demand rather than supply chain problems.

Drugmaker Johnson & Johnson says it is not experiencing widespread shortages of Children’s Tylenol, but the product may be “less readily available” at some stores. The company said it is running its production lines around the clock.

“At this point, it’s more like toilet paper at the beginning of the (COVID-19) pandemic,” Dillon said “You just have to look in the right place at the right time.”

One has to wonder if part of the problem isn’t more fallout from pandemic restrictions and covid paranoia put forth by public health bureaucrats and supported by a misinformation-infused American press. Regular exposure to germs builds up immune systems, and children’s immune systems have been over-protected and not built up properly over the past two years.

“We sometimes tend to think of bacteria and viruses as being all bad,” Dr. Friedlander. “But we have a relationship with these microorganisms that sometimes can be beneficial. We’ve found that kids who go to daycare, although it can be frustrating to get numerous viruses, are less likely to develop allergies.”

People who live on farms, such as the Amish, also are less likely to develop allergies. “It would be nice if we knew exactly what it is about that lifestyle that protects them from allergies. One day we hope to figure it out,” Dr. Friedlander says.

The common cold is another example of how exposure confers a measure of protection. Doctors right now are seeing a spike in upper respiratory viruses and sinus infections, which is likely due to a lack of exposure to viruses as people wore masks and socially distanced during the pandemic, Dr. Friedlander says.

It’s going to be years before the damage related to the pandemic response can be assessed and resolved.

When are we going to demand rather than kiss chinas ring, this stuff is made in the US for security purposes if nothing else.

We don’t have enough supplies for our own kids but are bringing other country’s kid across the border as fast as we can and providing for them at a phenomenal rate.

Exactly, they have our hospital beds, diapers, pain meds and a hell of a lot more

Got into a verbal fight with my Congressman, John Carter’s phone answering person, tired of “The congressman is writing very stern letters to Biden”

I laughed in her face…

Being preppish has lots of comforting moments. Six medicine cabinets. plus a pet vet cabinet, plus a farm vet stockpile. Never let a bottle or jar go empty without immediately buying a replacement.When you need it it may be too late. The tradeoff is expiration dates, which are mostly garbage anyway.

The freezer takes care of the medicine aging issue.

?Not a supply chain problem, but a surge in demand?

Somebody running a real business would be looking to grab distribution and market share when demand is up, and competitors meeting it jammed up.

It’s like operations in the govt-orchestrated health care system isn’t about meeting the needs of the livestock.

Tylenol is always a bad idea and it does nothing for these diseases which are serious inflammation of respiratory tissues. The proper medication is a child’s dose of ibuprofen, and wanting that 82 mg aspirin.

Aspirin is a terrible choice, causes irreversible damage to children

Only in certain instances. Remember that it was the only option for those of us born before Tylenol and ibuprofen, and the vast majority of us seem to have been just fine. And at least we didn’t risk permanent kidney damage.

Reye’s Syndrome… THE reason to not give aspirin in children… period. All of the ansaids have some risks. Tylenol ..used appropriately is the best option. I have seen suicides with both aspirin and Tylenol.

Hmm, a shortage in children’s medications is a strange thing to see with a pedophile in the white house.

Note unless the Tylenol is only available there or in a Delaware basement.