Seven people have been convicted on charges related to the plan to kidnap Whitmer. 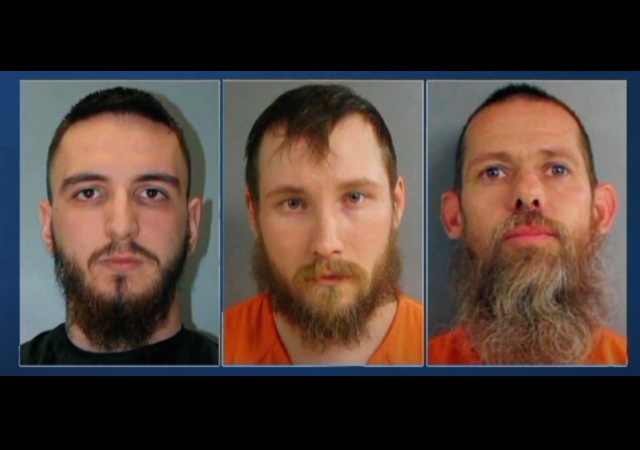 The three men were convicted of providing material support for a terrorist act and belonging to a gang.

In August, a Michigan jury found Adam Fox and Barry Croft Jr. guilty of conspiring to kidnap Whitmer and conspiring to obtain a weapon of mass destruction.

In April, a jury acquitted Daniel Harris and Brandon Caserta after almost two years in prison.

The suspects in the plot have claimed the FBI set them up. Documents revealed at least 12 FBI confidential informants had a larger role than reported:

An examination of the case by BuzzFeed News also reveals that some of those informants, acting under the direction of the FBI, played a far larger role than has previously been reported. Working in secret, they did more than just passively observe and report on the actions of the suspects. Instead, they had a hand in nearly every aspect of the alleged plot, starting with its inception. The extent of their involvement raises questions as to whether there would have even been a conspiracy without them.

A longtime government informant from Wisconsin, for example, helped organize a series of meetings around the country where many of the alleged plotters first met one another and the earliest notions of a plan took root, some of those people say. The Wisconsin informant even paid for some hotel rooms and food as an incentive to get people to come.

The Iraq War vet, for his part, became so deeply enmeshed in a Michigan militant group that he rose to become its second-in-command, encouraging members to collaborate with other potential suspects and paying for their transportation to meetings. He prodded the alleged mastermind of the kidnapping plot to advance his plan, then baited the trap that led to the arrest.

I guess it’s not “entrapment” if it’s for a “good cause” like getting rid of pesky political opposition.

Same way that it’s not a violation of 1A for the feds to use Twitter as a cut-out to censor, shadowban and deplatform citizens to rig an election.

“Hey, Randy Weaver, would you cut this shotgun barrel off for me right here on this line? Because like an ID-less minority, I’m too stupid to know where to buy a hacksaw.”

None of those guys look like FBI types. Must be guilty.

“The extent of their involvement raises questions as to whether there would have even been a conspiracy without them.”

That’s not a question. That’s an absolute statement of fact. Without the FBI’s direct involvement and pushing, you’d have a half-dozen guys down at the bar playing pinball and grouching about the government.

How is gang membership a crime? Freedom of association

Good question. It isn’t, so there’s something missing from the story.

Sure these guys were dumb. But dumb, and dumb talk, should not equal near life sentences in a case where no one was harmed. This small, powerless, and inept “gang that couldn’t shoot straight” were never much of a threat to anyone. The real threat comes from a very large and very powerful “gang”, who can and do use their power to “conspire” to entrap their political targets. Namely, the DOJ, the FBI, and the “Judges in their pocket”. This was a political prosecution.

Sorry Milhouse. My last reply was for “actionjksn”, not you. But yes, something is missing from the story. 29 years for “gang” membership?

I wondered about that as well. If that were true, why the hell can’t they use that law to clean up inner cities?

Because the gangs of the inner cities, like MS13 coming across our boarder helps sell their Plans..

It’s like a freaking playbook with these FSB-wanna be entities.

The Canadians had all kinds of plants running around trying to instigate violence during the Trucker protests.

Honestly if that’s your career choice- I hope you have a nice dirt nap in a shallow cot next to Jimmy Hoffa.

What did the FbI informants who egged this on get?
Raises or promotions?

Remember this is what the FBI does and you need to make your plans accordingly.

I am sick to death of hearing how the rank and file agents are all decent guys and it’s the corrupt leadership to blame. It took a lot of rank and file agents to lure these morons into a show kidnapping. How do they live with themselves, booze, drugs, self-hatred and rationalization?They are every bit as much scum as their masters.

Some of the harshest and cruelest sentences I’ve ever heard of for a handful of guys who never kidnapped anyone. Or actually harmed anyone.

The FBI literally talked these dumb guys into agreeing to do this, they didn’t even want to. This is the kind of people that work in that organization. They also took serious actions to interfere and change the way the election was going to go. Twitter and Facebook went right along with their requests. That’s what kind of people these are. They basically took a bunch of people’s lives in this case. They would have never done this without the FBI.

Just remember whenever someone is trying to talk you into a crime it is probably the FBI so just say no. The guys were dumb for letting themselves get talked into it but the hardcore coercion still happened.

Sure these guys were dumb. But dumb, and dumb talk, should not equal near life sentences in a case where no one was harmed. This small, powerless, and inept “gang that couldn’t shoot straight” were never much of a threat to anyone. The real threat comes from a very large and very powerful “gang”, who can and do use their power to “conspire” to entrap their political targets. Namely, the DOJ, the FBI, and the “Judges in their pocket”. This was a political prosecution.

Whitmer-events (i.e. entrapment, deflection from planned/parenthood) are how Watergate was billed. Democracy dies in darkness h/t WaPo. The “burden” h/t Obama of evidence is aborted at the twilight fringe.

This has a relationship to Alex Jones judgement.

Also the notion that ‘they’ are coming for our guns.

They don’t have to.

Slam enough people in a very public manner and most people who are supporting a family will be cowed. The risks will outweigh the possible benefits. (See: Iranian protesters)

To maintain control, the state must exercise terror. With its corruption, it must cast a wider and wider net. At its core are the true believers, the fellow travelers, who are insulated from being caught… freed of consequences .. they can do as they wish. Looking at The Declaration of Independence, today’s leviathan makes King George III and Lord North almost blameless.