The judge declared a mistrial on the two men the jurors couldn’t reach a decision on. 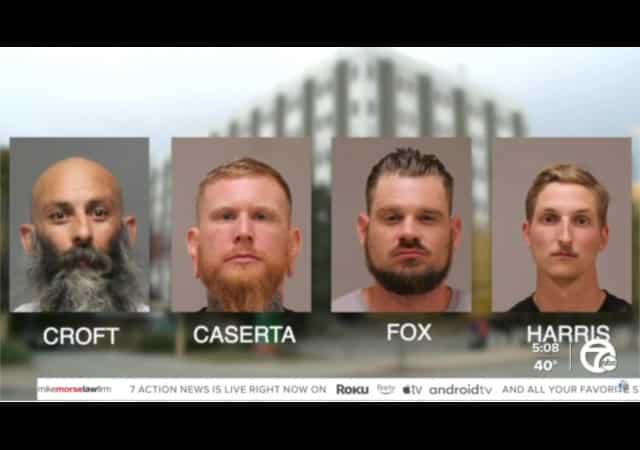 The jurors acquitted two men accused of plotting to kidnap Michigan Gov. Gretchen Whitmer and remained deadlocked on the other men. The judge declared a mistrial:

Jurors Friday acquitted two men Friday accused of plotting to kidnap Michigan Gov. Gretchen Whitmer and deadlocked on charges against the two alleged ringleaders, delivering a staggering blow to the government in one of the largest domestic terrorism cases in recent U.S. history.

The jurors in the Gov. Grethen Whitmer (D-MI) kidnap plot trial reached a verdict on some charges but remained deadlocked on others.

It is the fifth day of deliberations. Chief U.S. District Judge Robert Jonker told the jurors to deliberate more on the charges “in hopes of reaching a unanimous verdict.”

The jurors received the pennies “offered as evidence on an explosive earlier in the trial” on Thursday before they went home.

The jury is considering 10 charges in the case: one against Brandon Caserta, two against Adam Fox, three against Barry Croft Jr. and four against Daniel Harris. The men all face the main charge of a kidnapping conspiracy; the other counts are related to explosives and a firearm.

Pennies taped to a commercial-grade firework were intended to act like shrapnel, investigators said.

A homemade explosive was detonated during training in September 2020, according to evidence, about a month before the men were arrested.

The prosecutors allege the men developed the plot because Whitmer shut down the state over COVID and anti-government sentiments. The defense said the prosecution’s main witness, Dan Chappel, “was the real leader, taking direction from the FBI and keeping the group on edge while recording them for months.”

Were the defendents able to get any entrapment evidence into the record?

From what I followed on Julie Kelly, just barely. The prosecution had a regular parade of the usual suspects, while the defense was blocked at every turn and only had three, plus one of the defendants testified. There’s two more trials, I think, one state and one federal so who knows what the prosecution will drag out next.

Being reported that it’s not guilty for 3 of then and hung jury for the ‘leader.’

Looks like they just didn’t buy the FBI bullshit. This wqs such a laughable case of entrapment.

Remember. If you are ever part of a group where one guy consistently agitates for violence and crimes., that’s the Fed plant.

Hmm looks like it was 2 not guilty 2 mistrial, that’s why you should always be careful of early reporting.

But the material point stands.

Functionally the jury found the FBI guilty of entrapment. And I’m not even sure that the evidence of the unbelievable shit like straight up telling their informant to lie were admissible in court.

I doubt the government tries again but if they do, the damage is completely done.

These two can testify at the trial of the other two under oath and because of double jeopardy and the idiot lawfarers (who overcharged), they have very little risk of incrimination.

Regardless if they testify or not, they can still tell their story now that the case is behind them and shame the system, hopefully sparking some reform if we can get the swamp out of the way.

I learned that in college. When the Kent State shootings took place, at my school, San Diego State College, we had some radical running around claiming that he had enough dynamite to take down the Coronado bridge. One of our people happen to be a Vietnam veteran, and then interrogator. Five minutes in a private room with the student union got the guy to fess up. A Fibbie.

Please tell me that electrodes, water jugs, and hoses were involved.

In a just world, the scumbag FIB agents would be charged, convicted and buried under the prison after a nice unsupervised trip through the yard.

The guy who led this entrapment was promoted.

one of the largest domestic terrorism cases in recent U.S. history
I think this verdict means you can actually put the scare quotes around “domestic terrorism”.
Also, why “recent”? What ‘domestic terrorism’ case are you thinking of that was bigger? And why did you not want to go far enough back to include that one?

(None of that is directed at Mary, but at the authors she quotes.)

I’m thinking the Murrah Building for one.

The FBI are the bad guys in this case. Too bad they are not held to account.

Seriously, can anyone think of a case with political implications in the last couple of decades where the FBI were NOT the bad guys, working for the Left/Democrats? It’s become one of the constants in our political system, that can be a working assumption when you first hear of such a case, unless actively disproved. Interestingly the media, whose choice of sides is blatant, has been pushing shows where the FBI are the heroes. I wonder if there is an interrelationship?

The FBI has been corrupt since the get-go. Read any bio of J. Edgar Hoover. His name is on their building.

These men were followers along for the ride. It was the FBI that plotted it, planned it, funded it, organized it and led it.

This case from its beginning has reminded me of the Huttaree affair 10-15 years ago. That was also an obvious FBI setup for publicity purposes, and it blew up spectacularly when they tried to prosecute.

I am very pleasantly surprised, I read the story when it broke about FBI entrapment, but thought it didn’t matter and those men could all called walking dead.

I hope this verdict increases the skepticism of the groupthink perception of Jan 6th.

Richard Jewel is my favorite movie.