The story was everywhere just a few weeks ago, but now? Nowhere. 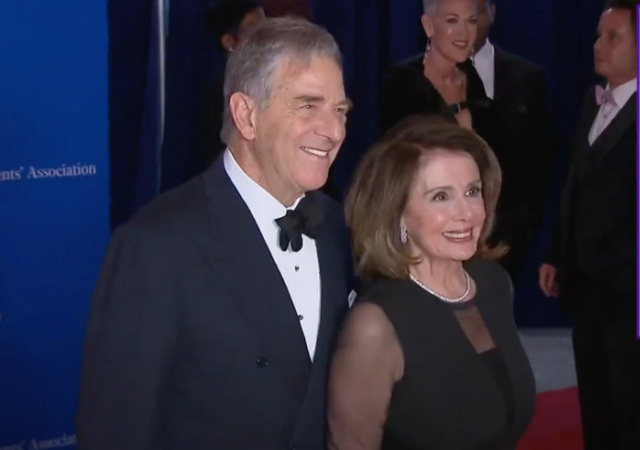 Remember the attack on Paul Pelosi? It happened a few weeks ago, just before the midterms, when the media told us that the BLM-supporting nudist who lived in a San Franciso commune was somehow a right-wing Trump supporter.

Now the story has vanished.

A search of Google News provided this report from ABC 7 in New York as the most recent news. It’s from November 15th:

David DePape, the man accused of attacking Speaker Nancy Pelosi’s husband, has entered a plea of not guilty to federal charges stemming from the brutal assault and break in on Oct. 28.

DePape, 42, was indicted by a federal grand jury last week on charges of “Attempted kidnapping of a federal employee” or officer and “Assault on an immediate family member of a federal agent and employee.”

Some details in the case even seem to be getting shielded from the public:

Boy, they sure don't want any of the evidence in the case against Paul Pelosi's attacker to be made public. Very strict protective order recently filed: pic.twitter.com/lwhMqtFdyb

Judicial Watch is trying to get answers but isn’t having much luck:

Judicial Watch announced today that the San Francisco district attorney refused to provide documents and video of the police activity at the home of Paul Pelosi, husband of the Speaker of the House, where David Wayne DePape was arrested following an alleged assault on October 28, 2022.

The two persons present at the Pelosi home when the SFPD arrived where [sic] Mr. Pelosi and Mr. DePape. Please see the online posted document that reflects that Mr. Pelosi was the only person in the home at the time of the attack. Seehttps://www.nytimes.com/interactive/2022/11/01/us/david-de-pape-motion-to-detain.html. You can obtain an official copy of this court record from the Superior Court.

In its November 2022 request to the district attorney, Judicial Watch noted a news report stating that news organizations had been rebuffed on similar requests and, pursuant to the California Public Records Act, asked for, in addition to the recording and camera footage: All records of communications, including emails and text messages, between the SFDAO [San Francisco District Attorney’s Office] and the San Francisco Police Department concerning the incident. It also asked for communications with several federal agencies, including the Justice Department, the Capitol Police, and the FBI. Judicial Watch also asked for the identities of the persons at the Pelosi home at the time of the incident.

A lot of folks on Twitter are asking questions about this.

Whatever happened to the Paul Pelosi attacker?

Why haven't we seen any video from the Paul Pelosi incident yet?

What happened to the Paul Pelosi/hammer guy story?

The Paul Pelosi story feels like 5 Jussie Smolletts ago. pic.twitter.com/b2GejhJlBO

PauliP case almost exactly same as racist graffiti supposedly painted on LeBrons door in Ritzi LA. MSM went crazy for a while but totally backed off when the facts did not conform to the MSM desired outcome/narrative.

Same with the “mass shooting” stories that don’t fit the lefty narrative. Gone from the MSM.

Remember the worse mass shooting in American History over in Las Vegas? Wonder what’s going on with that investigation…

The media wing of MINITRU got their orders and “disappeared” the story.

There has been such a dearth of information forthcoming I don’t know whether it was a ball peen, sledge, claw or tack hammer. Maybe it was a wooden gavel?

Not sure I really want to see pictures of the “items” they took from the house. It would just taint the holiday season.

Yes. And you can’t unsee something.

Their Propaganda got out and we knew from beginning it was a private squabble, but they ran it was a MAGA attack on Nanzi and after that who cares?

Not good. Could be a whole cabal of illegal alien Canadian Berkley MAGA nudist insurrectionists out there now operating under the radar. I hope the FBI hasn’t lost focus.

They’re probably sending the Canadian back to Canada to get euthanized.

I hope not. I was looking forward to his testimony. Fully clothed if there is any justice.

DePape is sharing a tropical holding cell in the Caribbean with Epstein and the guys who offed Seth Rich, Vince Foster, and Scalia.

I would guess that Paul is still getting “hammered” in the traditional sense.

Now that he knows Nancy will be around more? I doubt he will leave his vineyard.

I think that explains all the secrecy. Paul Pelosi is on probation for DUI. A common condition of such probation is no alcohol consumption whatsoever. He was probably totally hammered when that lowlife broke in. Undoubtedly, the hospital tested his BAC. Paul may be the victim of a violent attack, but he still violated his probation, and by rights should serve out his entire suspended sentence. Obviously, they can’t let that cat out of the bag.

I like it. Although this theory can stand alone, it doesn’t necessarily eliminate other theories that also address the blackout on the details surrounding the event. It certainly adds another factor to consider.

I hadn’t heard the outcome of that case and was unaware it went to a judge already.

Guessed also in beginning Depape would never see a courtroom as it would make the real story get out.

Could this be a story of a love that dare not speak its name?

We all know this was a sexual role play gone wrong. Paul Pelosi is batting for the same team and Nancy Pelosi, for all her DIE and LGBT inclusivity nonsensical language, don’t want anyone to know her husband is a fairy.

Don’t know if that is true or not. I do know he is rich off of insider trading courtesy of his squeeze. The lack of information and how hard his lawyers are fighting to keep everything secret sure is fishy, though.

Miguel Almager did not kill himself.

I talked with a gentleman high up in security for the state dot right after the incident.
1. He said security cameras are not monitored and and security is not provided at Polisi house when Nancy is not there as Paul is involved in activities meant to be kept secret
2. He told me Paul was the one who opened the door

Weeks later I find number 2 to be true and also pretty sure no security was watching the Polisi house.

I failed to ask him about the broken door….darn it!