The states wanting to keep Title 42 in place will argue on the merits in February 2023. 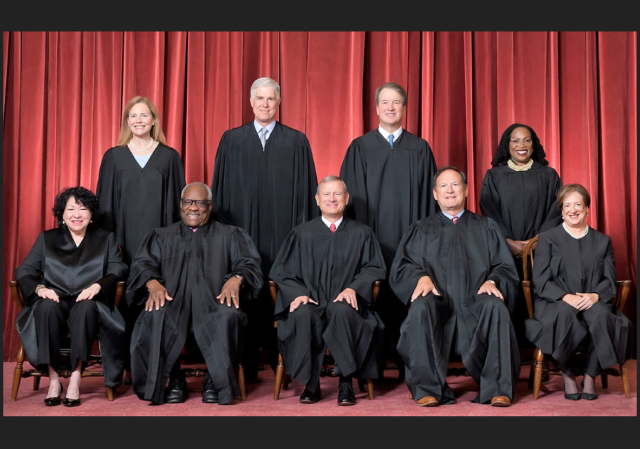 The Supreme Court halted the termination of Title 42 as legal challenges continued. The vote was 5-4.

Title 42 has been in place since 2020. It allowed authorities to expel migrants due to the pandemic.

We’ve seen an increase in migrants every month since Biden took office in January 2021. We’ve also seen migrants camp out at the border, anticipating Title 42 going away.

In November, Judge Emmet Sullivan of the U.S. District Court in Washington, DC, ruled the American government cannot use Title 42 to expel migrants based on public health. Sullivan agreed with the Plaintiffs that Title 42 was “arbitrary and capricious in violation of the Administrative Procedure Act.”

Like Roberts’ stay, this decision is NOT based on the merits. The states wanting to keep Title 42 in place will argue on the merits in February 2023:

This stay precludes giving effect to the District Court order setting aside and vacating the Title 42 policy; the stay itself does not prevent the federal government from taking any action with respect to that policy. The Court’s review on certiorari is limited to the question of intervention. While the underlying merits of the District Court’s summary judgment order are pertinent to that analysis, the Court does not grant review of those merits, which have not yet been addressed by the Court of Appeals.

The Clerk is directed to establish a briefing schedule that will allow the case to be argued in the February 2023 argument session. The stay shall terminate upon the sending down of the judgment of this Court. The order heretofore entered by THE CHIEF JUSTICE is vacated.

Justices Sotomayer and Kagen voted to deny but did not issue an opinion.

Justices Jackson and Gorsuch also voted to deny the application, with the latter writing:

But the current border crisis is not a COVID crisis. And courts should not be in the business of perpetuating administrative edicts designed for one emergency only because elected officials have failed to address a different emergency. We are a court of law, not policymakers of last resort.

I don’t know, sir. The way everyone acts we’re still in a COVID pandemic!

There is a border crisis, but no one in this administration is doing anything about it.

Maybe the Democrat-controlled White House and Congress should have done something in the past two years. Just saying!

BREAKING: Today, the Supreme Court of the United States granted a request by Arizona, Missouri, and Louisiana and a coalition of States to prevent the termination of Title 42 and help secure our border.

There is, IMO, an overly myopic focus on preserving the use of the authority of Title 42 to reduce the flow of people into the US. The authority is derived from the health considerations present during the Covid pandemic. At some point the pandemic ends and so does the justification for use of Title 42. What then? The only mild restraint on the flow at the border during the Biden admin has been the inconsistent application of Title 42 authority. Where’s the plan from the WH about what happens when they can no longer use it?

Frankly the WH doesn’t have a plan and every serious person understands that. If they did there would have been funding requests for additional admin law judges to hear the backlog of asylum claims. There are some estimates that project a five year backlog. There would have been a request for additional CPB officers and at a minimum linking the completed sections of border wall around our population centers.

IMO, ultimately the end of Title 42 will counter intuitively be a net positive b/c the scope of the catastrophe will be too large to hide. Legacy media will be reluctantly dragged into coverage of the tens of thousands pouring over our borders each week. The border cities and States are past the saturation point. The tens of thousands have to go either into holding camps or be transported in much larger numbers to more distant locations which have largely avoided the level of impact that border areas have endured the past two years.

Those things will be very noticeable as we saw with a single plane load of illegals into Martha’s Vineyard and a few thousand each to Chicago, NYC, DC and Denver. The oh so virtuous denizens of the oh so enlightened blue enclaves will finally come face to face with the very real consequences of their policies. Not because they are good but because there won’t be any way to avoid it any longer. The border States are quite literally out of resources and room to house and feed the influx.

“Frankly the WH doesn’t have a plan….”

Of course they have a plan: pack the nation with a permanent underclass and crime wave. It’s over.

Since it is ‘over’ is that your last post before you quit?

I agree with you. They want to stay in power by using these people politically. Once Biden abandoned Americans (and allies) in Afghanistan AND then lied about it, I assumed that no cruelty was beneath him. So, here you are. No borders. Drugs. Human trafficking. Ultimately, it will help bankrupt America.

“But the current border crisis is not a COVID crisis.”

No border enforcement = no sovereign nation.

Not bad advice, then, to buy more guns and ammo, as the chaos and anarchy creep closer to our own neighborhoods.

Pray for those patriotic citizens facing the Democrat-induced decay of our southern border – will quickly get worse for them.

And also for the remaining patriots and other responsible citizens still trying to hang on in the Democrat-dominated urban areas.

“Justices Sotomayer and Kagen voted to deny but did not issue an opinion.”

They form their opinions first, then when they have to issue something publicly they have their clerks try to invent some justification in support.

Jackson and Gorsuch *may* be correct that the issue is no longer Covid (though with 250 million chinese testing positive last month, and also reports of large numbers of Chinese coming to the US illegally through our southern border there’s a strong case that they are dead wrong).

Sullivan’s opinion was, of course, garbage. And, the Gorsuch/Jackson claim above has nothing to do with what Sullivan wrongly decided.

Its “arbitrary and capricious” to have closed the border, to illegal aliens only, during a worldwide pandemic that killed millions of people. Right.

Our Courts remain garbage. By far the most politicized branch of government.

At least if the latter show signs of being contageous. The subjects — I mean citizens — we get to just lock up whenever we feel like. That’s what that means, right?