Migrants on the border told KTSM: “We’re just this close.” 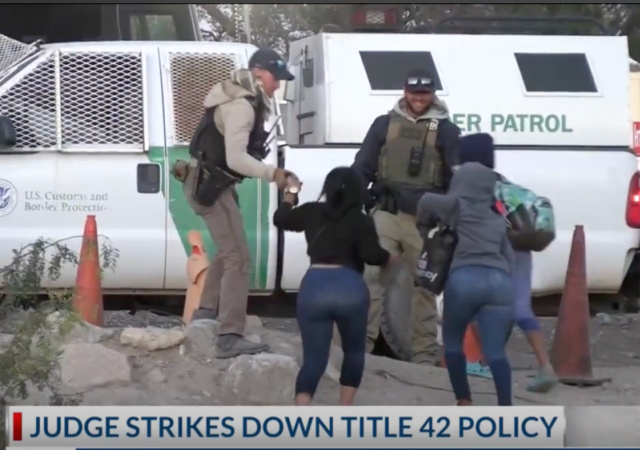 Judge Emmet Sullivan of the U.S. District Court in Washington, DC, ruled the American government cannot use Title 42 to expel migrants based on public health.

Sullivan agreed with the Plaintiffs that Title 42 was “arbitrary and capricious in violation of the Administrative Procedure Act.”

The plaintiffs are “a group of asylum-seeking families,” and the defendant is DHS Secretary Alejandro Mayorkas.

Title 42 originated in March 2020 at the start of the COVID pandemic, giving officials permission to quickly kick out migrants because of public health.

The Plaintiffs argued “that the Title 42 Process is arbitrary and capricious because the CDC (1) failed to impose the ‘least restrictive means necessary to prevent the spread of disease’ when implementing the policy and (2) failed to explain its departure from this ‘settled practice.'”

The standard came from the 2017 Final Rule, which “amended CDC regulations ‘governing its domestic (interstate) and foreign quarantine regulations'” after the Ebola and Middle east Respiratory System outbreak.

Sullivan disagreed, but the last explanation stood out to me:

Further, whether the specific goals of the 2017 Final Rule does not preclude a finding that the agency’s practice was to apply the “least restrictive means” test more broadly. After all, the 2017 Final Rule did not state that it was applying the “least restrictive means” test for the first time; instead, the CDC explained that the intent behind the rule was “to clarify the agency’s standard operating procedures and policies.” 82 Fed. Reg. at 6931. For example, in noting that the agency had “received several comments requesting the ‘least restrictive’ means with respect to quarantine and isolation,” the CDC not only clarified that it used the “least restrictive means” with respect to those two specific contexts, but also “agree[d] and clarifie[d]” that the agency sought to use that standard “in all situations involving quarantine, isolation, or other public measures.” 82 Fed. Reg. at 6912 (emphasis added). Defendants’ contention that the “least restrictive” standard applies only to U.S. citizens similarly fails because the CDC has clarified that it “appl[ies] communicable disease control and prevention measures uniformly to all individuals in the United States, regardless of citizenship, religion, race, or country of residency.” 89 Fed. Reg. at 6894 (emphasis added).

Plaintiffs also argued Title 42 was “arbitrary and capricious because the CDC failed to consider the harms to migrants subject to expulsion” and did not consider any alternatives.

Sullivan pointed out that “at the time of the August 2021 order,” COVID was already spread through America:

However, despite the above, Defendants have not shown that the risk of migrants spreading COVID-19 is “a real problem.”

As Plaintiffs point out, record evidence indicates that “during the first seven months of the Title 42 policy, CBP encountered on average just one migrant per day who tested
positive for COVID-19.” Pls.’ Mot., ECF No. 144-1 at 22 (citing Sealed AR, ECF No. 155-1 at 23). In addition, at the time of the August 2021 Order, the rate of daily COVID-19 cases in the United States was almost double the incidence rate in Mexico and substantially higher than the incidence rate in Canada.

The Department of Justice requested a five-week stay “to allow the Department of Homeland Security (“DHS”) time to prepare to transition to immigration processing under Title 8 of the U.S. Code.”

The Plaintiffs did not oppose the DOJ’s motion.

“We know that smugglers will lie to try to take advantage of vulnerable migrants, putting lives at risk.

“We continue to work with countries throughout the Western Hemisphere to take enforcement actions against the smuggling networks that entice migrants to take the dangerous and often deadly journey to our land borders and to address the root causes of irregular migration that are challenging our hemisphere as a whole.”

The government has ousted over two million migrants since Title 42’s March 2020 inception.

The Border Patrol expects a surge of migrants due to the ruling.

Already hearing from multiple Border Patrol sources that they will be expecting a significant surge/rush of migrants at the border once word gets around about this order, on top of numbers that are already at all times highs even with Title 42 in place.

1) They are BREAKING OUR LAWS by invading our country
2) You f*cking c*nts destroyed millions of American’s lives with covid lockdown measures, but it’s ‘arbitrary’ to do it to illegal invaders?

What do you expec from an affirmative action judge?

On October 3, 1984, Judge Sullivan was appointed by President Ronald Reagan to serve as an Associate Judge of the Superior Court of the District of Columbia.

Was this judge the same judge who refused to dismiss charges against Michael Flynn and hired his own attorney-another former judge?

If anyone knows anything about “arbitrary and capricious,”, it’s this Clown Judge Emmett Sullivan. It’s his entire judicial career.

He also ordered the mysterious halt to counts of all ballots in 2020. This is a DC judge and he ordered this for PA….no reason to do that unless he knows something about what is going on.

I recognize that judge’s name. Wasn’t he the absolutely atrocious one from the Flynn case?

Crazy thing is that this judge is a Regan, H.W., and Clinton appointee

Nothing crazy about it
They all belong in the cabel
RINOs and Dems, a damned difference between them

Regan a RINO, that is a LOL

You all too fast but was going to say Sully would use T 42 to kick out Flynn half a heart beat.

How about using Title 8?

Sullivan agreed with the Plaintiffs that Title 42 was “arbitrary and capricious in violation of the Administrative Procedure Act.”

LOL, coming from this idiot.

Sullivan should be sitting in a prison cell.

The Gentle Grizzly in reply to ThePrimordialOrderedPair. | November 16, 2022 at 4:25 pm

We’re it not for quotas, he’d be the boys vice principal in a Baltimore high school.

Why do you want to punish a failing school system like that?

On October 3, 1984, Judge Sullivan was appointed by President Ronald Reagan to serve as an Associate Judge of the Superior Court of the District of Columbia.

Isn’t this a collusive lawsuit, where both sides wanted the same result? Which is why they have made so nice about the remedy?

Another No Borders Leftist

“However, despite the above, Defendants have not shown that the risk of migrants spreading COVID-19 is “a real problem.”

The People, second. Our Posterity, third, or collateral damage. Emigration reform to mitigate progress at both ends of the bridge and throughout.

How about simply enforcing our immigration laws as they are written? Would that be some kind of revolutionary idea?

Unfortunately our immigration laws as written say that all an illegal entrant has to say is the magic words “I have a reasonable fear of persecution should I be sent back”, and they’re automatically entitled to a hearing, and to stay in the USA until then. And since there aren’t nearly enough immigration hearing officers (I won’t call them “judges” since they’re not) to handle the load in the last few years, they get a free pass for at least several years, by which time they will have built enough ties with the USA to make expelling them unpalatable.

Well Gov. Abbott just declared an invasion of TX. I wonder if “lead” treatments would take care of the risk of spreading disease?

— Toss anything the CDC wants to do just counts as good. Why? Both because they’re always wrong, and because they wish it.

— Judge Respect My Authoritah is a tool. I’m anti anything he’s for, for same as above.

— We can’t find legal, regulation, or administrative cover for “Hey, we have a border, and have said who gets in?”

Judge Emmet Sullivan….now where have I heard that political hacks name before…..

Sullivan is an utter disgrace; a transparently rabid, Dumb-o-crat partisan, to the core. His ruling confirms that illegal aliens possess more rights and deference from courts and Dumb-o-crat apparatchiks than American citizens do.

I haven’t forgotten his utterly disgraceful and biased conduct during the Michael Flynn trial, for which he should have been subject to disciplinary proceedings for blatant ethical violations.

But now they all gotta go around to AZ cause Abbot is gonna use the TXNG to send them packing… right? Right?

“A rule is arbitrary if it is not supported by logic or the necessary facts; a rule is capricious if it is adopted without thought or reason or is irrational.”

The only thing that seems to be arbitrary and capricious is the decision by that judicial snake Sullivan.

Looks like back in my grandparent’s time Sullivan would have shut down Ellis Island.

Why should that matter? By that reasoning you can’t expel anybody, since they’re probably worse off where they came from.

We should really kick Mexico’s butt over all this, they’re facilitating the movement of these invaders.

I am just sick and tired of everyone calling them migrants.
Why even bother with that?… call them what they are, immigrants..because we are stuck with them.

I agree, but, call them what they are- invaders.

The problem with lawyers (judges) is that they cannot see past the printed word. If a police officer sees five cars speeding together — but can only pull over one of them — how does he do so without it being arbitrary (picking anyone over the other without an apparent reason) or capricious (picking out one without appearing to be erratic or unpredictable)?

They were all speeding, so it is not capricious to pick out any law breaker without regard to weighing the pros and cons of not picking another. It is not arbitrary because he can only catch one speeder among the five.

But according to the distinguished jurist, this same action cannot be applied to a multitude of immigration law breakers. I dunno.

What’s the point of becoming the administration ascendant if you can’t wield authoritah “arbitrary and capricious.”

Asking for the party on the right side of history so hard, y’all have to be forced to get with the program.

Sullivan needs to be impeached or whatever mechanism exists to get him off the bench. He would be the definition of anti-American in the dictionary.